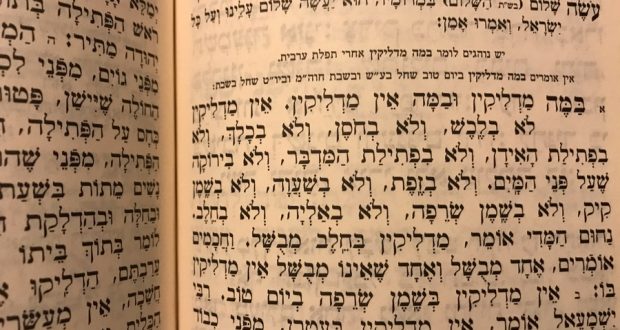 In the recently published issue of the Journal of Halacha and Contemporary Society (no. 75), Rav Avraham Yeshaya Cohen writes about the impact of praying alone (during Coronavirus) on the prayer services. In a sweeping, comprehensive article, he discusses the different prayers throughout the week and throughout the year, highlighting any changes that you may or may not have to make. Regarding Shabbos night services, Rav Cohen leaves one question unanswered.

Rav Ya’akov Ben Asher (14th cen., Spain; Tur, Orach Chaim 270) records the custom to recite the second chapter of Mishnah Shabbos (chapter “Ba-Meh Madlikin”) as part of the Shabbos night prayer services. He explains that we recite, really study, this passage because it discusses which oils and wicks we use for Shabbos lights and the three things a man should say in his home before Shabbos, two confirming key preparations and the third indicating readiness to light candles. Rav Yosef Karo (16th cen., Israel; Shulchan Arukh, ad loc., par. 1) says that Sephardim properly recite the passage before Ma’ariv. Rav Karo explains in his Beis Yosef (ad loc.) that Ashkenazim (and Middle Eastern Jews before the arrival of the Spanish exiles) recite the passage at the end of Ma’ariv. However, Sephardim say it before Ma’ariv begins so that if someone forgot to prepare appropriately for Shabbos, he will be reminded by the Mishnah and run to fix it. The Vilna Gaon (18th cen., Lithuania; Bi’ur Ha-Gra, ad loc.) asks pointedly, if you say the Ba-Meh Madlikin passage after Ma’ariv, what’s the point (mai nafka minah)?

However, commentaries explain the Ashkenazic custom to say the passage after Ma’ariv. Rav Avraham Gombiner (17th cen., Poland; Magen Avraham 270:1) says that we find little immediate, practical value in studying Ba-Meh Madlikin because it discusses different oils and wicks while today we light candles. He quotes Rav Avraham Klausner (14th cen., Austria) who says that Ashkenazim say the passage after Ma’ariv in order to allow those who came late to finish their prayers and leave together with others, rather than walk home alone in the dark.

Rav Cohen notes these two customs — to recite Ba-Meh Madlikin before Ma’ariv while it is still daytime or after Ma’ariv. According to the first reason, it makes sense to recite the passage even if you are praying alone because you might remember some preparation you forgot to do and fix it. According to the second reason, there is no need to recite the passage alone because you do not have a group from which someone might walk home alone. However, common Ashkenazic practice today follows neither approach. Today, Ashkenazim recite Ba-Meh Madlikin after Kabbalas Shabbos, before Ma’ariv. Because we recite it after we accept Shabbos, we cannot fix any preparation that needs to be done, even if it is still before sunset. Because he cannot explain the common practice, Rav Cohen cannot advise whether you should say it when praying alone.

Perhaps we can understand the current custom based on another halakhah. Under normal circumstances, during Ma’ariv we recite the Shema and its surrounding blessings followed immediately by the Amidah. It is important to avoid interruption between Shema’s blessings and the Amidah so we go straight from the theme of redemption into prayer. Rav Yosef Karo (Shulchan Arukh, Orach Chaim 236:3) writes that if you come late to Ma’ariv and everyone is about to start the Amidah, you should set aside the normal order and pray the Amidah with everyone else. Afterwards, you say Shema and its blessings.

Returning to our Shabbos discussion, the Ashkenazic custom used to be to say Ba-Meh Madlikin after Ma’ariv to allow time for those who came late to finish. What are they finishing? If someone comes late, depending on how late he comes and the pace with which he prays, he might say the Amidah with everyone else and then, while everyone else is saying Ba-Meh Madlikin, he says Shema and its blessings. In this way, he walks home with everyone else but loses the progression of praying Shema and then the Amidah.