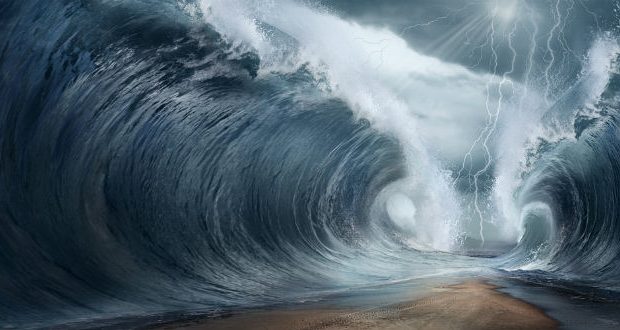 1) Shemos Rabbah 23:1 comments on the first verse of Shiras HaYam, “The Song of the Sea”:

“Then (אז) Moshe sang” (Shemos 15:1).[1]The entire phrase reads, אז ישיר משה ובני ישראל. This is the idea referred to in the verse, “Your throne has been affirmed since then (מאז); [You are eternal]” (Tehillim 93:2).[2]The entire verse reads, נכון כסאך מאז מעולם אתה. Rav Berechiah said in the name of Rabbi Avahu: [The verse implies,] although You are eternal, Your throne did not become established, nor were You known in Your world, until Your children said song. This is why it says, “Your throne has been affirmed since ‘then’.”

Thus said Israel: The truth is, You exist after You created the world just as You existed before You created the world, but You were – so to speak – standing, as it says, “He stood and measured out the earth” (Habakkuk 3:6). But once You stood at the sea and we said song before You with the word “then” (אז), Your sovereignty is established and Your throne is affirmed. Hence, “Your throne is affirmed since then” means, through “then Moshe sang.”

This midrash requires explanation. How are we to understand the imagery of God sitting and standing? And why was it specifically with the word “then” of the Song at the Sea that God’s throne was affirmed?

2) “Moshe stretched his hand forth over the sea, and Hashem churned the sea with a strong east wind all night, and He made the sea into dry land, and the waters split” (Shemos 14:21).

This is an idea whose source is in Bereishis Rabbah 5:5: “The Holy One, Blessed Is He, made a condition with the sea [at the time it was created] that it should part before Israel.” God performed many miracles since He created the world. Why was it this one in particular that required a condition in Creation? To answer these questions, let us examine some of the qualities of the medium of the miracle of the Parting of the Sea – water.

The Nature of Water

The Hebrew Language, the Holy Tongue, is the language of Creation. The world was created through God’s ten statements in that language. The words of other languages relate to the objects they describe arbitrarily. They are composed of random sounds chosen by their original speakers to denote particular concepts. The words of the Holy Tongue reflect reality.[4]Indeed, according to Rav Moshe Chayim Luzzato, Leshon Limudim, introduction to section 2, and Rav Tzadok HaKohen, Or Zarua LaTzadik, in the chapter entitled Mahus Lashon HaKodesh (“The Essence of … Continue reading) They bespeak the essence of what they stand for. With this in mind, let us consider the Hebrew word for water, מים.

One unique quality of the Hebrew word for water is that it always appears in the plural.[5]See the Vilna Gaon’s comments in Aderes Eliyahu to Bereishis 1:9 for another explanation of why water is always expressed by a plural noun. While this is not true of the English word water, something of this quality is present there, too, in that we do not speak of “a water.” Rav Elie Munk writes[6]The Seven Days of the Beginning, Feldheim, 1974. that the word מים is the plural of the word מה, “what.” He notes that a similar relationship exists in English between the words “water” and “what,” in German between the words wasser and was, and in Latin between the words aqua and qua.[7]This observation is the key to understanding Rashi’s comment to Bereishis 36:39. The verse speaks of Hadar, king of Edom, and says that that the name of his wife was Mehetavel daughter of Matred, … Continue reading

Rav Munk writes that these two qualities of the word reflect fundamental qualities of water itself. The plural nature of the word indicates a multiplicity associated with water. Its relationship to the word for “what” indicates its formlessness, because “what” is the most fundamental word that connotes lack of identity. The formlessness and multiplicity associated with water both point to the fact that it is the basic element of Creation in the earthly realm. All things on earth either came out of water or came out of the earth, which itself emerged from the water. The multiplicity of water reflects its attribute of being the source of countless different things and its formlessness and absence of color reflect its being the raw element out of which other entities took shape. Water is associated with purity for it is a step closer to its Divine source than are the things that have emerged from it.

Rosh Milin[8]On the letter mem. notes that these ideas can be seen in the letter of the Hebrew alphabet that represents water, the letter mem, which can be spelled מים, the same as the word for water. When the letter mem is used as a prefix, it means “from.” It denotes something that is a source for something else, just as water is the source of the other earthly elements of Creation. It is also part of the plural suffix ים-. The sound of the letter mem suggests the formlessness of water in that it is the only letter whose sound is pronounced with the mouth completely closed. In this sense it is less formed than other letters.

We cited the Midrash above that says, “The Holy One, Blessed Is He, made a condition with the sea [at the time it was created] that it should part before Israel.” As we have noted, the Baalei HaTosafos find an allusion to this Midrash in the words of Scripture itself. To understand the need for a condition in Creation for this particular miracle, let us examine the halachic concept of performing an act conditionally.

The conventional wisdom, and indeed, the opinion of most rishonim (medieval commentators), is that failure to fulfill a condition renders an act invalid because of a lack of consent on the part of the parties doing the act. Take, for example, a transaction such as purchasing an object. In order for such a transaction to take effect, both the buyer and the seller must consent to it. If the buyer says to the seller, “I buy this object only on condition that you do such-and-such tomorrow,” if the seller does not fulfill the condition, the purchase does not take effect because the buyer does not consent to it. Fulfillment of the condition is thus the culmination of the transaction.[9]According to Rav Chaim Soloveichik of Brisk, (Chiddushei Rabbeinu Chaim HaLevi, Hilchos Gerushin 8:13). the Rambam understands the dynamics of transactions made conditionally differently. (Why the … Continue reading

With this in mind we can begin to understand why God made a condition with the sea to part before Israel. For it was only when this took place and Israel sang out to God that Creation was completed. It was at this point that the formation of the Jewish soul was completed. From then on, the world was whole, with all of its components. Its evolution would progress through their perfection, not through the introduction of new types of entities.

The Resurrection of the Dead is the final stage of the world’s evolution. At that time the world will revert to the pristine state of purity that existed before the sin of Adam. There will be no tension between the spiritual and the material. Flesh will be as pure as spirit.[11]See Rav Moshe Chaim Luzzato, Derech Hashem, Section I 3:9 and 4:2. Through the experience of the Parting of the Sea, the Jews rose to the level where they had the potential to achieve this state. The Midrash tells us that the revelations that even a slave woman saw at the Sea were more intense than those of the prophet Yechezkel. The Jewish people saw then their direct link to God. They saw that they are immortal.

So the Children of Israel were not merely coming out of the Sea of Reeds. They were the final component of the universe emerging from the primeval waters of Creation. And all of the water on earth split when they came forth.[12]Rashi to the verse תכתב זאת לדור אחרון ועם נברא יהלל יה, “Let this be recorded for a later generation, and a created people will praise God” (Tehillim 102:19) … Continue reading

Up to that point, the King stood on his platform. He was still engaged in the work of Creation. But then His subjects recognized the full extent of His dominion and crowned Him Emperor. At that point He sat down. His work was completed.

Rabbi Yisrael Herczeg teaches at Sha'alvim for women. He is the translator of the ArtScroll Rashi, and the author and translator of several other books.