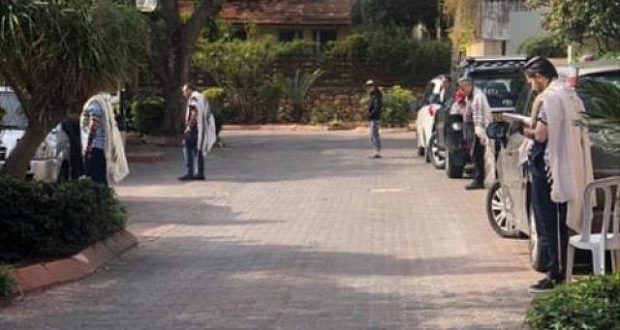 Question: My neighborhood is filled with outdoor Covid 19 minyanim.  I was walking down the street on Shabbat and a minyan across the street was in the middle of Kedusha. In such cases, do I need to stop, keep my feet together, and respond to Kedusha until they are done, or may I continue walking?

Answer: The Rashba (Shut HaRashba 1:249) was asked by someone who assumed that if after reciting Kedusha, one enters a shul reciting it, he would be forbidden to repeat it. The Rashba rejects this, arguing that there is no reason not to repeat Kedusha in this manner. The Rama (Orach Chayim 125:2) in paskening like the Rashba, rules that in this case one should do so. Some posit that not repeating Kedusha with the congregation would appear as if he did not agree with the concepts expressed, which is a disgrace (see Yabia Omer VI, OC 20). All agree to this concept regarding the first pasuk of Kri’at Shema (Shulchan Aruch, OC 65:2). Others explain that the opportunity to sanctify HaShem’s Name obligates one to do so (Igrot Moshe, OC III:89). Both pieces of logic also apply to Kaddish and Barchu, where the congregation joins together to sanctify HaShem’s Name (see ibid. and Mishna Berura 65:9). Answering Kedusha is important enough to allow one to recite its crucial sections during P’sukei D’Zimra and Kri’at Shema (Shulchan Aruch, OC 66:3 and Mishna Berura 51:8).

Yet, significant sources posit that there is just a preference rather than a full obligation to answer Kedusha outside one’s own minyan. Rav SZ Auerbach (as cited by Ishei Yisrael 24:(62)) notes that the language of the Shulchan Aruch (OC 55:20) is that one who is adjacent to a minyan reciting Kaddish or Kedusha may answer with them; he does not say they are required to. Rav Elyashiv is similarly cited regarding someone walking outside a shul (Tefilla K’hilchata 13:(119)). Others (see Ishei Yisrael ibid.) argue that while the Shulchan Aruch is focused on the ability to connect to a minyan one hears, if they are able, it is obvious that they must.

There is much discussion about the challenges of davening in a place like the Kotel. Many (including Rav Chaim Palachi in Nishmat Kol Chai I:4) assume that there is an obligation to answer other minyanim and recognize this can be unconducive to focusing on one’s own davening/minyan. That conflict between competing mitzvot allows some to raise concepts such as osek b’mitzva patur min hamitzva (see Tzitz Eliezer XI:3). Also, as part of a different minyan, continuing to daven with one’s own minyan looks less like rejecting the words coming from an adjacent minyan.

Street minyanim may raise other factors. Sometimes one is very close and/or in the same domain even when not part of the minyan. On the other hand, sometimes there can be “dirty matters” (e.g., garbage bins, dog droppings) in between oneself and the minyan, which may preclude answering (Shulchan Aruch ibid.)

Generally, we would posit that walking down the street, there is usually no compelling reason not to answer, which is what we expect one to indeed do. One is permitted to continue walking during Kaddish as there is never an obligation to not move (it is less respectful if he looks like he is ignoring it). Kedusha it is more complicated. While the Shulchan Aruch (Orach Chayim 95:1) requires having one’s feet together during Shemoneh Esrei, to “imitate” angels in service of Hashem, he writes regarding Kedusha that it is good to maintain that position, based on the same comparison (ibid. 4). There would still need to be a compelling reason not to do so. On a weekday, Kedusha takes less than a minute, even until the end of the beracha (there is some dispute as to when the status of Kedusha ends – Ishei Yisrael 24:26). On Shabbat, the additional liturgy within Kedusha not only takes longer but it is not considered a full-fledged part of Kedusha (see Mishna Berura 125:1 regarding learning quietly then). Therefore, one who has reason to make progress going down the street during the singing of those parts has what to rely upon.