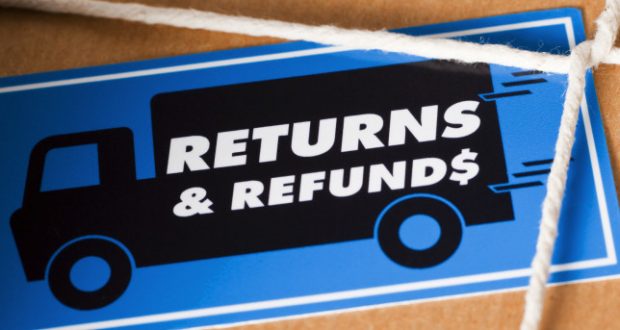 Inspector. Graphics on label artwork is my design. Thanks. Return the goods by a courier for a Dollar Refund. Close up of a brown paper parcel, tied with string and a Return & Refunds sticker.

Pressuring a Store to Take Back Purchase

Question: I bought something in a store and wanted to return it. The customer service person was reluctant to take it back, but I was persistent and she eventually agreed to it. Was it permitted for me to handle it as I did, or did I violate lo tachmod (I heard in a shiur that you can violate this when pressuring a store to give a refund)?

Answer: Our discussion relates to cases in which you do not have a legal right to demand a refund. In such a case, forcibly returning the object is like forcing someone to buy it. Regarding coercion to make a transaction, if someone is coerced to sell something and at the end says “yes,” the sale is final (Shulchan Aruch, Choshen Mishpat 205:1). When he is coerced to buy something, there is a machloket whether the purchase is final (Rama ibid. 12 – no; Pitchei Teshuva ad loc. 11 – yes). Even according to the Rama, it is hard to believe that you would try or succeed in coercing the store to take it back. When a civil person is just persistent, even if annoying, it rarely reaches such a level.

However, acting persistently to try to bring about a transaction in which the other side is not interested does raise questions of lo tachmod (see Shulchan Aruch, CM 359:10) one of the Ten Commandments. However, in this case, lo tachmod (not coveting) does not apply for a simple reason. All of the cases of lo tachmod that I managed to find in classical sources (starting from the examples in the pasuk) and quite a few contemporary sources referred to desiring to receive an object (or person) that belongs to one’s friend. It becomes forbidden when one wants it so badly that he attempts to get it “by hook or by crook” (see Rambam and Ra’avad Gezeila 1:9 for one discussion of the point of violation). They do not mention trying to sell something by pressuring a buyer.

I contacted the talmid chacham who gave the shiur you heard. The only source he found was a footnote in the Pitchei Choshen (Geneiva 1:(26)). He admitted that he was not sure lo tachmod applied. In fact, Minchat Asher (Devarim 9) argues convincingly that one can only be chomed an object that he wants. Wanting to sell something and receive financial compensation is not coveting anything. We point out that desiring money is not forbidden or even negative – we daven and have many sources looking positively about acquiring wealth and certainly a basic living.

It also is quite clear that the Pitchei Choshen did not contradict this thesis. He discusses, in close proximity, lo tachmod and the similar chamas. The difference between the two is that in lo tachmod the seller eventually agrees, whereas chamsan is when the seller never agrees (Bava Kama 62a – it differs from a ganav in that he paid for it). The Pitchei Choshen writes that chamas (not lo tachmod) applies even to one who forces someone to buy from him. While this is difficult on a couple of grounds (beyond our scope), it is more tenable for chamas to apply to selling as well, because in the case where there was never agreement, there is no sale, and therefore the “seller” had no right to take the money even after the fact. This is not the same idea of lo tachmod, which is over-desiring something that is off limits to you (even if some action is necessary to concretize it – see Rambam ibid.). In your case, you did not desire anything; to the contrary, you wanted to get rid of something that did not interest you and just recover the money you regretted paying.

The maggid shiur wrote to me that even if it is not formally lo tachmod, it has elements of it regarding the spirit of the law. I agree with this contention partially. It is bad middot to pressure people to do something that they do not want and are not required to do. But if one focuses on convincing the proprietor that if he does not agree, he will prefer patronizing a more accommodating store, which he has every right to do, that should not be a problem. If you pressured him obsessively or with improper tactics, that is against the spirit of the law … but not the spirit of lo tachmod.