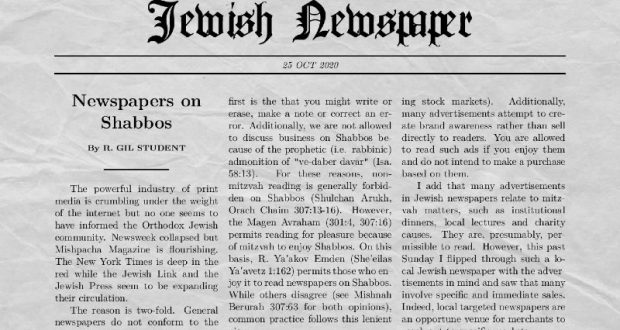 The powerful industry of print media is crumbling under the weight of the internet but no one seems to have informed the Orthodox Jewish community. Newsweek collapsed but Mishpacha Magazine is flourishing. The New York Times is deep in the red while the Jewish Link and the Jewish Press seem to be expanding their circulation.

The reason is two-fold. General newspapers do not conform to the same standards as Orthodox Jews and often promote views or discuss subjects we find objectionable and nearly always publish pictures we deem immodest. Orthodox Jewish newspapers often present general news so their readers need not expose themselves to outside media.

Perhaps more importantly, we observe Shabbos. One day a week, we turn off computers and gadgets to pray, study Torah, spend time with family and relax. Only the printed medium can satisfy a Sabbath observer’s religious requirements. Or can it? There is reason to say that we are forbidden to read any of these newspapers and magazines on Shabbos.

The Gemara (Shabbos 149a) prohibits reading “shtarei hedyotos,” which Soncino translates as “secular document.” Rashi defines shtarei hedyotos as business writings and Tosafos as personal mail. In practice, we follow both opinions and refrain from reading business material and personal mail (Shulchan Arukh, Orach Chaim 307:13). The exceptions to the latter, and whether they still apply today, deserve specific attention but here we will only focus on the former.

There are two possible reasons to forbid reading business material. The first is the that you might write or erase, make a note or correct an error. Additionally, we are not allowed to discuss business on Shabbos because of the prophetic (i.e. rabbinic) admonition of “ve-daber davar” (Isa. 58:13). For these reasons, non-mitzvah reading is generally forbidden on Shabbos (Shulchan Arukh, Orach Chaim 307:13-16). However, the Magen Avraham (301:4, 307:16) permits reading for pleasure because of mitzvah to enjoy Shabbos. On this basis, R. Ya’akov Emden (She’eilas Ya’avetz 1:162) permits those who enjoy it to read newspapers on Shabbos. While others disagree (see Mishnah Berurah 307:63 for both opinions), common practice follows this lenient view.

However, the permission includes an important caveat which led even R. Emden to advise against reading newspapers on Shabbos. You may not read business news or relevant advertisements because doing so violates “ve-daber davar.” In R. Emden’s time, the advertisements were printed in the back and this still invoked his concern that people may read them. Today, when they are interspersed within the pages so that even a casual reader cannot fail to see them, the concern seems even greater.

The mainstream approach of halakhic authorities is to advise against–but not forbid–reading newspapers (to those who enjoy it) and to caution against reading advertisements and news related to your occupation. Additionally, they offer blanket permission, even for those who are generally strict, to read Torah- and mitzvah-related news items (e.g. Shemiras Shabbos Ke-Hilkhasah 29:46; The Shabbos Home, p. 62).

R. Eliezer Melamed (Harchavos Peninei Halakhah, Shabbos 22:12:11) points out that advertising underwent significant changes in recent times. Advertisements are no longer the primary venue for identifying commerce opportunities (or, I add, for following stock markets). Additionally, many advertisements attempt to create brand awareness rather than sell directly to readers. You are allowed to read such ads if you enjoy them and do not intend to make a purchase based on them.

I add that many advertisements in Jewish newspapers relate to mitzvah matters, such as institutional dinners, local lectures and charity causes. They are, presumably, permissible to read. However, this past Sunday I flipped through such a local Jewish newspaper with the advertisements in mind and saw that many involve specific and immediate sales. Indeed, local targeted newspapers are an opportune venue for merchants to reach out to specific markets.

Based on all of the above, it seems that most authorities would permit reading Torah essays in newspapers on Shabbos. But because these papers contain many relevant advertisements, you should (but not must) avoid non-Torah articles. Which raises serious questions about the new print media targeting Orthodox Jews with general and local news and targeted advertising.