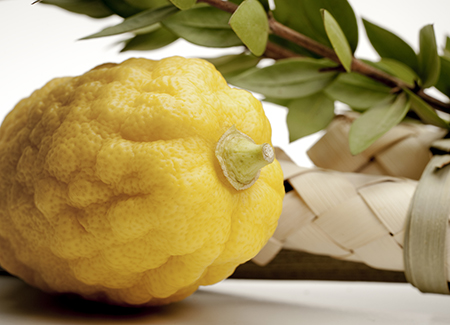 The Redemptive Power of the Etrog

The very first sin in human history was when Adam and Eve ate the forbidden fruit, but the Bible never specifies what that fruit was. In some circles, there is widespread—but mistaken—belief that the fruit was an apple, apparently because the Latin word for “evil” and “apple” are spelled similarly: mālum vs. mălum.

Really, a mistake like that could happen to anyone.

But if it wasn’t an apple, then what was the fruit? According to Jewish tradition, there are four possibilities: Rabbi Meir says it was wheat, Rabbi Yehuda b. Ila’i says it was grapes, Rabbi Yosi says it was figs, and Rabbi Abba from Acco says it was a citron (etrog) (see Genesis Rabbah 15:7).

Why does this all matter?

There is a famous teaching of Maimonides as follows: “What is complete repentance [teshuvah gemurah]? It is when on object with which one has sinned comes into his hand and he can sin again with it and he separates and does not perform [the sin] because of his repentance” (Hilkhot Teshuvah 2:1).

Many of us are familiar with the idea that complete repentance is effectuated, or at least revealed, in the case Maimonides describes: if someone is struggling to overcome a certain undesirable habit, and finally prevails, and separates himself from the object of temptation, and does not commit the sin, then we can be certain that this person has achieved a complete repentance of his past misdeeds. This is something completely admirable, praiseworthy, and noble.

However, there are other parts of Jewish tradition that seem to take this point of repentance even further.

As one example, in the book of Joshua, the eponym of the book dispatches spies to the land of Israel, when they come upon Rahab, a prostitute who lived in the wall of the city. Scripture explains that she lived in an elevated apartment, and to enter her place of business, Rahab’s patrons would have to ascend using a rope. The text also explains that Rahab hid the Israelite spies from the local kings and soldiers who were pursuing them. After the spies explained to Rahab that they are Israelites (and the renown of the splitting of the sea seems to have been a widespread), she facilitated their escape—using that same rope. According to Jewish tradition, Rahab whispered a prayer before letting them go: “Master of the universe, with these I have sinned. With these may You forgive me” (Rashi on Josh. 2:15, quoting Zevachim 116b).

Another example: there is a famous debate about whether the Tabernacle itself was commanded before or after the sin of the Golden Calf. According to the opinion that the Tabernacle was given after the Golden Calf, the standard explanation is that the people needed a centralized place to worship God, even in the wilderness. However, the Midrash takes it further and points out that in both cases, the gold itself was given in excess. The Midrash explains: The Holy One, blessed is He, said, “let the gold of the Tabernacle come and atone for the gold of the calf.” Furthermore: The Holy One, blessed is He, said to Israel, “When you made the Calf, you angered Me by saying ‘this [eileh, lit., “these”] is your god.’ Now that you have made the Tabernacle, with ‘these [eilah] [are the amounts for the Tabernacle]’ (Exod. 38:21), I am appeased by you. This is the meaning of “these are the amounts for the Tabernacle” (Exodus Rabbah 51:8).

A final example: The Jerusalem Talmud recounts that Rav Isi was taken hostage (JT Terumot 8:4). At the time, Rabbi Yochanan, one of the leading rabbis of the time, saw no opportunity of release, and was willing to concede the death of his colleague. However, Reish Lakish—a reformed criminal turned rabbi—was able to channel the lessons his life as an outlaw, and secure the release of Rav Isi. Had Reish Lakish merely forgotten his life of thuggery, Rav Isi would had died in captivity. (I have heard this story from Rabbi Ari Kahn on several occasions.)

In the cases of Rahab, and the Tabernacle, and Reish Lakish, rabbinic tradition goes out of its way to point to the redemptive nature of something previously used for sin: The gold for the Calf was redeemed with the gold for the Tabernacle. It’s not just that the Tabernacle filled a social need for a place of centralized worship; the act of constructing the Tabernacle atoned for the act of building the Golden Calf. Similarly, Rahab’s string was used to lift men up to a situation of sin, and later became her salvation. Moreover, according to one tradition, Rahab eventually married Joshua and eight prophets descended from her (BT Megillah 14b). And Reish Lakish, the repentant outlaw, was able to redeem his life of crime to save the life of his colleague Rav Isi.

Let us then return to Maimonides: according to him, is the highest level of repentance merely to separate from an object of sin? Possibly yes. (There is a rather cryptic Maimonidean passage that can be read in multiple ways; see Hilkhot Metammei Mishkav u-Moshav 10:10.)

However, based on the passages about Rahab, the Tabernacle, and Reish Lakish, it is clear that we should not be afraid to re-engage with an object that previously led us to sin, so long as we make use of it for a holy purpose. This might be true even for the three cardinal sins of Judaism: murder (Reish Lakish, according to some opinions), sexual transgressions (Rahab), and idolatry (the Jews at the Golden Calf) can be atoned for—redeemed, even—when reconstituted for a Godly end.

And perhaps this is message is central to the opinions of what Adam and Eve ate in Eden. To review: they didn’t eat from an apple; the forbidden fruit was either figs, grapes, wheat, or an etrog. Figs, more specifically fig leaves, were used as clothing after the primordial couple realized they were naked (Gen. 3:7), which points to an extremely penitential act, where the object of their sin was later used to clothe themselves.

Grapes are trodden into wine, and wheat is harvested and kneaded into bread, for the sanctification of the Sabbath and festivals. And if we remember that Adam and Eve committed their sin nearing sundown on Friday afternoon, then it is interesting that the impending Sabbath should be sanctified by these species. According to this opinion, the object of sin is used to sanctify the Sabbath itself.

And the etrog? It is taken, accompanied by three other species, on the first day of Sukkot, as the verse says, u-lekachtem ba-yom ha-rishon, “and you shall take on the first day.” The Midrash explains that the word rishon adds something—rishon le-cheshbon aveirot, “first [day of the year] for the tabulation of sins.” According to this Midrash, between Yom Kippur and Sukkot we are so involved in preparing for the holiday that there is no time for us to go astray. Therefore, we would not even have the realistic possibility to sin until the first day of Sukkot, once the preparations are complete.

What then do we do on the first day of Sukkot? We hold the etrog high in the air. We raise the object that, according to R. Abba from Acco, represents humanity’s first sin, and shake it in the six directions where God (so to speak) reposes.

And this is exactly what we are expected to do, and what we are commanded to do. We transform the object of our sin into an object of piety. This is our redemption, and this is how we enter the new year: we tell God, and ourselves, that we can do better this year. No doubt, we were all faced with challenges in the waning year, and we were all confronted with objects that caused us to stumble in the past. And that is the message of the etrog: Challenges that once confounded us can be overcome in the present year. There is certainly a place for Maimonides’ opinion that we prove our repentance by withdrawal from difficult stimuli. In some cases, that might be the best that we can do.

But in other situations there is still a higher level that can be achieved. We need not eschew anything that once led us to a path of sin; we can find a way to redeem it, and find meaning about it in the realm of the permitted and holy.

Alec Goldstein received his rabbinic ordination from Yeshiva University. He is the author of A Theology of Holiness and is the founder of Kodesh Press. He can be reached at [email protected].