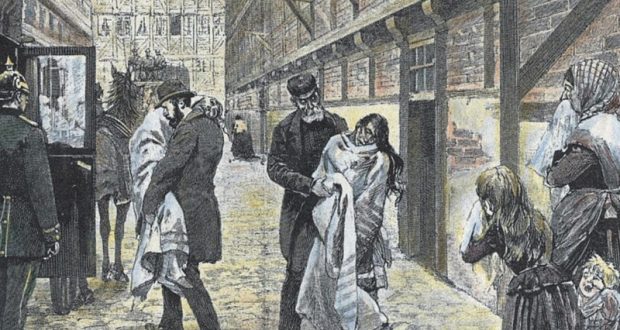 A Derashah During A Plague

The 1848 (5608-9) cholera epidemic has become famous in Jewish history because it was the moment when the 37-year old Rav Yisrael Salanter first took on a leadership role. Rav Dov Katz, in his Tenu’as Ha-Mussar (vol. 1, ch. 12), describes how Rav Yisrael mobilized a rescue effort, secured a 1,500 bed hospital and volunteer doctors and nurses, and ensured that patients were properly cared for even on Shabbos. He also, controversially and against the wishes of most rabbis in Vilna, made kiddush in shul on Yom Kippur and insisted that everyone must eat as a life-saving measure (although testimonies vary about exactly what happened).

However, Rav Yisrael Salanter was not the only rabbi who saw the danger and insisted that people eat on Yom Kippur. Rav Yosef Chaver Wildman, son of the famous student of the Vilna Gaon’s disciples Rav Yitzchak Isaac Chaver Wildman, served as the rabbi in a number of towns in Poland, including Jedwabne and Knishin. On Rosh Hashanah 5609, he delivered a powerful sermon on the subject of the epidemic which he later published in his Sha’ar Yosef (seventh derush). What follows is a summary of this impassioned speech, based largely on the summary provided by R. Dov Eliach in his Peninim Mi-Shulchan Gavo’ah (Deut. 20:2) but with additional material from the published derashah:

Every action and activity in the world is done in combination between an act of man and the guidance of the Creator, as it says, “And He… will bless you in all that you do” (Deut. 15:18). God’s blessing does not rest on an empty vessel, rather it “gives seed to the sower and bread to the eater” (Isa. 55:10). Even miracles that deviate from the natural path of the world require some prior human act, like the splitting of the Reed Sea through Moshe’s lifting his staff, and likewise all the plagues in Egypt. On the other hand, the Jewish people were commanded that in all these material matters, in order to succeed they must do at least some minor act to demonstrate that they are relying on God’s help and placing their faith in Him. Therefore, when a man plows his field, “you shall not plow with an ox and a donkey together” (Deut. 22:10); when he plants, “you shall not sow your field with two kinds of seeds” (Lev. 19:19); when he harvests, “you shall not gather the gleaning of your harvest” (Lev. 19:9). And similarly in all human activity, there is one mitzvah that reminds him, “it is from the Lord that a man’s goings are established” (Ps. 37:23).

Similarly, when waging war, the Jewish people must combine human and divine action. When going to battle, the Jewish army would prepare in all necessary ways like any other army, rather than rely on a miracle. However, the Torah commands them, “and the kohen shall approach and speak to the people” (Deut. 20:2). Ramban explains that the kohen’s words are intended to strengthen people’s fear of and faith in God, not to enforce military discipline like the police who monitor their activity. Since the people have to show some sign that they are primarily relying on God, that He fights their wars, the kohen has to explain that in specific situations they should abandon traditional military tactics and place all their faith in God. Specifically, when they approach someplace particularly dangerous, when fear causes soldiers to tremble and retreat, in such cases they should place their faith in God and see victory as certain.

Similarly, added Rav Yosef Chaver, as we stand at war against the afflictions of the day, when death rises in our windows, the doctors have given us instructions on how to preserve our health that obligate us from the Torah’s command, “take good care of yourselves” (Deut. 4:15). Much of the damage is caused by foolish hearts who wish to be pious with their Creator and act strictly by fasting and the like in ways that damage physical health. They think that in this way, by placing themselves in present danger, they find favor in God’s eyes. But the truth is the opposite. These actions raise memory of sins, utilize and reduce a person’s merits and bring judgment on him.

The Creator’s command is to guard our health and follow all that the doctors tell us. If so, it is forbidden for someone to be strict on himself and fast because doing so is dangerous in this time. But we have to be careful not to pray quickly so we can eat. It is better to say less with proper intent than a lot with little intent. Just like our ancestors, when they went to battle were commanded, “fear not nor be alarmed” (Deut. 20:3), we too place our faith in God and will not be alarmed by the obligation to eat.