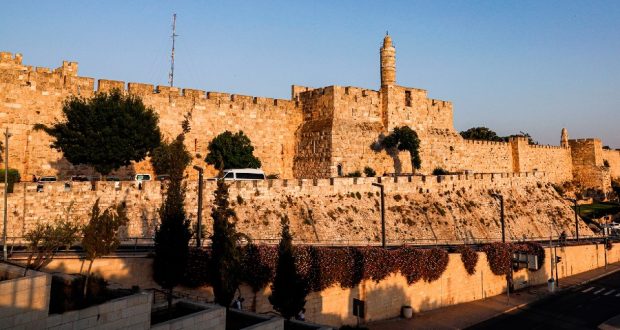 All Go Up To Jerusalem

R. Eliyahu Bakshi-Doron served as the Chief Sephardic Rabbi of Israel 1993-2003. He passed away this past April.

This conference dealing with the topic of “Yerushalayim in Halacha” is a fulfillment of “Sha’alu Shelom Yerushalayim – Seek the Peace of Jerusalem”. During these days of the month of Av, after we rise from mourning the destruction of the Beit Hamikdash and Yerushalayim, and read the haftarah of “Nachamu, Nachamu Ami – Comfort, comfort my people…speak to the peace of Yerushalayim”, it is appropriate for us to expound for the peace of the city, as the Gemara in Rosh Hashana (30a) tells us:

We fulfill “Seeking Yerushalayim” by learning and knowing the halachot related to it, for in them are its completion and glory.

During this time period we witness two difficult struggles over Yerushalayim. One is on the diplomatic front, a struggle between us and our enemies who seek to divide Yerushalayim and abandon its residents and builders. The second struggle is over the character of the city as a Holy City; this is a struggle over its streets, over its Shabbat and Holidays. These struggles are different from each other, but simultaneously also dependent on each other, because all of the strength of our merit and our grasp on Yerushalayim is by virtue of it being a city of Hashem, founded on mountains of holiness. The more we can guard its unique character and holiness, to that same extent we will be able to shore it up as the city that “unites us all together.”

Yerushalayim is the heart of our nation — of every single Jew wherever they are — and neither Judaism as a religion nor any Jew as an individual has any right to separate from or forget Yerushalayim. This deep soul-connection which exists even Yerushalayim’s state of destruction is expressed by David Hamelech: “If I forget you Yerushalayim, may my right hand forget its cunning, may by tongue cleave to my palate if I don’t recall you, if I don’t place Yerushalayim above my chief joy.” (Tehillim 137:6). Contemplate this verse and you will see that it is not merely an oath or pledge to remember Yerushalayim or pine for her; rather, it is an active statement expressing the connection between each Jew and Yerushalayim. It is from this that emerges the Halacha of “everyone can compel (their spouse) to go to Yerushalayim, but none can compel (their spouse) to leave” (Mishnah, Ketubot 13:11) — even nowadays, from the verse of “if I don’t place Yerushalayim above my chief joy.” From this we learn to remember Yerushalayim at a time of joy, not merely a pledge to remember our pain over Yerushalayim even at the time of our greatest joy, but it is in fact a Halacha of Hilchot Ishut as we will explain.

Among the Sheva Brachot instituted by the Sages is:

“Sos Tasis – Rejoice, oh barren one, with the ingathering of your children within you with joy”

The source for this blessing is the verse of “If I don’t elevate Yerushalayim above my greatest joy.” From this we can learn the significance of Yerushalayim, and its connection to every bride and groom, and for that matter every Jewish home. The language of the blessing is “Sos Tasis Vetagel Ha’akara Bekibutz Baneha Letocha Bsimcha” and it ends with “Mesame’ach Tzion Bevaneha.” The Sages chose language based on the words of the prophet who said, “Rani Akara Lo Yalada — rejoice, oh barren one who has not given birth” (Yeshaya 54:1), which describes Yerushalayim in its state of destruction as a barren, childless woman whose joy comes when her children gather within her. This description of Yerushalayim as a “mother” and not merely a “homeland” reminds every Jewish bride and groom during their Chuppa that they are not only the offspring of their biological mothers, but that they are also children of Yerushalayim and everything the city represents. And just like a child has a deep soul-connection to his mother and father, so too Yerushalayim is connected to its children, and its children to her. Our father is Hashem; our mother is Yerushalayim, like the prophet says, “like a youth espouses a maiden, Your sons shall espouse you. And as a bridegroom rejoices over his bride, so will your God rejoice over you.” (Yeshaya 62:5)

What makes Yerushalayim special? What makes her the mother to all of her sons and daughters and defines why she is more beloved than the rest of Eretz Yisrael, and why the Halacha is so clear that “everyone can compel to go to Yerushalayim, but none can compel to leave”? King David in Tehillim (87) makes the answer clear: “To the sons of Korach a mizmor song: its foundation is in the mountains of holiness, Hashem loves the gates of Zion more than the dwelling places of Yaakov, those how are honored will speak within you city of God, Selah.”

The verse emphasizes the cherished status of Yerushalayim because its foundation is in “mountains of holiness,” which the midrash (Yalkut Shimoni, Tehillim, ad loc.) tells us is referring to Mount Moriah and Mount Sinai, which was transported to Yerushalayim. These two mountains, respectively representing Torah and the Jewish people’s dedication to the Almighty, unite in Yerushalayim as the “city of God,” for “the Jewish people, the Torah, and the Almighty are one.” This is the place that “those who are honored will speak within you,” because this is the gate of heaven, the place which binds the Jewish people to Torah and to Hashem. Therefore, “Hashem loves the gates of Zion more than the dwelling places of Yaakov, those who are honored will speak within you city of God, Selah” — the “city of God, Selah” tells us that this is forever and eternally the city of God, and also tells us a Halachic rule: what makes Yerushalayim greater than their other “Dwelling places of Yaakov” and the rest of Eretz Yisrael? The rest of the land’s holiness is dependent on certain conditions of conquering and sanctifying and is therefore subject to a debate of whether the first sanctification was limited to the past as well as for the immediate future, or only for the distant future of the world to come. However, in contrast, the sanctity of Yerushalayim is a holiness which is fixed and exists for all generations as an eternal city of God.

Indeed, it shall be said of Zion, ‘Every man was born there.’ He, the Most High, will preserve it.”

The difference between Cush, Pleshet, and Tzur on the one hand and other lands is that one who is born in that land is called by his birthplace, but it is purely a geographic reference point. However, “To Zion it is said each man is born in her”- not “there” but “in her.” Yerushalayim is not merely a place of birth, but it is the mother who gave birth, each man is born in her, not merely there. This is because it was so designed from above. The creator of all souls created the Jewish soul with the format of Yerushalayim, and the Master of all wombs built Yerushalayim as the city of Hashem which is specially designated for her sons and daughters. Hence the comparison of the prophet of Yerushalayim without its children to a barren woman who hasn’t given birth, and her joy when her children are gathered within her.

It is in this light that we can understand the Gemara (Ketubot 75a). “‘And to Zion it is said each man was born in her’ (Tehillim 87:5), whether one was born in her or looks forward to seeing her.” It is not the geographic reality of where you are born that determines if you are a child of Yerushalayim. Rather, it is your very essence as a Jew which binds you with a soul-binding. Therefore one who strives to see her is like he was born in her.

Yerushalayim’s elevated status above the other cities of Eretz Yisrael even nowadays is explained by the Chatam Sofer (Y”D 234) and Avnei Nezer (Y”D 456) that Yerushalayim has an independent holiness as the place that “Hashem commanded the blessing,” as the gate of heaven. Also, Yerushalayim was sanctified even before Eretz Yisrael, because the Avot prayed there, the Akeida took place there ,and before that Kayin, Hevel, and Noach brought Korbanot there. Even if there is no commandment to live specifically in Yerushalayim, it is certainly a great merit to be close to the Shechina and feel its holiness, like children close to their parents’ table.

Every Jew — wherever they may be, even if born in another country — is connected with a soul-connection to Yerushalayim and has dual citizenship, that of his own land and that of Yerushalayim. This is accomplished through the mitzva and merit to go up and live in it, like the verse says, “And to Zion it is said each man was born there” — whether one was born in her or looks forward to seeing her.

Based on all of the above, the blessing of “sos tasis vetagel ha’akara” in Sheva Brachot is not only a reminder to “elevate Yerushalayim above all joy,” but also a reminder to every bride and groom that wherever they may be, they are children of Yerushalayim. The city is waiting for them, and it is their privilege and obligation to go up to her.