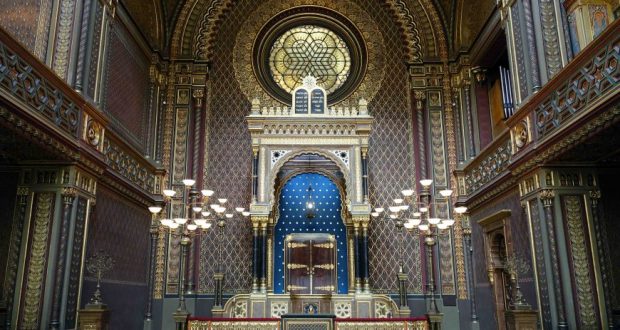 Posted by: Gidon Rothstein in Halachah Category, Posts, Shul May 19, 20 0

I am pivoting away from direct discussion of our current time of trouble—as I pray the signs of relief show Hashem is giving us respite to learn the lessons of the trouble, react properly enough for Hashem to spare us any revisiting of it—and taking up issues the Shulhan Arukh presents regarding shuls, in the hope our discussions will serve as part of our prayers to Hashem to let us reopen our shuls with wisdom and safety, as soon as can be done with wisdom and safety.  Last Shabbat, we would have read of the warning Hashem might lead to our shuls being shamem, desolate; woe are we who saw the warning come to fruition, and as places begin to reopen, may our shuls become places of remarkably admirable avodat Hashem, a shining example Hashem will be loath to ever force close again.

Before I get there, two quick thoughts occurred to me. First,  James Garfield was president of the United States in 1881 when a man named Charles Guiteau shot him. Garfield eventually died, but I believe the consensus now is he was killed by the doctors reaching into the wound with their unwashed hands to try to remove the bullet, infection and sepsis setting in and killing him. Sometimes, our best intentioned efforts, engaged with a confidence our current ignorance should not allow, can make matters worse.

Second, for a few years I have been troubled by the view of R. Yehoshu’a, Sanhedrin 97b. In the course of a debate with R. Eliezer about the necessity of repentance for the advent of the Messianic era, R. Yehoshu’a says should the Jews fail to repent, Gd would bring a king whose decrees were as harsh as those of Haman, the Jews would repent (and Mashiah could come). Rambam gives a gentler version in Hilkhot Teshuvah 7;5, saying only the Jews have been promised they will eventually repent, citing Devarim 30;1-2.

I have been troubled by how the legacy of Hitler fits that Gemara. Perhaps the Jewish people’s reaction to the Holocaust counted as repentance sufficient for Mashiah to come, and the past seventy years have been the slow advent of that era. Certainly the Zionistic among us might see it that way, with some justification, given the State, the reunification of Jerusalem we celebrate with Yom Yerushalayim later this week, and the undeniable rise in Torah study across the span of Orthodoxy, and even of non-Orthodoxy.

(In non-coronavirus years—maybe even somewhat this year, as Hashem seems to be releasing our brethren in Israel in time for some meaningful tikkun leil Shavuot events–Shavu’ot night in Jerusalem has become an event for those not yet focused on Gd’s service, u-mitokh she-lo lishma ba lishmah, one step leads to another, we hope and pray.)

But if not, if Hitler wasn’t harsh enough to bring the repentance necessary for Mashiah, I wondered to myself and sometimes aloud, what kind of king and decrees would it take? Well, this week, I also wondered whether maybe R. Yehoshu’a’s “king” had to be human, maybe Rambam wasn’t gentling R. Yehoshu’a, he was expanding the options, maybe, if we have the wisdom, this current et tzarah could also be a “king,” whose decrees certainly seem as harsh as those of Haman, could then be a spur to repentance and Mashiah.

The Obligation to Build Shuls

One way it might spur us is in rethinking our communal connections. Shulkan Aruch Orah Hayyim 150 (the first of seven chapters on rules of Beit Ha-Kenesset) opens with the idea of coercion, kofin benei ha-ir zeh et zeh, the members of a community can force each other to build a shul and to buy Torah, Nevi’im, and Ketuvim, texts of Scripture.

Two claims, each worthy of further consideration: members of a community can coerce each other, and then what it is they can make each other do. For the first, Arukh Ha-Shulhan turns our attention to Hoshen Mishpat 163;1, where Shulhan Arukh has a broader list of the communal needs open to coercion (protective walls and gates, for example). Rema there includes hakhnassat orhim, taking care of travelers needs, food and lodging, and giving charity.

It’s an idea conspicuously foreign today, where communal participation feels almost entirely voluntary. I have seen synagogues suggest an amount for each member to pay, without any real expectation they can enforce it, expecting voluntary donations will really be what covers the bulk of the costs. Rema’s version gives the community the right and ability to assess and collect.

Where people disagree about the need to build a shul, sometimes the answer is clear. For example, Arukh Ha-Shulhan says a rental space is not sufficient where the community has the funds to build and dedicate a space to synagogue purposes—those who want to stay in the rental space are overridden. The same will be true of repairs; those who claim they don’t mind a leaky ceiling or whatever are overridden.

On the other hand, Arukh Ha-Shulhan does not think of redecorating the shul as a clear enough need to force people, nor building a new shul if the existing one feels cramped to some. Those who disagree can claim they are comfortable in the existing space.

The Road to Decisions Incumbent on All

Complicated stuff. What do we do in cases of disagreement? While today, I think those who want to do it differently would go off and do it their own way (redecorate the shul with funds they raised without forcing anyone, for example), Rema offers two other ideas. First, he says all the taxpaying community members should gather, and accept a herem to speak only le-shem Shamayim, to share only their honest appraisal of the best course of action, and then agree to follow the majority.

After such a community meeting, Rema thinks the majority can coerce the minority, even taking them to secular court (rarely a preferred option). Another way to handle such disagreements is to go to beit din, rabbinic court, although the court members cannot have any financial stake in the outcome.

It is, already, a picture of community at odds with our current one. Many of us might think we have it better, but I think there’s something lost as well, in two ways. First, our inability to impose communal discipline hurts us where there are important reasons to impose such discipline, such as (most clearly in our times) in bitter divorces. Second, the voluntary nature of communal contributions gives more power to those interested in gathering it, those who will do the hard work of soliciting contributions, and/or have the means to make such contributions.

The Scale of Payment

In the old system, Arukh HaShulhan notes debate about how to assess. Some thought it was purely a matter of financial ability, although the community decided each member’s ability. Members who thought they had been overcharged would have to plead their case to communal leaders, an obviously complicated arrangement. (I once saw a responsum of R. Betzalel Stern about a man who went to the local secular authorities to declare himself lacking in religion rather than pay what he saw as an unfair assessment).

Others favored a system known as hatzi le-fi mamon, hatzi le-fi nefashot, half the money would be raised based on means, half as a poll-tax. Rema says in his community, they did not have to, because they sold seats in shul, and the money raised covered construction. The value of the seats varied according to location, such as along the eastern wall, the most valued seats in the building.

Here, too, lie complications and pitfalls. I remember a teacher once speaking derogatorily of a large shul he had attended as a visitor for a weekday Minhah, when the shul was almost empty, but a member came to tell him he was in someone’s seat. Yet, in a world where seats are sold, they became the literal and legal possession of the buyer, property to bequeath to heirs, a real asset. It also gave members a stake in the shul’s health today’s communities do not have—if the building gets run down, it affects each member’s financial standing as well.

Every system has downsides, and Arukh HaShulhan knows of arguments about whether to sell aliyyot, hire a hazzan, or other expenses. Ideally, the community works it out, but where that doesn’t happen, they were supposed to go to a beit din, a rabbinic court.

The last half of the first paragraph of this chapter (the rest of the chapter is about the physical structure of the shul, so I will move on to the next chapter next week, Gd willing) gives members the right to force each other to purchase books of Scripture—Torah, Nevi’im, and Ketuvim— as well.

Magen Avraham pointed out the rule should apply differently already in his times, because people no longer learned solely from written books of Scripture. (In the time of the Gemara, the Oral Law was still oral). He therefore held the mandatory shul library, which members could coerce each other to support, had to include sets of Talmud with commentators, for young and old to learn.

Two hundred years later, Mishnah Berurah thought matters had changed again. Where many people had private libraries, people had access to books anyway, so there was less of a right to make it a communal issue.

For our times, I wonder in two directions. First, many shul libraries today are only available when services are going on, because the shul is otherwise locked (that’s aside from the current et tzarah, where even as shuls reopen, no one can use shul books). During services, though, we are supposed to focus on prayer. Although intended to be a resource for the community, today it often is not.

On the other hand, the use of books seems to be trending down in our times, other than Shabbat and Yom Tov. Might there come a time when communal members should force each other to provide subscriptions to Torah services, or would this be even more what the Mishnah Berurah meant, that the fairly easy availability of avenues of learning should mean the community is now exempt from providing that service?

To me, the paragraph is one of those where the ruling of the Shulhan Arukh is no longer fully obligatory, either because it cannot be implemented, or because circumstances have changed. Either way, the paragraph lays out a vision of community to compare to our current one, to be sure we have retained all the valuable parts of the system Shulhan Arukh itself envisioned, even as life changes as history rolls along.