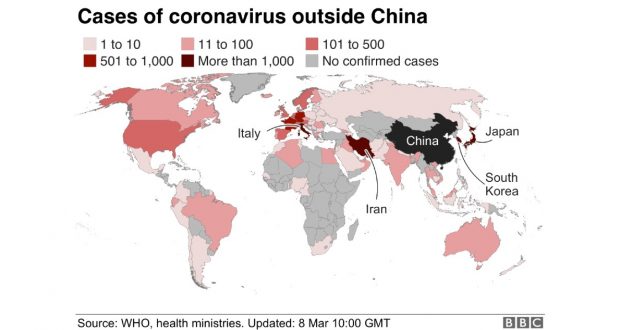 I. Should You Flee?

While the currently growing epidemic of Coronavirus is not dangerous for most people who are not in high risk categories, we can still ask whether any epidemic or plague poses a life-threatening danger. After all, God determines on Rosh Hashanah who will live or die in the upcoming year. Someone who is judged for life should presumably survive any epidemic. This question has practical implications. Is it permissible or even obligatory to flee from a city suffering from an epidemic? This was very relevant in pre-modern times when poor hygiene allowed disease to spread quickly. Even in a global epidemic today, maybe you can flee to a more isolated location, perhaps self-quarantine or to a cabin in the woods, although that kind of isolation will result in other religious and social trade-offs. Setting that aside, we can ask whether this will work or God find other messengers to fulfill the divine decree.

In Shulchan Arukh (Yoreh De’ah 115:5), Rema writes that you should flee a city in which there is a plague. However, he does not explain why. Pischei Teshuvah (no. 8) and Darkhei Teshuvah (no. 95) cite as support for this ruling a responsum from the 15th century Algerian Torah scholar, Rashbash (Rav Shlomo ben Shimon Duran, son of Rashbatz). To understand this ruling, we need to explore the power of the Rosh Hashanah decree and its exceptions, if any – although keeping in mind that we are looking at the hashkafah aspect and not encouraging fleeing or other kinds of panic in this situation.

The Gemara (Kesubos 30a) states that everything is in the hands of Heaven except for cold and heat, because we can cool and warm ourselves to counteract the environment. Therefore, we sometimes (so, Rashi) suffer from heat or cold due to our own negligence in preparation. Tosafos (ad loc., sv. ha-kol biydei) point out that this does not mean that we should fail to protect ourselves from other dangers, since they are in the hands of Heaven. If one walks under a shaky wall, one risks the wall falling on him. Rather, such cases of negligence – or even r”l suicide – are always in mortal hands. The Gemara is only discussing uncontrollable dangers and stating that cold and heat fall within the category of controllable.

Rav Elchanan Wasserman (Kovetz Ma’amarim, p. 47) infers from this discussion that Tosafos consider suicide to be entirely within human control. Even if God decrees that a person will live throughout the year, the person still retains the ability to commit suicide. Rav Wasserman then proposes an alternate approach.

Rambam (Mishneh Torah, Hilkhos Teshuvah 6:5) asks why the Egyptians were punished for enslaving the Jews when they were merely fulfilling God’s decree. He answers that while someone would have fulfilled God’s decree and subdued the Jews, the Egyptians did not have to be the ones to do it. They were not forced to commit the evil and therefore they were punished for it.

Ramban (Gen. 15:14) disagrees. It is true that if God decrees that someone will die in the upcoming year, whoever kills him is guilty of a crime even though he is fulfilling God’s decree. However, a prophecy is different. The fulfillment of a prophecy is a mitzvah. The Egyptians were punished because they were overly severe; they went beyond the decree.

Rav Wasserman highlights Ramban’s statement that a murderer fulfills God’s decree but is still guilty of a sin. This murderer took a life that was not his to take, and therefore must be punished. So too, he argues, someone who commits suicide fulfills God’s decree that he will die but is still guilty of a heinous crime. Suicide is murder, the unlawful taking of a life that is not his to take. Ironically and tragically, someone who commits suicide would have had his desire fulfilled in a non-sinful way, if only he had waited.

Rav Wasserman also quotes Rabbeinu Bachya Ibn Pakuda (Chovos Ha-Levavos, Bitachon, ch. 4) who specifically says that one who commits suicide, like other murderers, is guilty of a terrible sin even though the death is pre-ordained by God. He means that someone who is judged as deserving death in the upcoming year will die, one way or another. Therefore, someone who commits suicide is fulfilling God’s decree foolishly and sinfully – he will die anyway but now he will also be guilty for the murder. (Of course, we are setting aside the issue of mental illness. God’s judgment of sins committed due to mental illness is presumably compassionate and overflowing.)

The question remains what the Ba’alei Ha-Tosafos were thinking. How can someone defy God’s decree of life on Rosh Hashanah?

A possible answer for Tosafos lies in a philosophical interpretation of a verse in 1 Samuel. Rav Sa’adiah Gaon (Emunos Ve-Dei’os 6:6) explains the widely accepted view among Medieval philosophers that a person’s lifespan is predetermined at birth but can vary for various reasons. Specifically, God will extend one’s life as a reward and shorten it as a punishment. Sometimes, someone righteous dies at a relatively young age that was actually later than he would have otherwise lived; his predetermined lifespan was actually extended. And someone wicked may die at a relatively old age that is younger than he would have otherwise lived.

Rav Yehudah Ha-Levi (Kuzari 5:20) uses this to explain 1 Samuel 26:10, which reads: “David said, ‘As God lives, God will strike him with illness, or his day will come and he will die, or he will go forth into battle and perish.” Kuzari sees three types of deaths discussed in this verse: 1) Miraculous death, unscheduled and caused by divine intervention, 2) Natural death, at a person’s set time and 3) Accidental death, caused by happenstance such as war. Kuzari adds another type: 4) Chosen death, suicide, which is not mentioned by the text because no sane person would choose it. Yet, Kuzari implies, a person can choose to die even when not divinely ordained. This is similar to Tosafos’ approach. Kuzari does not explain how his four-pronged theory of death relates to the divine decree on Rosh Hashanah.

Rashbash (Rav Shlomo Ben Shimon Duran, Responsa Rashbash, no. 195) takes up this task. He was asked whether a person should flee a city suffering from a plague. If one’s fate is sealed on Rosh Hashanah, why bother running? If you are destined to live, you will no matter what you do. In a responsum quoted by later authorities mentioned above, Rashbash offers a three-pronged theory of the Rosh Hashanah decree.

Some people receive a decree on Rosh Hashanah for life, and will survive any situation. Others are judged for death and will meet their fate, one way or another. These two types fall under the Kuzari‘s first and second types of death. However, some receive no decree for the year. These people are subject to the third and fourth types of death. Absent proper care, they may die. Or they may survive and even thrive.

This third type, the people who receive no decree about this-worldly life or death, must flee a plague-infested city. As opposed to those in the first two types, these people may be killed or even kill themselves. Since we do not know in which category we fall, we must be careful and act as if we are in the third. Similarly, the Torah (Deut. 20:5) exempts a groom from military service lest he be killed in battle. If his death is pre-ordained, he has no reason for concern. But if he is among this third type, he may die in battle despite his lack of such a decree.

What happens on Rosh Hashanah? According to Ramban and Chovos Ha-Levavos whom Rav Wasserman quote, everyone’s year is determined on Rosh Hashanah. On that day, God decides who will live and who will die over the upcoming year. It is theologically impossible for someone decreed for life to die from an epidemic.

According to Rashbash, not everyone receives a judgment for life or death on Rosh Hashanah. For these people, death due to an epidemic is theologically possible, but we do not know who falls under this category. Therefore, we are required to take all appropriate precautions in a time of epidemic, including fleeing if that is a medically appropriate option. As stated above, we are only discussing the theory. In terms of practice, before making any practical decisions ask your rabbi who will incorporate the latest medical guidelines into his calculations.