As with Parashat Va-Yehi, Beshalah is dominated by a poetic passage (the Shira, the Song the Jews sang after passing through the Sea on dry land), and I had to work to take examples from other parts of the parsha.

My first come from the run-up to and immediate follow up of the incident. In 14;15, Hashem says to Moshe, before the sea splits, mah titz’ak elai, why are you calling out to Me? (News to us, because the verse had not told us yet Moshe was praying). Rashi reads Hashem to be saying this is not the time for prayer, it’s the time for action (to wave his staff over the Sea and split it).

Onkelos says kabelit tzelotakh, I have accepted your prayer, telling ArtScroll he read it to be Hashem’s way of telling Moshe he can stop, there’s no longer any need for him to pray. Perhaps, but I am more interested in Onkelos’ switching Hashem’s question—rhetorical, admonishing, or otherwise—into a statement. The verse seems to have Hashem asking Moshe why he is calling out, where Onkelos casts it as Hashem informing Moshe his prayers have been accepted.

It also reminds us of how hard even those people found it to concede Moshe had a more direct line, a clearer picture, of Hashem’s Will, despite their having seen him bring all the plagues on the Egyptians. To yield to someone else’s greater knowledge of the divine, I think Onkelos reminds us, is enormously difficult for most of us.

The two together show us Moshe as someone of great prophecy, whose prayers were already being accepted by Hashem in ways leading to remarkable miracles.

The Torah introduces the Song after the Sea with the words az yashir Moshe uvne Yisrael, 15;1, then Moshe and the Jewish people sang. Onkelos writes be-khen shabah Moshe, using a verb I would have read as praise, telling us this wasn’t an ordinary song, it was a song of praise. ArtScroll disagrees, thinks ve-shabah in Aramaic can just mean sang, and I never trust my sense of translation.

In this case, the verse still bears notice, because the first words of the Song itself are “ashira la-Shem, I will sing to Gd.” Had Onkelos written only neshabah, it could have been literal, shabah used as a verb for sing. He does write ve-shabah, then adds ve-node, and we will give thanks. ArtScroll has a few explanations, none fully satisfying to me– Lehem veSimlah says he writes it because the Song has praise and thanks, leaving unexplained why Onkelos would insert the information where the people reciting the Song did not; Marpei Lashon and others argue thanks  and salvation must be part of every shira; if they are right, however, Onkelos would not need to have said it. More, in 15;21, when Miriam calls to the women shiru laShem, sing to Gd, Onkelos again writes shabahu ve-odu, sing and thank.

To me, it’s more likely Onkelos thought shira could come in many forms, the word had many meanings, depending on the song about to be sung. This shira had both praise and thanks, other shirot (ones not responding to a particular incident of salvation, for example) might not. A call to shira, then, has no specific meaning until we know the context, refers to all versions of song. Here, the verb means sing and thank, where in other places it might mean something else.

Hashem’s Glory and the Temple

The Jews at the Sea “saw” Hashem more explicitly than even lofty prophetic visions, Hazal assumed, outdone only by the experience at Sinai. I mention it because Onkelos inserted the Temple where Rashi did not. When the Jews say zeh Keli ve-anvehu, 15;2, Rashi understands it as tradition did, this is my Gd, and I will beautify him (such as by performing mitzvot in the most beautiful way possible).

Onkelos instead writes ve-evnei le Mikdesha, I will build Him a Temple, and then takes the next word, va-aromemenhu, for Rashi a way of saying I will sing to Him, as aflah kodamohi, I will bow (or serve) before Him, in the Mikdash. It’s not exactly non-literal as Rashi (who quotes Onkelos as well as giving his own reading) relates it to naveh, a place of dwelling. Onkelos can read ve-anvehu as I will make a naveh for Him, I will en-sanctuary Him, as it were.

But why? What led Onkelos to think the Jews were already imagining a Mikdash? I think part of the answer might lie in 15;17, where the Song speaks of Hashem bringing the Jews to their land, planting them there, and of Hashem fashioning a Mikdash, a Temple. Knowing the Temple was already on their minds (and, perhaps, resistant to the idea of “beautifying” Hashem), Onkelos saw ve-anvehu as about that as well.

It pushes the question back a step, leads us to ask why it was already an issue to discuss, to put in song. I wonder whether Onkelos here anticipates Ramban’s idea of the Mishkan and eventually Mikdash as a way to a continuing Presence similar to the one at Sinai. Perhaps Onkelos shows us every remarkable experience of Divine Revelation leads people to want to formalize it, make it permanent. It would be especially true at Sinai, but was already true here—“seeing” Hashem leads Jews to want to institutionalize the experience, to make it a regular part of Jews’ world.

How Long is Eternity?

My own guess—ArtScroll does not say anything—depends on the fact that alam also means world. Both in Tanakh and in Aramaic, the word can refer to forever as well, but it means world (if something lasts the whole world, it lasts forever). I wonder therefore whether Onkelos thought le-olam va-‘ed in the Torah means forever in all worlds (including the Messianic era and World to Come). Forever, loosely, means for all time; forever, for Onkelos, includes all of the Jewish idea of history, this existence only the lead-in to another one, where Hashem will also rule.

Moshe’s Hands at the First Battle with Amalek

At the end of the parsha, Amalek attacks the Jews, and the Jews return the favor. At that second war, they succeed when Moshe’s hands are raised, are defeated when his hands drop. Seeing this, Aharon and Hur support Moshe’s hands, and 17;12 tells us va-yehi Yadav emuna, his hands stayed steady (supporting the Jewish victory) until evening.

Rashi reads the word emuna, faithfully, as a description of the attitude Moshe brought to lifting his hands. ArtScroll also tells us of another view, Ramban and Radak, who said emuna means the hands were themselves faithful, stuck to their job.

Onkelos instead writes perisan bi-tzelo, spread out in prayer, where he has a good Aramaic verb for emunah, such as va-ya’aminu ba-Shem, they believed in Hashem, in the verse we saw earlier, 14;31. He switches here, I suggest, to show the role of spreading hands in prayer, as an expression of faith. The reaction to trouble, to need, for a person of faith, is to turn to Hashem. Moshe’s hands “were faith(ful),” the verse tells us, meaning his hands showed his faith, in that he knew the response to worrisome uncertainty was prayer.

For Beshalah, Onkelos showed me a world where Moshe is shown to be a person of faith, a prophet in whom the people finally believed, as they encounter Hashem at the Sea, sing in thanks and praise, and hope to always have such a Presence with them, in the physical structure of a Bet HaMikdash, for all versions of eternity. 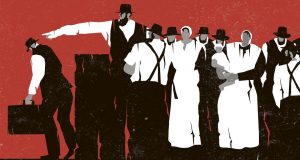 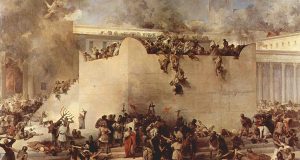