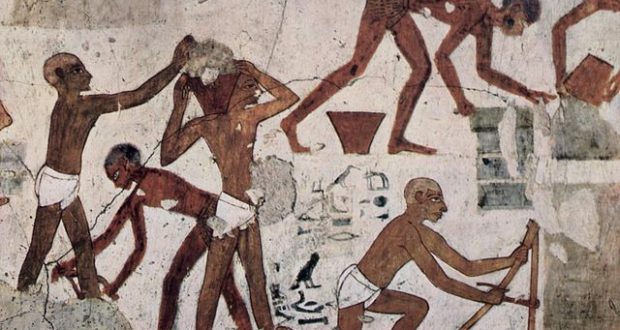 Sometimes we struggle to understand specific laws or passages that do not seem to fit into the Torah’s overall picture of harmony, community and connection with God. One such issue is that of slavery, which the Torah permits and legislates. The moral approach that seems most true to me, most consistent with Torah and history, is articulated strongly in a commentary to the story of Yosef in Egypt.

I. Yosef and the Slavery of Egypt

The Torah describes the effect on Egyptians of the famine predicted in Pharaoh’s dream. Yosef collected all the money and livestock in Egypt as payment for food (Gen. 47:14, 17). The next year, Egyptians offered to pay with their land and with themselves as slaves to Pharaoh in exchange for food (v. 19). Yosef buys the land (v. 20) and transfers the population to different cities across Egypt (v. 21). Yosef then says, “Behold, I have bought you and your farmland today for Pharaoh” (v. 23).

Ostensibly, Yosef led the effort to enslave the Egyptian people to Pharaoh. Some Bible scholars note that anti-Semites have used this passage to criticize Jews. Citing Von Rad and Gunkel, Reform rabbi Gunther Plaut writes: “This section has been made a show piece of anti-Semitic polemic.’” (The Torah: A Modern Commentary, p. 298). Aside from the ridiculousness of accusing contemporary Jews of something done thousands of years ago, the claim isn’t accurate for two reasons.

Rav Meir Simcha Hacohen (Meshekh Chokhmah, Gen. 47:19) reads the passage slightly differently. Saying that Yosef “greatly hated slavery, one person serving as a master to another,” he takes the word translated above as “behold” literally, meaning “today” (ha-yom). The people were acquired as day workers, earning their daily bread through working in the fields that Pharaoh bought.

However, most non-Orthodox commentators accept a different version of the text. The Masoretic Text (traditional Jewish Torah) says (Gen. 47:21) that Yosef transferred people to cities (“ve-es ha-am he’evir oso le-arim”). Rashi and others explain that this was due to the influx of immigrants caused by the famine, including Yosef’s brothers. In order to set all residents as equals, he turned everyone into an immigrant by moving population. Rashbam and others see this move as connected to the sale of the land. If people remained on the land they had sold to Pharaoh, they would have continued treating it as their own, making it almost impossible for Pharaoh to lay claim to the land.

However, the Samaritan Torah and the Septuagint have the verse as saying that Yosef enslaved the people, by changing two letters and adding a third: “ve-es ha-am he’eviD oso la-aVaDim.” Rav Menachem Kasher (Torah Shelemah, Gen. 47 n. 54) explains that the ancient scribes of the Samaritans and Greeks misunderstood the passage and changed the text to fit their interpretation. According to the alternate text, a scribe changed the “original” text about enslaving the population to what we have in the Masoretic Text about moving people to cities, without changing Yosef’s statement two verses later. It isn’t clear to me why any scribe would change the text this way (removing the enslavement), making it more difficult to read and more complex and nuanced to interpret, and slightly inconsistent with a nearby verse. I think it’s more likely that a scribe would change it to make the text smoother, reducing the complexity of the passage, meaning the Samaritan and/or Septuagint scribes changed the text. Be that as it may, most non-Orthodox scholars see Yosef as the enslaver of Egypt. Which offers us the opportunity to discuss the morality of slavery.

The Torah’s allowance for slavery is hard to understand. If every person is a descendant of Adam, who was created alone to teach us that each person is a world unto himself (based on Mishnah, Sanhedrin 37a), then how can the Torah allow for one person to own another? It’s denigrating, dehumanizing, scandalous.

Rav Nachum Rabinovich (Mesilos Bi-Lvavam, pp. 38-45) explains that slavery was an economic reality of the ancient world. The Torah came to move people away from it by placing regulations and limitations on it. God could not expect people to move from one extreme to another, from life with slavery to life without it. Instead, He reduced the allure of slavery, placing obligations on the slave owner and encouraging him to see the humanity in his slaves.

Rav Rabinovich’s great student, Rabbi Lord Jonathan Sacks (Covenant & Conversation: Leviticus, pp. 367-373), argues similarly. Rabbi Sacks writes (p. 370): “Everything dehumanising about slavery was forbidden. Yet slavery itself was not banned. Why not? If it was wrong, it should have been annulled. Why did the Torah allow a fundamentally flawed institution to continue?”

Rabbi Sacks invokes Rambam (Moreh Nevukhim 3:32) who says that the Torah tried to wean us away from idolatry and other offensive religious practices rather than forbidding it outright. Rabbi Sacks adds (p. 371): “God wanted mankind to abolish slavery, but by its own choice, in its own time.”

While this approach is attractive, in explaining details of the law and seeing a historical progression, another explanation is simpler and, I believe, historically accurate.

”Memories of the African slave trade color our view of slavery, so that we cannot understand this expression of gratitude. But in ancient society slavery was the accepted way of bailing out the destitute, and under a benevolent master could be quite a comfortable status (cf. Joseph with Potiphar). Indeed, the law envisages some temporary slaves electing to become permanent slaves rather than take the freedom to which they were entitled after six years of service. Ancient slavery at its best was like tenured employment, whereas the free man was more like someone who is self-employed. The latter may be freer, but he faces more risks (cf. Exodus 21:5-6; Deut. 15:12-17).”

Today, we rightly object to slavery because we saw how it became abused when turned on “others” who were kidnapped by ruthless traders and transported across continents into miserable lives of servitude. However, applying our judgment to ancient times is anachronistic. In the ancient world, with very different economic conditions, slavery was not inherently bad. Bad masters were bad people who made slaves miserable. Good masters were good employers, providing food and board for an honest day’s work. A free person who did not own land lived a precarious existence while a slave, under a good master, enjoyed security.

After humanity’s experience with the evil of slavery, and with the technological advances that allow for different economic structures, we no longer see any positive use for slavery. We now have safety nets, well organized charities and powerful central governments that can care (to some degree) for the impoverished. Slavery today is evil. Applying that judgment to a different time and place constitutes ahistorical thinking.