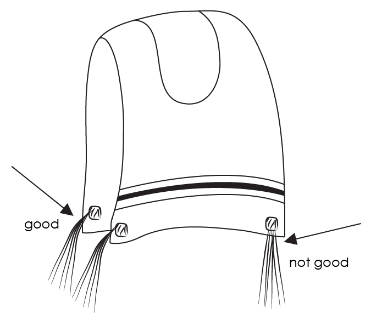 Where Should the Tzitzit Be Connected to the Tallit?

Question: I have learned that the tzitzit should be laying on the outside of the tallit, but I do not see that people are careful about it. How important is it for it to be done properly?

Answer: The gemara (Menachot 42a) cites Rav Giddel who learns from the pasuk’s words of “on the corners of their garments” that the tzitzit need to be resting (likely translation) on the corner of the garment, (as opposed to hanging down over only the ground – see illustration).

This looks like a Torah law, which would ostensibly make it crucial. However, you are right that people are not careful about it, and this phenomenon is reported (without alarm) already by the Sha’arei Teshuva (Orach Chayim 11:26). This laxness could be horrible, but it could also be telling. Let us search for further indications.

There are other indications that not being careful about this does not ruin the mitzva. The Darchei Moshe (OC 8:3) introduces the minhag not to make a beracha on a tallit katan (i.e., tzitzit) out of concern that it might be too small, but to make it on a tallit. If hanging from the incorrect side disqualifies, it might be more of a problem for a tallit (see below). Also, we are instructed to check that the strings of the tzitzit have not ripped before putting them on, so as not to make a beracha l’vatala (Shulchan Aruch, OC 8:9), whereas our issue, which is much more common, is not mentioned.

There are actually different explanations as to the gemara’s (ibid.) intention. Rabbeinu Gershom (ad loc.) and others explain it, that the knot should not be attached to the garment too close to the corner but further up and in. Indeed, the Shulchan Aruch (OC 11:15) introduces the halacha as you described it with “there are those who say…,” although he does pasken that way, as he does not cite dissenters. The Sha’arei Teshuva (ibid.) suggests that people are not careful about this because some of the Rishonim who raised the issue were not resolute about it.

Actually, the Levush (OC 11:15), Magen Avraham (11:24), and Mishna Berura (11:72) posit that even those who understand the gemara to be referring to our case, posit that it does not disqualify the tzitzit. The Tehilla L’David (OC 11:11) argues that the issue is only at the time that one ties the tzitzit to the garment. The Levush and Magen Avraham say that the bigger issue is to avoid having the knot attached right on the garment’s vertex because it looks like he is trying to have on “eight corners” or because this was the Karaites system.

For rectangular tzitzit, the place to put the knot is on the long side. On the square tallit, the matter is more complicated. While the back side hangs similarly to the strings of tzitzit, the front part is draped over the shoulder and chest, and initially wrapped over one’s head. It is likely, then, that it usually ends up resting on the corner when it is put on the side that is horizontal before putting it on. Assuming, as we do, that the issue has to do with the time of wearing, this is where most poskim recommend to have it (see Bi’ur Halacha to 11:15). Thus, it turns out that the proper position can actually change during a given wearing based on how the garment is positioned. Perhaps this is a reason that the poskim assumed that this could not be a problem that disqualifies the mitzva.