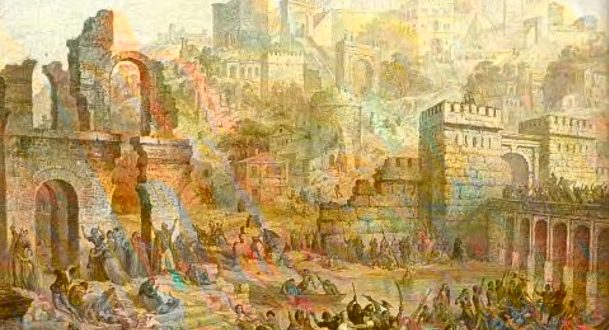 The Argument From Jewish History

For his fourth and final “rational approach to God’s existence,” Rav Lawrence Kelemen, in his Permission to Believe, utilizes the argument from Jewish history. In my opinion, this is the most convincing argument for God’s existence and the most powerful, because it applies not just to some vague all-powerful being but to the biblical God. On the other hand, while it is the strongest argument, it is the weakest proof because it is almost (if not completely) impossible to prove. It is also an argument I have not seen in classical Jewish texts (although Rambam, Moreh Nevukhim 2:25 states that miracles require not only a God, but a Creator).

The argument goes in two general directions. One focuses on the continued existence of the Jewish people after thousands of years. All the major nations have disappeared from history — Assyrians, Babylonians, Ancient Greeks, Romans, etc. Despite exile and repeated persecution throughout the years, Jews still remain as a nation. I will not belabor the point because it is so obvious and so frequently made. We are still here. How can that be, if not by divine providence? We will refine that argument shortly.

The second direction focuses on the oversized success and contributions to society of the Jewish people in general. Many individual Jews have amassed incredible wealth throughout history. And many individual Jews have contributed to society through discoveries, inventions, artistic advances and otherwise. I will not belabor this point because it has also been made frequently.

If anything occurs that contradicts the laws of nature, this proves that there is a force above nature. The challenge, though, is defining the laws of nature. These are not a given but something that scientists developed over time, based on theories that have been tested. Who says that the laws we have are complete? Maybe an exception will be discovered that accounts for the purported miracle you witnessed.

Additionally, the very existence of laws of nature is hard to prove philosophically. The fact that the same thing has happened every time we tested it in the past does not guarantee that it will happen in the future. Of course, we act in our lives as if nature is consistent and laws exist, but we can only prove that the laws of nature have been in effect during our observation period, not before or after.

Even if we assume that laws of nature exist and will not change, how do we know that event A contradicts those laws? Let’s say someone performs a card trick that we cannot explain. Do we assume that the card trick is a miracle that proves God’s existence? No, we recognize that an explanation exists for the trick but we do not yet know that explanation. That same attitude can apply to even more puzzling events. We make a mistake if we use our ignorance as proof for God’s existence.

All of the above addresses the difficulty of proving line 1 of the argument. Line 3 might be wrong also. We may be mistaken that event A actually occurred. Different types of evidence can be used to determine that an event happened in the past, whether memory, testimony or records. How reliable are they? Even if you witnessed the event yourself, you may have seen what happened from a perspective that did not afford a complete view. You may have misunderstood what you saw or are seeing right now. It is, in fact, difficult to prove conclusively that anything specific ever happened.

III. The Miracle of Jewish History

Going back to Jewish history, many theories have been offered for the persistence and success of the Jewish people. For example, we have a culture that prizes education. Additionally, we take our persecution as motivation for continuity and hard work. I find none of these theories particularly convincing. Someone who does not believe in God will feel compelled to attribute the Jewish story to some sociological or biological reason but personally I find the question stronger than any of the answers. To me, it seems like a clear miracle that the laws of nature cannot explain. But even if the answer has not yet been found, maybe a better explanation will be found at a later time that shows that Jewish existence and success conforms to the laws of nature.

Additionally, the laws of nature regarding national disappearance aren’t clear. We can see that all other nations have disappeared but how do we know that they must? Perhaps Jewish survival is just an unlikely outcome that happened. There might be other examples of comparable small, persecuted communities surviving for centuries, such as Armenians. They survived so perhaps long term national survival is unlikely but possible within the laws of nature. However, no other nation shows the same success rate as the Jewish people.

Put differently, in order to conclusively prove God’s existence, this argument must demonstrate that Jewish survival is impossible by ruling out all alternative theories of Jewish survival. Doing so is impossible because new, creative theories can be generated. Therefore, this line of thinking can never conclusively prove God’s existence through the miracle of Jewish existence and success.

On the other hand, from a purely subjective perspective, people can decide for themselves whether the laws of nature can explain this phenomenon and whether it seems likely that a comprehensive natural explanation will be found. Jewish survival is self-evident. Many great thinkers have marveled over the Jewish story and failed to find an explanation that satisfied them.

Not only does this mystery strongly point to a God that preserves and guides the Jewish people, it points to a specifically Jewish idea of God. The biblical concept of a chosen nation, that stubbornly persists millennia after the Bible’s writing, serves as an argument to the existence and continued activity of the God of the Bible.