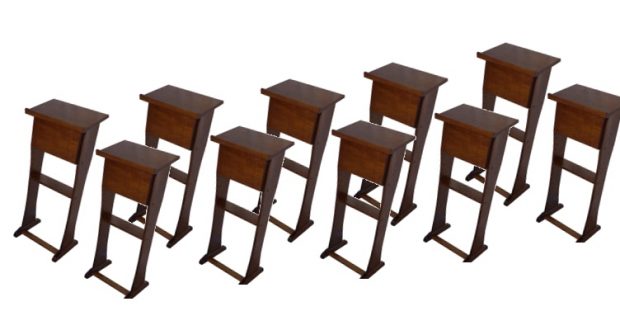 For almost four and a half years, R. Gil Student and you readers have allowed me to pursue what started out as a lark, finding a responsum written on every possible day of the Jewish calendar. This responsum marks the last one I will summarize in this forum (I have summarized them all in audio shiurim at the OU website, and written summaries are at my yeshiva.academia.edu website); I am in the late stages of a first draft of the book these responsa have led me to, and there are few enough left for me to try to ferret out which ones I have not yet shared here.

After Sukkot, I hope to embark on a new project on Onkelos’ translation of the Torah. Meanwhile, I wanted to pause and thank my host, R. Student, and all of you for reading, reaching out (grothst is my gmail address), and allowing me to think out loud as I got to know great rabbinic figures of our past, and came to understand the process of halakhic ruling better than I had. Thank you.

3 Tishrei: Tzitz Eliezer on Joining Kedushah While in the Midst of One’s Own Tefillah

Tzitz Eliezer 12;49, dated Tzom Gedalya 5735 (1974) responds to an unnamed Torah scholar on an issue particularly relevant to the Yamim Noraim, the High Holidays, when we extend the third berakha of the Amida (we add paragraphs, starting with u-ve-khen ten pahdekha, And so instill Your awe among all the nations).

That extension makes possible a situation unlikely to arise the rest of the year, an individual might be still reciting the third berakha of the Amida when the hazzan reaches kedusha [usually, the berakhah’s so short it’s not really an issue. Particularly on the High Holidays, when some people also pay more attention to their prayers, it’s imaginable a man would be reciting these paragraphs when the hazzan reaches kedusha. Although it does mean this man took a really long time for his private prayer, since the hazzan’s repetition includes piyyutim, liturgical poems, extending the time until he reaches kedusha].

The first aspect of the question to remember is halakha’s comfort with an individual answering to kedusha despite being in the middle of his/her private prayers, as long as s/he is within the first three berakhot of the Amida—the person joins the hazzan in reciting the berakhot, then says kedusha with the community. Here, though, the individual is past the kedusha point, but still within the same berakhah.

The questioner had looked a bit, but had not found anyone who dealt with this.

Tzitz Eliezer says a long search led him to a comment in a sefer called Me’orer Yesheinim (The Awakener of the Sleeping). That author allowed joining the communal kedusha even if the person was already about to recite the berakhah of Ha-Melekh HaKadosh. Tzit Eliezer agreed at first, then had second thoughts.

He reminds us the practice of joining kedusha while still in one’s private Amida isn’t found in the Gemara, it was an innovation of R. Hai Gaon’s, cited by Rif, Rambam, and Shulhan Arukh (Orah Hayyim 109). As a post-Talmudic source, Tzitz Eliezer thinks it is limited to what it says, cannot be a basis for extrapolation.  (We could apply a principle of the Gemara’s to reasonably similar cases. A new Geonic idea, without clear sourcing, teaches us only what it teaches us.)

Rashba in responsum 1;158 laid the groundwork for this approach with his explanation for why he held an individual who finds him/herself in the silent Amida cannot join if the community is up to the later kedusha de-sidra, the recitation of kedusha in the collection of verses of U-va le-Tziyyon. The questioner thought the fact of the words being the same as if the community were up to the regular keduash— kadosh, kadosh, kadosh—should allow it.

Rashba gives two reasons against. First, despite the words, he holds the two experiences of communally announcing Hashem’s kedusha differ. As interesting as the answer is, as allusive as it is about the roles of the different parts of davenen, of the liturgy, our question is about the kedusha in the same part of the prayers.

It’s Rashba’s second reason that helps Tzitz Eliezer. Rashba precedes Tzitz Eliezer in saying we cannot extend R. Hai Gaon’s idea further than R. Hai himself. His also understands R. Hai to have said his idea only when the individual is at the same place in the prayer as the hazzan and says it word for word with the hazzan. (Rashba’s ruling is codified in Orah Hayyim 109;3, where Shulhan Arukh rules out joining even the kedusha of Mussaf, the additional prayer, if the individual is really at Shaharit, the morning prayer; later in the responsum, Tzitz Eliezer quotes Meiri to make the same point about a person up to Ma’ariv joining the kedusha of a community saying Minha. Joining the kedusha of a different prayer is not allowed).

In the Rosh HaShanah case, the individual is at the end of that third berakha, where the hazzan is just finishing the second. To Tzitz Eliezer, the gap means the person does not meet Rashba’s standard of “being in the same place,” especially since, as we said, these paragraphs can take a long time to recite.

They’re also thematically distant. Kedusha is about declaring Hashem’s sanctity (or whatever the right translation is),  a theme we stress at the beginning and end of the berakha (during the Yamim Noraim, we end the berakha with a small paragraph that starts kadosh Ata, You are sanctified, to fulfill the requirement to return to the berakha’s main theme as we end it).

These added middle paragraphs, while they fit within the berakha (although Tzitz Eliezer feels the need to refer us to Kol Bo and Tur to see exactly how they’re related to Hashem’s sanctity), are not directly about it, giving another reason to say it’s an interruption for the individual to jump from there to kedusha. Tzitz Eliezer also dislikes the idea the person will say kedusha and then repeat the third berakha from the beginning, rendering futile the first go-around on those words [and halakha avoids a tefillat or birkhat shav, a futile prayer or blessing.

Returning to where s/he stopped is such a non-starter Tzitz Eliezer doesn’t discuss it, I think because there’s no time we interrupt a private Amida to join the community, and then return to where we were].

These issues are what led Rema to allow this strategy only where the individual cannot wait, answer, and then start his/her prayer. Leket Yosher restricted it further, prohibiting an individual from waiting for the community to catch up; if the individual reaches Mehaye HaMetim (the end of the second berakha, with kedusha to immediately follow) as the hazzan starts his repetition, Leket Yosher requires the individual to keep going.

All this shows how limited this strategy is, such that Tzitz Eliezer thinks it might only be where the individual can start exactly with the hazzan and recite the first part of the Amida word for word with him, how Rambam described the procedure.

Nearby Minyanim, Such as at the Kotel

The question arises even more frequently at the Kotel, where multiple minyanim abut, making it fully plausible an individual would be reaching Mehaye HaMetimjust as the minyan next to him gets there as well—should he answer their kedusha? Tzitz Eliezer says no, that’s not his prayer service, nor did he recite the first two blessings word for word with their hazzan. He notes Hessed Le-Avraham, an abbreviated Shulhan Arukh written by R. Eliezer Papu (the early 19th century rabbi of the Sephardic community of Silistra, a port city in northeast Bulgaria), raised this question and was uncertain about the answer.

Kaf HaHayyim ruled the individual could answer the other minyan’s kedusha, but Tzitz Eliezer was unconvinced. Kaf HaHayyim inferred his position from Shulhan Arukh, a text Hessed Le-Avraham knew as well, so if he was unsure, those were apparently not full proofs. [Although not necessarily—it could be Kaf HaHayyim thought of inferences Hessed Le-Avraham had not, but would have conceded had he heard them.]. For Yamim Noraim, Tzitz Eliezer was even more sure the individual could not join a nearby minyan when his own is going to get there soon.

The one circumstance where he agrees is if the individual in fact started with the neighboring hazzan, said the Amida word for word, and then—by force of habit—started the third beracha (ata kadosh) rather than going into kedusha. There, Tzitz Eliezer allows him to go back, say kedusha with the minyan, then repeat ata kadosh.

This is an example of a ruling I’m not sure is the general consensus. But our role in this series has been to learn from great poskim, great halakhic authorities, whether or not the particular view becomes the mainstream view. Here, Tzitz Eliezer was confident R. Hai Gaon’s idea the individual could join the community was only where s/he joined from the start, and could not be expanded.