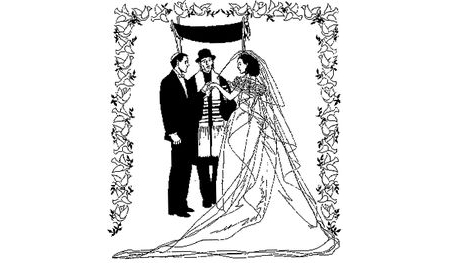 As a general rule, a mourner is forbidden to attend any celebration, especially one that includes a festive meal. This is especially true for a wedding. [1]YD 391:2. However, attending a wedding is subject to a different set of regulations than those of other celebrations due to the sensitivity of one’s presence or absence at such an event. For example, a mourner is often permitted to attend a wedding, subject to several restrictions, if his absence would cause the bride and groom great distress. [2]Aruch Hashulchan, YD 391:5. Somewhat related to this is the idea that a mourner is often permitted to attend a festive or celebratory event on Shabbat, if his absence would be noticeable. Such a situation may be considered a public display of mourning, something which is forbidden on Shabbat. [3]She’ilat Ya’avetz 2:180; Pitchei Teshuvah, YD 391:4; Igrot Moshe, YD 3:161. See also Shach, YD 393:7; Shemirat Shabbat K’hilchata 65:66. Examples of such events include a brit, sheva brachot, or even a communal seudat shlishit. This is especially true for a mourner who is a relative of the one hosting the event. [4]Igrot Moshe, YD 3:161. Some authorities do not accept this differentiation between Shabbat and weekdays, and forbid a mourner to attend such events, even on Shabbat. [5]Pitchei Teshuvah, YD 391:2,4; Igrot Moshe, YD 3:161.

There is a well-known dispensation that allows a mourner to attend a wedding if the mourner “works” at the wedding in some professional manner. For example, the mourner can work as a waiter or in some other official capacity. It is customary for parents to rely on this leniency — even during shiva — to attend the wedding of a child. All other relatives, however, should only rely on this leniency after the shiva period. [6]Rema, YD 391:3; Aruch Hashulchan, YD 391:13. In order to properly comply with this leniency, the mourner must serve as a waiter for the entire evening, and not merely serve one or two token portions. Additionally, the mourner should not eat his meal in the company of the other guests and he should not actively join in the celebration. [7]Nitei Gavriel 16:9. Many authorities rule that only relatives of the bride or groom may use the “waiter leniency” in order to attend a wedding, but not friends or acquaintances. [8]Gesher Hachaim 21:8:11. There are those who rule that parents and grandparents may attend a wedding and participate as normal without the need to resort to the “waiter leniency.” [9]Aruch Hashulchan, YD 391:10; Igrot Moshe, YD 2:171; Nitei Gavriel 16:5.

On the other hand, some authorities forbid mourners to even attend a chuppa ceremony. Common custom, however, is to allow mourners to do so, especially when the chuppa is in a different location from where the wedding festivities will be taking place. [10]YD 391:3; Aruch Hashulchan, YD 391:12; Shevet Halevi 1:213; Avnei Derech 2:53. Y.D. 391:3. See Aruch ha-Shulchan 12. As mentioned, there are additional grounds for leniency to allow parents, grandparents, and siblings to attend the wedding and certainly the chuppa ceremony. According to the view that parents may attend a child’s wedding even during shiva, the parents should not sit at the head table and they should limit their exposure. [11]Aruch Hashulchan, YD 391:10; Igrot Moshe, YD 2:171; OC 4:40:16. Some authorities rule that a mourner may attend any chuppa ceremony after shloshim. [12]Rema, YD 391:3.

A rabbi in mourning may officiate at a wedding after the conclusion of shiva for a relative who passed away. [13]Nitei Gavriel 19:1. Those who are permitted to attend a wedding are also permitted to hear the music that is played there and need not make heroic efforts to avoid hearing it. [14]Maharam Shik, YD 368; Har Tzvi, OC 1:121. Those whose livelihoods depend on weddings, such as musicians or photographers, may work at weddings after shloshim. [15]Kol Bo p. 360; Gesher Hachaim 21:8:3; Pnei Baruch p. 227 note 73. Some authorities allow a mourner to attend the wedding of two divorcées who remarry each other as such an event is not considered to be as joyful as a first-time marriage. [16]Nitei Gavriel 16:4.

According to most authorities, a mourner is permitted to make an appearance at a wedding in order to wish the bride, groom, and family members mazal tov but should endeavor to do so when there is a recess from the music and dancing. [17]Nitei Gavriel 16:3. Rav Moshe Feinstein permits a woman in mourning to join her husband at a wedding that he was invited to if marital or family friction would ensue if she didn’t. [18]Igrot Moshe, YD 2:169. One need not impose any of these mourning restrictions upon children under the age of bar or bat mitzva. [19]Nitei Gavriel 16:21. A mourner is permitted to attend a brit or pidyon haben, and the like, but must leave before the festive meal begins. [20]Gesher Hachaim 21:8.

In the unfortunate event that a bride or groom becomes a mourner within a week before their wedding, the wedding may not take place as scheduled. [21]YD 392:3. But see Pitchei Teshuva, YD 392:10. In such a situation, the wedding must be delayed until after shloshim, [22]YD 392:1; Chochmat Adam 166:4; Kitzur Shulchan Aruch 213:1. though some authorities allow holding the wedding after Shiva. [23]Ibid. Shulchan Aruch Harav, OC 493:3; Chatam Sofer YD 351; Chavalim Bane’imim 10; Yabia Omer 5:31. It is permissible, in certain circumstances, to withhold the news from a bride and groom that a relative has died until after the week of sheva brachot. [24]Nitei Gavriel 16:27.