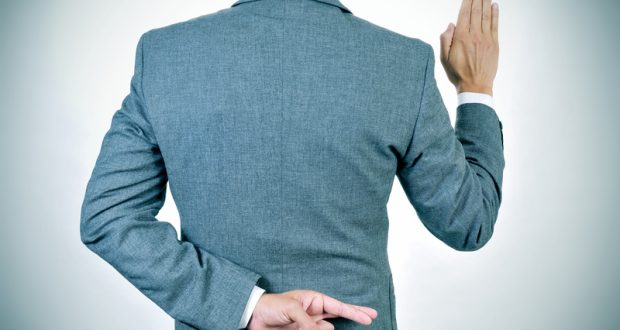 We Can’t Lie Under Oath

Jewish law includes loopholes, some of which might seem to allow Jews to interact with non-Jews in ways we ordinarily think of as unethical, especially if the Jews convince themselves the non-Jews in question count as idolaters. As important and sometimes forgotten counterbalance, Jewish law and thought also obligates a Jew to foster good working relationships with the non-Jews around them, including idolaters, certainly when the Jews are in exile, guests in others’ land, subject to and dependent on the goodwill of the government of the country hosting them.

The two sides to proper conduct towards non-Jews readies us for Shu”t Noda Bi-Yehuda Mahadura Kamma Yoreh De’ah 71, dated 13 Av 5525 (1765). A local ruler wanted to know whether the validity of the Torah scroll a Jew holds while taking an oath affects his right to lie. The non-Jews in Nodah Bi-Yehuda’s area suspected Jews were taking scrolls they knew to be technically invalid as an excuse to lie, not having sworn on a valid scroll.

Biblical Proofs We May Not Lie Under Oath

Noda Bi-Yehudah corrects a first misimpression (of the non-Jews’, and maybe of the Jews as well): the Torah scroll is not what obligates a Jew to tell the truth under oath. He tells his non-Jewish questioner the prohibition against swearing falsely comes immediately with the words “I swear…” Whatever follows, a promise to act in a certain way or refrain from acting, an assertion about how s/he did or did not act in the past, the words “I swear” require truth-telling.

R. Landau brings proofs, starting with the Aseret Ha-Dibberot, the Ten Sayings [I used to write Pronouncements, but that’s a long word; a student recently suggested Sayings, good enough]. The third of the Dibberot prohibits taking Hashem’s Name la-shav, in vain, without any mention of a Torah scroll as a condition. Nor do any of the other Biblical verses about oaths, as he is about to show. I am going to review those further verses because, first, many of us unfortunately need a reminder of how seriously the Torah insisted on swearing only truthfully. Second, his piling on examples shows his Christian questioner’s suspicions would not have been sufficiently assuaged by just the fact the  Aseret Ha-Dibberot requires Jews not to lie under oath.

Vayikra 5;4 uses the phrase le-vatei vi-sefatayim, to express with one’s lips, for taking on oath, focusing on the spoken word; Vayikra 19;12 calls a false oath itself a chillul Hashem, a sacrilege of the Name. In both cases, the verbal utterance alone creates the oath, Torah scroll not required.

Bamidbar 5 lists many pieces to the sotah ceremony, where the priest administers an oath to the woman suspected of adultery, the kohen taking earth from the Mishkan grounds, water from the laver, and her bringing a barley flour offering. No Torah scroll, evidence it has no necessary role in putting an oath in force.

Bamidbar 30;3 prohibits violating one’s promises, obligating the Jew to do all s/he vowed.

Throughout Tanach, Before and After the Torah Was Given

Prior to matan Torah, the Giving of the Torah, people take oaths, with all parties to the event expecting the oath would be kept. Avraham and Avimelech swear to a peace treaty (as does Yitzchak with another Avimelech in the next generation); Ya’akov extracts an oath from Esav when the latter was selling his rights as first-born; as Ya’akov left Lavan’s house, the two swore not to pass a pile of stones other than for peaceful purposes, and Ya’akov swears in the Name of the One his father Yitzchak feared; Yosef has his brothers swear to return his bones to Israel when Hashem redeems them from Egypt. [Theoretically, Noda Bi-Yehuda is cheating a bit, as some other Jew might argue the rules changed when the Torah was given.]

The rest of Scripture includes stories of oaths understood to obligate the oath-taker regardless of the absence of a Torah scroll. In Yericho, the spies swear to Rachav they will save her and her family. R. Landau feels the need to point out they were undercover in a non-Jewish city, proving they had no Torah present or available. Later, he similarly notes Boaz swore to Rut to take care of marrying her when they were out at the harvest area, where no scroll would have been, and David and Yonatan swore to each other while making sure no one knew they had met.

In each case, all parties assumed the oath obligated them fully. As clearest proof, after Yericho is conquered, Yehoshu’a tells the spies to fulfill their oath, showing he (as the representative of the Jewish people) took this oath to be obligatory.

The Pact with the Giv’onim

Yehoshu’a 9 tells the story of the Giv’onim, Canaanites who tricked Yehoshu’a and the other leaders into swearing a pact with them, thinking they were far from away.  The pact violated the requirement to kill all the residents of the Land, Devarim 20;16. Although they had taken the oath under false pretenses and despite the anger of the populace with their leaders’ misstep, the Jews kept to the pact. The power of an oath. [R. Landau does not take up what seems to me the thornier question of why they felt obligated by an oath where they were misled].

R. Landau thinks the Jews’ failure to consult with El’azar the High Priest means they also did not hold a Torah scroll. (Yehoshu’a 9;14 says they did not ask Hashem about the peace treaty, and R. Landau assumes they would not have bothered to hold a Torah scroll if they did not care to include Hashem’s opinion. I am not convinced the same would be true today. I believe we can easily imagine Orthodox Jews acting as they were sure halachah required—including holding a Torah scroll, if they thought it part of some ceremony– without asking an halachic authority).

Having presented Scriptural sources at length (I assume because his non-Jewish questioner knew those sources as well, making the argument ring truer), he now offers halachic sources, to confirm his perspective is normative among Jews. Rambam, Laws of Oaths, lists four types of oaths a Jew must fulfill if s/he takes them, none of them including a scroll as necessary to the oath’s obligatory power.

Yoreh De’ah 210;2 records a dispute about an oath taken in a dream. Rashba thought Jews must fulfill any oath they see themselves take in a dream, where Rosh limited the obligation to uphold one’s oaths to those uttered verbally, with full intentional assent. Again, no one brings up Torah scrolls as a possibly necessary part of the ceremony.

Where people do hold a scroll to heighten the seriousness of the oath, R. Landau notes Rema to Yoreh De’ah 237;6 says anything written in ketav Ashurit, the script used for Torah scrolls, has the same effect, chochmah chitzonit, secular writing, included. Shach there tells us Maharam Mintz thought placing one’s hand on the item counted as holding it [perhaps a precursor of US courts’ asking witnesses to place one’s hand on a Bible while taking an oath].

Kinds of Oaths Where a Torah Is Held

Jews sometimes require holding a Torah to impress the seriousness of the oath upon the person taking it, says Noda Bi-Yehudah, not because it has any effect on the oath itself. Nor do Jewish courts act this way for all oaths, such as shevu’at heiset, instituted rabbinically for when one Jew completely denies a claim. Torah law accepted a full denial in the absence of evidence on the claimant’s side. Yet were we to find out the defendant lied, he would incur the same reaction as one who swore a “more serious” oath falsely, as laid out in Choshen Mishpat 34;5.

Furthermore, while Choshen Mishpat 87;15 only begrudgingly accepts holding an item other than a Torah, Rema allows any item on which Hashem’s Name is written, and says a Torah scholar can hold tefillin as a first choice. Shach expands the idea to anyone who wears tefillin every day. Already by Noda Bi-Yehudah’s time, just about every ordinary Jew did so, turning holding tefillin while taking an oath into a generally acceptable option.

Noda Bi-Yehudah has argued a) Jews have no right to make false oaths, regardless of what item the Jew is or is not holding, and b) those who hold items need not hold an actual Torah scroll to have the same effect. His next refutation of the original worry shows a technical invalidation of a Torah scroll does not diminish its ability to serve its function for someone taking an oath.

A Torah scroll with a problem (a word rubbed out, for example) is fixed and returned to use, without needing any ceremony to return its supposedly lost sanctity. Apparently, Noda Bi-Yehudah says, it held its original kedushah throughout its invalidation and repair.

Besides, halachah tells us we can violate Shabbat (at a rabbinic level) to save a Torah scroll from a fire as long as eighty-five letters are left properly written [for reasons he does not elaborate here; see Shulchan Aruch Orach Chayyim 334;12], which the kinds of scrolls under discussion certainly have.

In fact, each of the five books of the Torah has sufficient sanctity for the purposes of oaths. We do not read from them in public for reasons of communal honor, but the sanctity of any one section suffices. Our scrolls have all five, making it most likely one of the books of the Torah has no problems in it. When we say a Torah scroll is invalid, we mean in terms of reading from said scroll in public (he in fact thinks that if we encounter an error, we do not need to take another Torah out right then, and also thinks we put it aside only to be sure the owners fix it, not because it’s unusable); in terms of its hold over our truth-telling in oaths, nothing has changed.

Towards the end of the responsum, he says he’s gone through much of this material only to accede to the request of the honored personages who posed the question. Fundamentally, he thinks each of the sources he’s cited prove his point; taken together, each independent of the other, they make clear a Jew may not fool him/herself as to the permissibility of lying under oath, with or without a Torah, valid or not.