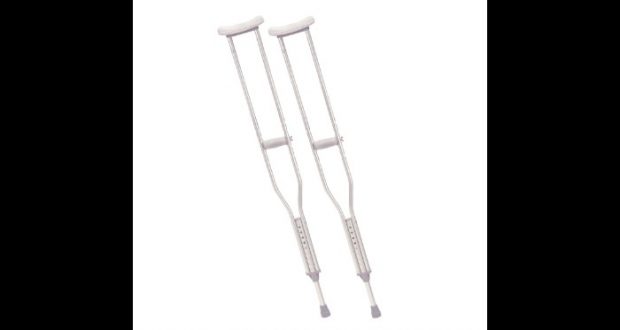 Using Crutches or a Wheelchair on Shabbat

Halachah is also a formal legal system, meaning we can only reach a desired conclusion if we can find systemically legitimate reasons to get us there. Shu”t Iggerot Moshe Orach Chayyim 4;90, dated 28 Tammuz, 5732 (1972), gives us an example. The questioner wanted to allow the use of crutches on Shabbat; R. Feinstein empathized with the goal but found the suggested method insufficient.

Crutches for an Adult

The questioner argued an adult who needs crutches was halachically equivalent to a toddler, whom Shabbat 128b allows a mother to help move (in an area with no ‘eruv) by picking up the child’s legs. The Gemara considers the child nosei et ‘atzmo, supporting its own weight, making the mother’s assistance insignificant in terms of carrying. To the questioner, the adult with crutches also basically moves him/herself, the crutches only there for balance or a bit of support.

R. Feinstein demurs. The Talmudic toddler walks like any other person. In R. Feinstein’s reconstruction of toddlerhood (which seems reasonable), the child really can already walk, s/he struggles still with uncertainty or, perhaps, standing on one leg while moving the other. The mother provides the security for the child to do what s/he already can, or perhaps supports for the interim part of the walking motion, when the child cannot stand on one leg. The child does enough, however, to be considered mobile in the usual way.

R. Feinstein recognizes differences among crutches-users, with some indeed largely supporting themselves even without the crutches. Still, he thinks the motion of putting the crutch in front and stepping to it means we cannot see the adult as self-supporting (he does not fully explain why; I think he means nosei et ‘atzmo works only for the ordinary walking motion).

Other people with crutches cannot lift their legs on their own at all; they put the crutch forward a step, lift and swing their whole body (dragging the leg along), then do it all over again; they are even less convincingly nosei et ‘atzmo, support their own weight.

Rishonim’s various reasons for the Gemara’s idea add to his resistance to extending it to crutches. He does know a view which includes anyone who can move him/herself, assisted or not, in nosei ‘atzmo, which clearly covers a person with crutches. Carrying such a person does not violate Shabbat at a Biblical level, and the parallel to a toddler would be apt and accurate.

He read Rashi, Tosafot, Rashba, and Ritva as having a different view. They thought the toddler lightens the load of whoever is helping by his/her self-propulsion. Some people with crutches are not able to provide assistance, are mostly dead weight because of their problems with walking. R. Feinstein thinks these authorities are enough of a critical mass to require us to avoid acting counter to their view, leaving many people on crutches without the claim of nosei et ‘atzmo.

Yoma 66b assumes a person who is ill cannot be carried. R. Feinstein points out that many ill people are more ambulatory than toddlers; the Gemara tells us illness leads people to weigh themselves down. (For all they could carry themselves, illness leads them to do the opposite).

Tosafot Shabbat 130a proves his distinction, in a discussion about when a circumcision knife has been left in a place where carrying is prohibited. One opinion in the Gemara treats all living creatures as nosei et ‘atzmo, including an infant; according to that view, Tosafot wonders, the Gemara should have suggested bringing the infant to the knife, not the other way around.

An ill person makes himself heavier, Tosafot says, and the baby will be ill after the circumcision.

People confined to wheelchairs or who can only walk leaning on others have many of the same issues, so R. Feinstein does not think the toddler case solves the problem.

A Wheelchair as Shoes

R. Feinstein instead suggests the person with locomotion problems could push him/herself in a wheelchair. For that person, the wheelchair is like shoes, the way s/he gets around, but under his/her own power. He actually thinks it might be better than shoes, since Rashi Shabbat 66a thinks we are not allowed to wear wooden shoes outdoors on Shabbat.

A wheelchair is more like clothing, since the person sits on it. Although it’s not tied to him/her, a wheelchair does not have the worry the Gemara raised, lest the person take off a piece of clothing to show it to admiring friends. For a similar example, the Gemara allowed amputees’ Shabbat use of the chairs or benches (without wheels, in Talmudic times) on which they used to drag themselves around.

Tosafot Shabbat 65b extended the idea to a cane, for someone who cannot walk without one, a rule codified in Shulchan Aruch 301;16-17. Magen Avraham thought being able to walk at home without a cane excluded a person from this leniency. We might think a person in a wheelchair who can walk a bit is similar, and therefore cannot use it outside the house on Shabbat, but R. Feinstein argues the person who can walk without a cane could walk the outside trip without a cane as well, it’s just easier with one. A person on crutches or in a wheelchair cannot possibly cover the distance, so the problem does not arise.

For others to push the wheelchair (where there’s no eruv) would violate a rabbinic prohibition against carrying people, regardless of nosei et ‘atzmo; given the person’s questionable ability at self-ambulation, the problem may be Biblical. People could lower the chair from sidewalk to street and vice versa, because the height of the curb is less than four amot, and there is no Shabbat problem with lifting an object, moving it less than four amot within the same halachic area, and putting it down.

The question asked about helping a person on crutches go to shul for a family celebration, and the entrance poses a problem if it has stairs or other barrier setting the shul off from the public area (without a barrier, the person in the wheelchair could roll him/herself inside).

He suggests having a non-Jew pick up half the chair and place it inside the shul, which does not yet constitute a Biblically prohibited act of moving the object as a whole from one type of area to another. The person is therefore asking the non-Jew to violate a rabbinic issue, which is a shevut de-shevut, a violation of the rabbinic prohibition against asking non-Jews to do for us on Shabbat what we may not, and the act requested itself also being a matter of rabbinic law.

Chazal allowed shevut de-shevut in cases of great need. The “great need” here, R Feinstein says, is the emotional pain the person will suffer if s/he cannot attend a relative’s joyous occasion. With half the chair in, we can then ask a different non-Jew to do the other half [R. Feinstein does not explain his certainty there will be two non-Jews available].

On the other hand, R. Feinstein rejected the questioner’s idea the non-Jew could then also bring the man’s crutches, based on the Gemara’s permitting a non-Jew to act in Biblically prohibited ways for people in distress. The inability to walk would be distressing, enough for the questioner to think the non-Jew should be able to bring the crutches before the man arrives, given our certainty of the distress the man will feel without them.

R. Feinstein corrects his misinterpretation of tza’ar, distress; the Gemara meant someone who is ill all over his/her body, as is clear in Rema Shulchan Aruch 328;17. Wanting to go somewhere does not qualify. More, R. Feinstein thinks this would be an example of acting in a way which will create a need of distress, not allowed even if the action would be permissible once the need was created.

He analogizes it to a case of tumah hutrah be-tzibbur, a community may all bring certain sacrifices, including the ritually impure among them, if the majority are ritually impure. Were a minority to be impure, we could not purposely cause impurity to others to create a majority, thus allowing many others to bring the sacrifice as well. Here, too, R. Feinstein does not think we can act in a way we know will create a need to ask a non-Jew to violate Shabbat on our behalves.

Finally, he says if the man can walk on crutches, he can certainly also walk by leaning on others, he just does not want to put them out. The desire to avoid inconveniencing others is not enough to allow violating Shabbat.

I do not think the responsum will raise hackles among readers, because many communities now have ‘eruvin, avoiding the problem, and because R. Feinstein does offer the wheelchair solution, With our sensitivities less likely to be triggered, the responsum does remind us of the importance of analyzing the underlying issues for the conclusions they teach us, despite the process sometimes leaving us unable to do that which we want. In this case, the man could leave crutches at the shul before Shabbat, or use the wheelchair even once he has arrived at the shul, joining the celebration to the best of his abilities.