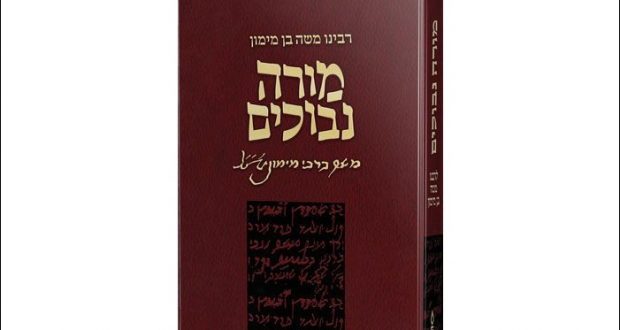 The Attitude of the Vilna Gaon Towards Moreh Nevuchim

The Shulchan Aruch (Yoreh Dei’ah, 179:6) writes: If someone was bitten by a scorpion it is permitted to whisper over him [a formula that was thought to be curative] even on Shabbos, even though it does not help at all…

On the words, “even though it does not help at all” the Biur HaGra (13) comments that the source for this statement of the Shulchan Aruch is the Rambam, The Gra adds:

And he followed in this the conclusions of philosophy, and thus he wrote that keshofim, and Names, and whispered formulae and demons and amulets are all false. But they have already rapped him on the head since we have found many stories in the Gemora that refer to Names and keshofim and the like, Philosophy caused him to err, with most of its teachings, and to explain the Gemoras as speaking metaphorically and to uproot the literal meaning of those passages. And chas vesholom I do not believe in them and in their many [teachings] but rather all is true according to the literal meaning, and there is also an inner meaning, but not the inner meaning that philosophers find which is the external meaning of those who have the truth.

The remarks about philosophy are general and quite critical of its overall approach. However with regard to the Rambam, the criticism of the Gaon seems to apply only to the position expressed here with regard to what we may call the occult and not to anything else.

The Gra, who is always careful with his wording, wrote, “…and thus he wrote that keshofim, and Names, and whispered formulae and demons and amulets are all false.” The subsequent remarks of the Gaon are manifestly a reaction to this and not to anything else the Rambam held or wrote. The Gra has no intention to cast aspersions on anything else written by the Rambam, On the contrary. Due to the high regard in which the Gaon held the Rambam, he felt it incumbent upon himself to justify at great length his decision to argue with the Rambam in this specific instance, when he felt it necessary to do so. The Gra has no intention to assert that anything else that the Rambam wrote has any particular issues. The Gra is only criticizing the fact that the Rambam explained the Gemoras in question here that deal with the subjects of keshofim and demons “metaphorically and to uproot the literal meaning of those passages.” Nothing more than that.

This understanding of the meaning of the Gra is also evident in remarks of HaRav Shlomo Luria, one of the prolific publishers of works of the Gra, in a letter he wrote to the author of Aliyos Eliahu, HaRav Yehoshua Heschel Levine. HaRav Luria wrote him about this comment of the Gra, saying that HaRav Luria had seen it himself in the “holy handwriting” of the Gra himself, proving that is properly attributed to the Gra and not to someone else preparing the Torah of the Gra for publication, as some observers argued. HaRav Luria asked HaRav Levine to publicize that fact.

In referring to the passage, HaRav Luria called it, a passage “about kishuf and demons.” This corroborates our assertion that the topic of the Gra’s comment is specifically the passage to which it refers and is not a general criticism of the approach of the Rambam or about any other remark that the Rambam made.

On the contrary we will see that there is reliable testimony and other proof that the Gaon thought very highly of everything the Rambam wrote and specifically including the Moreh Nevuchim, to which we now turn.

In Aliyos Eliahu there is a footnote whose subject matter is the attitude of the Gra towards Moreh Nevuchim. It appears on page 13, at the end of note 5. It is noted that the Gaon cites Moreh Nevuchim several times in his Commentary on Chumash, as well as in his commentary on Aggados. The references are not given but at least some appear in the Mafteiach Meforshim of the edition of Moreh Nevuchim prepared by me and recently published by Feldheim.

The footnote also describes an attributed anecdote that sheds further light on the attitude of the Vilna Gaon towards Moreh Nevuchim (my translation):

The rav etc. the elderly Moreinu Yisrael Gordon, a rav in Vilna (who knew the Gaon n.a. well and who used to live in an apartment in the wall and before he passed away the Gaon used to live in the court of the beit knesses) who used to frequent the home of the Gaon n.a. and one time he heard that Rav Treitel came in to the Gaon and was making a commotion, saying that he had seen for himself that people are making a regular practice of learning Moreh Nevuchim in the beis medrash and he asked the Gaon to protest their actions. The Gaon answered him with anger and said, `Who will dare to speak against the Rambam and his book, and who will grant me to be in the same room as he in Gan Eden?’ ” (I have added emphasis.)

Here is a very sharp and explicit reaction of the Gaon about the sefer Moreh Nevuchim and the prospect of learning it. I do not think that the Gaon often responded to suggestions from one of his inner circle “with anger” and his doing so reflects the presence of a deeply held position.

HaRav Yosef Zundel of Salant was a student of HaRav Chaim of Volozhin, who was in turn one of the main students of the Vilna Gaon. HaRav Yosef Zundel was the rebbe of HaRav Yisroel Salanter. He later moved to Eretz Yisrael and lived in Jerusalem in the community of the students of the Gra. He was one of the leading rabbonim of Jerusalem, and the father-in-law of HaRav Shmuel Salant, the longtime official rav of Jerusalem.

His family later published a small volume entitled Toldos HaTzaddik HaRav Yosef Zundel miSalant that includes a section of “Writings of the Gra of Vilna and haGrach of Volozhin zt”l, that were never printed, and were found among the manuscripts of their talmid R’ Yosef Zundel.”

Among these are two pieces attributed to the Gra. The first is a version of the Milos Higoyon of the Rambam that the Gra abridged. This is described therein as, “An abridged version of general principles of the wisdom of philosophy that is also relevant to the wisdom of dikduk, from the Wondrous Gaon of Vilna.” The editor added that this heading seems to be an addition of the original copyist who apparently made the copy during the life of the Gaon. The Gaon refers to some of these principles in his commentaries on Tanach, such as at the beginning of Koheles. This heading indicates that philosophy was not considered in a thoroughly negative light as may be implied by the remarks in Yoreh Dei’ah.

The next piece is more directly relevant to the Moreh Nevuchim. Unexpectedly, it is entitled, “General Rules for Chachmas HaEmes from the Gra zt”l.” This seems to have been the title given by the editor, who published the book many years after the passing of the Gra. However in the introductory remarks the Gra is referred to as living, indicating that at least the original copy was made during the life of the Gra, giving added credibility to the source of the content as genuine.

The introductory remarks say that these general principles apply to “chachmas ha’emes hakabalah sheleimah” – the true wisdom of the complete Kabalah. These principles are further said to be “more valuable than gold and pearls, of small size and great value.”

After such an introduction it will certainly surprise many that these wonderful rules are in fact short summaries of most of the chapters of the first part of Moreh Nevuchim that deal with terms found in the Written Torah as they apply to Hashem Yisborach. The rules of the Gaon are in the same order and largely parallel the chapters that explain terms in the first part of Moreh Nevuchim!

In effect the Gaon is saying that the lexical chapters of the first part of Moreh Nevuchim provide an introduction to learning Kabalah and thus certainly do not suffer from the shortcomings of philosophy. It is not clear what, if anything, to make of the fact that the Gaon did not note the connection with Moreh Nevuchim. In the Feldheim edition of Moreh Nevuchim these principles are reprinted along with an indication of which chapter of the Moreh the particular rule parallels.

In most cases the remarks of the Gra repeat or summarize what the Moreh says about the application of the particular term to Hashem Yisborach. It is difficult to know the exact attitude of the Gaon to the original chapters of Moreh Nevuchim, but it is clear that it is not the general attitude of the Gaon to philosophy as expressed in his comments in Yoreh Dei’ah.

Rabbi Mordecai Plaut is the editor of the recently-published Feldheim edition of Moreh Nevuchim. He lives in Jerusalem.