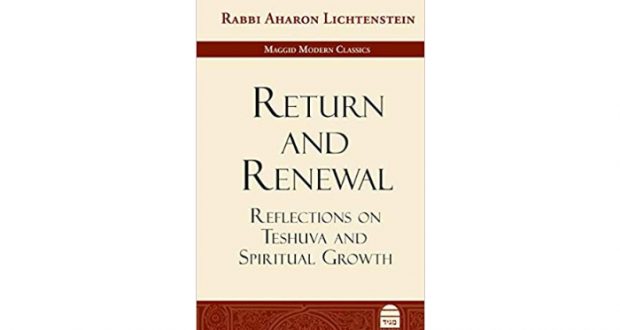 Return and Renewal: A Trailer

I only write book reviews when I believe readers would gain from securing a copy of the book and reading it. For Return and Renewal: Reflections on Teshuva and Spiritual Growth — talks on repentance mori ve-rabi R. Aharon Lichtenstein, zt”l, delivered between 1985 and 2010, either at Kehillat Jeshurun in New York or the Gruss Center in Yerushalayim, adapted and edited by two of R. Lichtenstein’s students, Prof. Michael S. Berger of Emory, and R. Reuven Ziegler of Koren Publishers, whose By His Light performed a similar service for other valuable talks of R. Lichtenstein’s—my only question is how I can convince you to put the book high up on your reading list.

My friend R. Dr. Shlomo Zuckier took one path, analyzing the book and its major themes, comparing it to the Rav’s justly celebrated On Repentance. I take a different tack here. When Hollywood wants us to see a movie, it prepares trailers, snippets to whet our appetite, while not giving the movie (or all its best parts) away. I am here to offer you my version of a trailer of Return and Renewal

When I read through the book last Rosh HaShanah and Yom Kippur, I folded over pages where RA”L made a particularly valuable point. I will share five here, chosen at random, and assure you there are many more, let alone what other parts of the book might catch your fancy.

Following the order of the book, I’ll start with p. 21, from “Purify Our Hearts to Serve You with Truth,” delivered at KJ in 1992.

Errors in Service of Hashem

In a section where RA”L posits three types of significant errors—“in Halakha, in emuna, and in seeking to understand God”—the page I folded over splits errors in Halakha as well (RA”L enjoyed dividing ideas into their various spots on a conceptual tree—x concept splits into two, one of which splits into another two was a familiar expression of his).

He finds a reference to different kinds of error in the prayer of R. Nechunya ben Ha-kaneh (Berachot 28b), codified by Rambam in Hilkhot Berachot 10;23. The prayer twice asks Hashem for help to avoid stumbling in Halakha. The second time, the prayer also expresses the hope one’s friends will not have the opportunity to rejoice over the person’s error and asks to not oneself rejoice in others’ errors.

The first kind of error R. Lichtenstein sees is in basic understanding. We can stumble in “the elucidation of Torah on the purely speculative plane,” something a ben Torah will wish to avoid “out of commitment to truth as a universal value, and out of responsibility to the singular importance of the divine word.”

Where “envious peers” might gain “instant and intense gratification,” however, is were a colleague to err in practical halachic ruling, the reason we again ask for protection from error. In the coming pages, RA”L adds two other two kinds, errors of faith and in seeking to understand Hashem. Page 21 itself struck a chord for its reminder of how committed to truth we are supposed to be, RA”L’s sensitivity to how even Torah scholars fall into envy, enjoying others’ comeuppances, and his distinguishing between the theoretical study of Torah and its practical application.

All missteps and imperfections we should address as part of a full teshuvah, RA”L reminded us.

On p. 51, in the course of “The Integrity of Teshuva,” delivered at KJ in 1997, RA”L insists on the value of partial teshuva, argues it can produce partial tahara, purification, an idea impossible in physical purity (he registers the important caveat the person is not indifferent to the sins not currently being repented, only not able right then to work on them assiduously or successfully).

Taking the argument further—a characteristic move for RA”L—he says he would “submit that in purity, as in serving God generally, a measure of selectivity is not only licit but desirable.” A Jew must be committed to serving Hashem in all commanded ways, cannot dismiss any sin as unimportant, but the attempt to address all failings at one time may be counterproductive, overreach bringing worse results.

“We cannot press with equal vigor on all fronts. Even if we could, there is much to be said—with respect to divine service generally, and the regenerative aspect of teshuva specifically—for channeling energies into particular areas.” In some of my writings, I have argued for more careful prioritizing of our spiritual energies; I was excited to be reminded I learned it from RA”L.

For those who did not yet learn it from RA”L, the book offers the chance.

Page 75 of the book comes in the middle of “Teshuva: Impetus and Motive,” delivered at the Gruss Institute in 1993.  RA”L notes two places where crying takes a central role in repentance: R. Elazar b. Dordaya (whose full story is told on Avodah Zarah 17a), who cried after realizing he had to take full personal responsibility for his rehabilitation, and Rambam, who includes crying before God among the paths of repentance (Hilchot Teshuva 2;4).

“But where do we stand in relation to crying?” asks RA”L. He suggests “we” see crying as beneath us, as the act of the ignorant and superstitious, when he is confident that, at least at Ne’ilah, there has to be room for some tears. He notes Wordsworth’s “celebrated line…’thoughts that lie too deep for tears,’” and questions whether the thoughts of the non-crying Modern Orthodox lie too deep—or too shallow. [For fans of RA”L’s proficient and apt insertions of Western culture as part of his presentation of Torah ideals, this is but one of many.]

Yosef ha-Tzaddik only found his way back to his family, RA”L points out, after he broke down crying, loudly enough for Pharaoh’s house to hear. Yosef, “great, cultured, urbane second-in-command,” had to learn to break down to be able to return to where he wanted, “the bosom of his family.”

A valuable point on its own, it was also a reminder we can improperly pigeonhole RA”L for his many intellectual achievements, forces us to see his religiosity drew from the intellectual and emotional.

P. 103 comes in the middle of “Mediocre Teshuva and the Teshuva of the Mediocre,” where RA”L grapples with Mesillat Yesharim’s portrayal of the chassid, a person spiritually elevated above the tzaddik, who reaches absolute perfection. As we saw earlier, RA”L insists there must be intermediate steps, is troubled by the possibility Hashem would treat someone who came close to but did not reach perfection the same as people who did not make those efforts.

In the tahara needed to enter the Beit HaMikdash, absolutism does reign. Whether physical ritual impurity came to a person deliberately or incidentally, whether the mikveh in which s/he immersed was missing a teaspoon or many gallons of required water, it’s all the same—a Jew may not enter the Mikdash until fully tahor.

For the taharah of repentance, p. 104: “Furthermore, if we indeed reach this conclusion…there may be no greater way to weaken the resolve…of ba’alei teshuva.” Why try for the unattainable? Making our standards too absolute upsets us because of the inevitability of our failure, can discourage us from the effort.

There must be, RA”L is sure, levels of purification in teshuva, each higher level a value, rewarded even if it stops there.

The History We Carry With Us

“La-kol Zeman: Teshuva Within Four Time Frames of Our Lives” was delivered at Gruss in 5750 (1989), and on p. 146, RA”L notes the difference of opinion among rishonim as to whether one should confess sins from previous years (if a person committed sin x in year 1, repented it and did not return to it, should s/he include it in his/her confessions of sin in years 2 and on?). RA”L summarizes the views, says

…presumably Tannaim and Rishonim dispute whether an annual repetition of teshuva for the same occurrence of sin is in order. I say, ‘presumably,’ because quite frankly I find the position that a person ought not to review earlier transgressions to be totally inexplicable. Is it possible sins, having once been expiated, can be consigned to one’s spiritual dustbin?

He therefore limits the dispute to the technical issue of formal confession. He is sure the sin must stay alive in our consciousnesses, a cautionary tale, part of how we fortify ourselves against future missteps.

The passage reminds us of the usually conservative RA”L’s willingness to chart his own course where he was convinced it was necessary. Faced with a seemingly clear statement, his certainty of the workings of human religiosity was enough to read it in a way more in line with that understanding.

The Dangers of the Trailer

Perhaps my selections don’t fit your tastes. Many talented and experienced people work on Hollywood trailers, slaved over for long hours, run by test audiences. If my examples here convince you this is a book which will enhance the upcoming Yamim Noraim, I am pleased.

If they do not, please be sure the fault lies with my choices and presentation. R. Aharon Lichtenstein zt”l was a gadol be-Yisrael in the prosaic meaning of the term, in his knowledge and understanding of Torah and halachah, and in the sense of someone whose presentations of Jewish thought shows us how to serve Hashem in ways we would not have known on our own (a path laid by two of his teachers, his father-in-law, R. Yosef Dov Soloveitchik, and his rebbe at Chaim Berlin, R. Hutner, zt”l.).

Return and Renewal is a great way to meet this gadol if you have not yet, to deepen your acquaintance if you have, and to relish the memories it will bring to life if you’re a longtime student, from close or far. Return and Renewal, at bookstores near you, on Amazon and at Maggid Press.