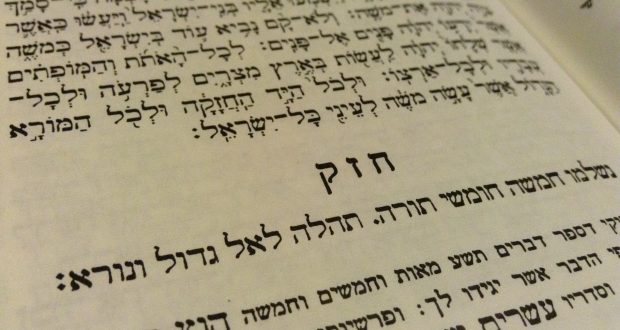 As we finish reading Bamidbar this week, we can take the time to ask why the congregation says “Chazak, chazak ve-nischazek (alt: ve-nischazak)” after completing the reading of one of the five books of Moshe. Literally, the words mean, “Strong, strong and we will become strong.” The implication is that after we finish studying a book of the Bible, we pray or bless ourselves to continue growing religiously. What is this about?

In 15th century Worms, one time a community experienced a quarrel over who should be called to the Torah for the final aliyah on the Shabbos of Vayakhel-Pekudei. After the sixth aliyah, two men argued for two hours over the honor as the Torah scroll lay on the table. Finally, most of the community left the synagogue and went to a nearby school where they completed the Torah reading.

The community asked Rav Moshe (Maharam) Mintz (Responsa, no. 85) what to do the next week. Since in the synagogue, the Torah reading had never been completed, should they repeat Vayakhel-Pekudei and then continue through Vayikra? Or does the reading in the school satisfy the community’s requirement.

It is true that if a community does not read the weekly portion one week, it should read two portions the next (Or Zaru’a, Shabbos, no. 45). However, for a number of reasons, Maharam Mintz concludes that the community should just read Vayikra. The Gemara (Rosh Hashanah 34b) says that if you hear the shofar blasts at different times of the day, you fulfill your obligation. Similarly, Maharam Mintz argues, the community heard the complete Torah reading, even if it was at two times and in two places.

Additionally, even if they had failed to complete the reading, they cannot repeat two Torah portions plus a third. The Or Zaru’a only said to read two at a time if you missed one week. He did not say to read multiple portions in order to catch up. That would create an undue burden on a small community. Rather, says Maharam Mintz, since sometimes we read two portions based on the calendar, we can impose on a community that misses one week to read two portions the next. But in this case, they missed a double portion and would have to read three the next week. We do not see such an obligation on the community.

Additionally, whenever two portions are read jointly, we make sure that during a single aliyah we connect the two. One person receives the end of one portion and the beginning of the other, without interruption. This unifies the Torah reading of the day. However, Maharam Mintz points out that at the end of Pekudei, the community would have to say “Chazak” and then continue reading into Vayikra within the same aliyah. The “Chazak” would serve as an interruption. Therefore, we cannot read from two different books of the Torah on a Shabbos morning.

III. Strength to Return and to Move On

Maharam Mintz takes this opportunity to explain why we say “Chazak” after we finish reading a book of the Torah. He offers two possible interpretations. First he compares “Chazak” to the “Hadran” recited at a siyum celebration of the conclusion of studying a sacred text, such as a tractate of Talmud. A siyum, which Maharam Mintz details in another responsum (no. 119), consists of a mitzvah meal that even a mourner may attend. During the Nine Days, when Ashkenazim — and to a limited extent Sephardim — do not eat meat, we may eat meat at a siyum because of the mitzvah celebration.

At a siyum, the rabbi or leader recites the Hadran, which begins with a statement to the text, “I will return to you and you will return to me.” Maharam Mintz explains that we are warned not to forget the Torah we learn (Deut. 4:9). It says in Avos (4:10): “Whoever forgets one word of his study, scripture accounts it to him as if he were mortally guilty.” Rabbeinu Yonah (ad loc.) explains that if you forget Torah, you will make mistakes in practice. Rashbatz (Magen Avos, ad loc.) suggests it refers even to cases unrelated to practice. If we forgot the Torah we learned, we lose the merit of protection from that Torah. Either way, we must return to the text and review it so that we do not forget it. Similarly, when we finish reading a book of the Torah, we say Chazak to imply that we must return to this text to be strengthened, to review and remember it.

Alternatively, Maharam Mintz suggests that Chazak is similar to the practice to say “Yashar koach” to someone who performs a mitzvah. (Technically, the phrase should be pronounced “Yishar kochakha.”) Maharam Mintz explains that this phrase congratulates someone on completing a mitzvah and blessing him that he should perform other mitzvos. Similarly, when we complete a book for the Torah, we wish each other strength to move on to, and complete, another book of the Torah.