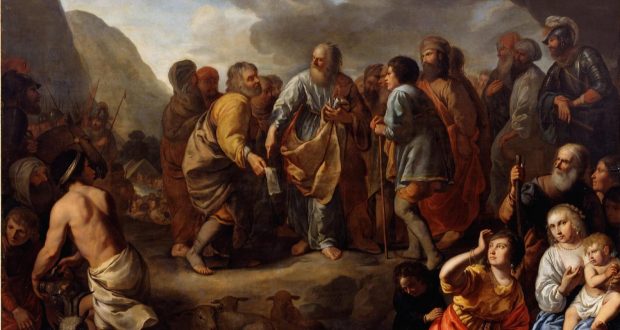 Everyone Needs A Yisro

My comments at my son‘s bar mitzvah party (a few weeks before his actual birthday in the summer):

A number of questions jump out of this passage. Why does Moshe speak with Chovav when his father-in-law’s name is Yisro? Ibn Ezra and some others suggest that maybe Chovav is Moshe’s brother-in-law but Rashi quotes Chazal who say this is just another name for Yisro. Why does Moshe use an unfamiliar name for this familiar person?

Why would the Jews need Yisro to serve as their eyes, their guide in the desert? Even if Yisro knew the desert well, which would make sense, the very next few verses talk about how the Jews were guided by the Aron and the cloud of smoke. They didn’t need a human guide when Hashem served as their guide.

Did Moshe convince Yisro to stay? The story ends abruptly and we don’t know.

Additionally, why is Yisro there at all? In Parashas Yisro, at the very end of the chapter about Yisro’s advice regarding judges, the Torah says that Yisro returned to his land. The Gemara (Zevachim 116a) records a debate whether Yisro came before Matan Torah or after. If he came after, then the story is out of chronological order and both records of him returning to his land could be talking about the same time. He came to the Jews once and returned home once. Moshe tried to convince him to stay but failed, and Yisro returned to Midian.

However, Ramban follows the view that Yisro came before Matan Torah. He suggests that Yisro returned to his land, then joined the Jews in the desert again. Moshe convinced him to remain and his children inherited Yericho. According to the previous view, we have to say that eventually Yisro’s descendants joined the Jews and inhabited Yericho. But according to the Ramban, he joined Moshe and the Jews, went back to Midian and then left again to join Moshe and the Jews in the desert. Why would Yisro change his mind about whether to stay in Midian or with the Jews?

I suggest that if we understand two different approaches to Avodas Hashem, we will be able to explain Yisro’s movements in the desert and beyond.

The Mekhilta (Ex. 16:4) quotes R. Shimon Bar Yochai as saying that the Torah was only given to be learned by those who eat the man (manna), the divine food provided in the desert. Figuratively, this means that only people dedicated completely to religious perfection, to the exclusion of earning a living, only they can truly master the Torah. According to this view, the ideal religious life exists in solitude, in constant devotion. Similarly, the Gemara (Berachos 35b) quotes a debate between R. Shimon Bar Yochai and R. Yishmael.  According to  R. Yishmael, a man has to learn Torah when he is not working. R. Shimon Bar Yochai objects that a man will end up being busy with work constantly. Rather, he must always learn Torah and leave work for others.

R. Shimon Bar Yochai believes that Torah can be truly observed only in isolation. We must focus on our own religious lives and not the outside world. R. Yishmael believes in a healthy balance, in both work and Torah. According to R. Yishmael, Judaism encourages engagement with the world.

Yisro was a convert, an idealist who fell in love with Hashem. He came to the Torah out of passion and demanded a life led accordingly. He could not bear a life that involves compromise, that sacrifices learning time for building, planting and harvesting. He left the Jewish people to return to Midian and convert others to his newfound religion. However, Yisro learned that a life of outreach requires compromise, exposure. You have to talk sports and politics with others in order to draw them close to Torah. You have to sacrifice some of your own purity for the sake of others. An uncompromising idealist like Yisro cannot leave the beis medrash like that. It is torture. So he returned to the Jews, where he had experienced the purity of Matan Torah. The Jews at Har Sinai were enveloped in kedushah, fully devoted day and night to experiencing holiness. Yisro thought he could take it with him to Midian but he was wrong, and so he returned.

However, when Yisro came back, he found a nation preparing to leave that life. The Jews were about to enter the land of Israel, to fight a war and then establish farms and cities. If not for the sin of the spies, the Jews would have entered Israel almost immediately. We see that in Moshe’s argument to Yisro. Moshe says that they are going to the place that Hashem had promised them. Rav Soloveitchik used to say that he would cry when reading these verses. Moshe was all prepared to take the people into Israel immediately and then it all fell apart. Moments later, they sinned at the Kivros Ha-Ta’avah, where they demanded meat, showing their spiritual flaws. And then they sinned with the spies and extended their stay in the desert by decades. When Moshe spoke to Yisro, it seemed like the desert stay that Yisro so desired was almost over. What should Yisro do?

Yisro suggested that he return to Midian again, this time with a different plan. Instead of trying to convert others, he would live a holy life in seclusion. It was his land and birthplace. He knew how to survive there. He would not waste any time learning the ropes. He could return to his own estate without having to meet his neighbors and establish relations.

How did Moshe counter this argument? Moshe said that Yisro knew the Jewish encampments. Yisro was called Chovav, which Rashi explains means someone who treasures the Torah. Yisro understood the Matan Torah phase of existence, the total devotion. When the Jews entered a new phase of engagement, they needed someone like him, an idealist, a man of iron commitment, to serve as their eyes, their social critic. They needed a fanatic to remind them of their ideals, of their principles. When someone steps outside of a ghetto, he must balance carefully his actions. He needs to remember his identity or he will lose his balance. Yisro was there to remind everyone who they were, what they represented. He was the R. Shimon Bar Yochai to the masses of R. Yishmaels.

Yisro agreed to stay with the Jews and his descendants eventually settled in Yericho. Or rather, they almost did. The midrash Tanchuma (Yisro, par. 4) says that Yisro was given the desolate, destroyed city of Yericho. Presumably, this lonely city would be the perfect place for an isolationist like Yisro. However, Yericho’s lands were extremely fertile. They presented an opportunity for successful farming, and Yisro’s family did not want that distraction. And so they left Yericho for the Judean desert where they studied under Ya’abetz, Osniel Ben Kenaz (Rashi, Judges 1:16).

But even a R. Yishmael needs to remember the lessons of Yisro and R. Shimon Bar Yochai. As we grow up and thrive in yeshiva, eventually we leave it. But we keep the message of uncompromising principles with us. We remember constantly that the Torah is the true guide to life, the instruction book to our life and the yardstick by which we measure all of our experiences.