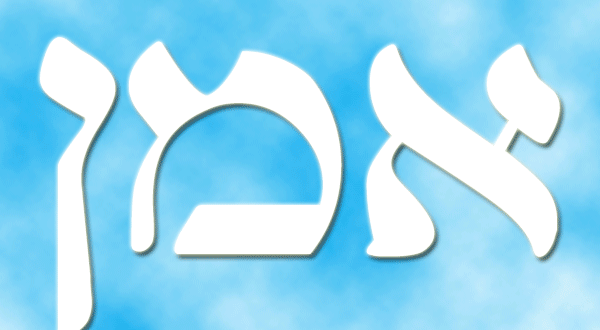 Answer: The nature of amen changes with the context of the statement to which one is responding. Most classic berachot praise Hashem for providing one of many things for man (e.g., food, seeing something noteworthy, providing something historical). If one hears someone praising Hashem, he is required to express his agreement (Berachot 51b; Shulchan Aruch, Orach Chayim 215:2).

The Magen Avraham (215:3; also, Mishna Berura 215:9) refers to a midrash that if one hears someone blessing a fellow Jew, he is required to answer amen, even if Hashem’s Name is not invoked. This, as opposed to the first element, is a mitzva between man and fellow man – to add one’s voice in requesting Him to do good for someone. Several Acharonim assume that this is a proper thing rather than an absolute obligation (see Yechaveh Da’at III:9 citing the Netziv; Aruch Hashulchan, OC 215:1).

If one blesses you, it makes sense to answer Amen, as your voice in request for yourself has value, as we know from davening. It may be even more appropriate here because it is possible that the good wishes extend beyond the mourner. Some have the practice to say Hamakom … in the plural even if there is one mourner present, and the most common explanation is that it includes the deceased (see Nitei Gavriel, Aveilut I:1). Indeed, the Rambam (Avel 14:7) wrote that nichum aveilim helps the mourners and the deceased. The connection of the mourner to those who mourn for Jerusalem, which different authorities understood with minor variations, may mean that we are also blessing all of the nation – that we should soon see its rebuilding, which makes answering Amen appropriate.

On the other hand, it is possible that Hamakom is not a good wish but a philosophical message to the mourner, along the following lines. It is hard to come to terms with the loss of a close relative, but just as the Jewish People has learned to deal with the destruction of the Temple and believe in its rebuilding, so too the mourner should accept the Divine decree, believe that it was for the best, and look forward to the deceased’s return with techiyat hameitim. Most authorities, though, seem to understand Hamakom as a prayer/blessing. This is certainly the case for the Sephardic saying of “you shall be comforted from the Heaven” and for the increasingly popular addition of “and you shall not continue to have pain anymore.”

There is also logic to say Amen to fulfill the concept that some Acharonim discuss (see Divrei Sofrim 376:1) of accepting the consolations. On the other hand, there can be ways other than saying the word Amen to do that. I saw a citation of Rav Moshe Feinstein preferring not to say Amen because it is as if the mourner is waiting to be a mourner again. It is not clear what in the words implies that and, if so, why it is okay for the consoler to say so.

My experience at shiva homes over the decades is that mourners did not usually say Amen (as I have seen in the name of Rav Chaim Kaniefsky). However, several contemporary works encourage it, based on the opinion of Rav Shlomo Zalman Auerbach (see Nitei Gavriel ibid. 2; P’nei Baruch 11:5; Teshuvot V’hanhagot V:309.19) and based on halachic logic and this is not a rare occurrence. We have no problem with this developing into the minhag, but in deference to what has apparently been the more prevalent practice, we would not make a ruling that an avel should say it. (Actually, none of the sources we saw, in either direction, use terms of imperative.)

It is less common for other consolers to answer Amen. There is two-pronged logic for other consolers to not answer Amen: 1) Although most use the same standard statement, it is a private matter between the consoler and the mourner, which not everyone should be expected to listen to (some people are shy); 2) The consoler will be saying the same thing soon, and therefore it is not crucial to do it now.