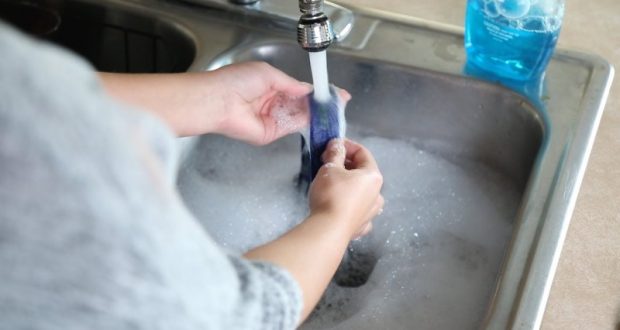 Nylon came along in the 1930s. Shu”t Tzitz Eliezer 5;10, dated 24 Iyyar 5714 (1954) responds to a questioner who wondered whether its resistance to absorption allows us to treat it more like leather than wool, linen, or silk. Dabbing water on the latter three on Shabbat (such as if they became dirty) violates libbun, laundering.

Nylon’s lack of absorption opens the door to arguing it is more like leather for Shabbat purposes, with a different standard for what we may or may not do, as Tzitz Eliezer will elaborate.

At first glance, the comparison does not hold up. Chaza”l allowed splashing water on leather specifically because people did not clean it with water. People do clean nylon (Tzitz Eliezer’s questioner wanted to know about a nylon tablecloth), in contrast, with a damp rag or brush, which they rub on the dirt. They do not tend to rub the two sides of the stain against each other, a classic form of washing, or wet the garment and wring it out, as with other materials, but it’s closer than what’s done with leather.

Zevachim 94, where leather is discussed, shows this is not the crucial factor. The Gemara focuses on whether leather qualifies as launderable at all. Obviously, people clean leather; we need to know whether what they do counts as kibbus, laundering prohibited on Shabbat. Tzitz Eliezer understands the Gemara to say kiskus, rubbing the two sides of the garment against each other, is kibbus, but—for leather—washing or dabbing water is not.

Levush makes the point explicitly, rubbing two sides of a leather item is its kibbus, its form of laundering. In his view, whenever a material absorbs water, soaking the item is itself laundering, since the water gets in where it needs to clean. Where it does not, rubbing is.

Rashi used similar reasoning to explain why hair never has a problem of sechitah, wringing; hair never absorbs, which means squeezing hair at most rubs the water off the surface. Rambam, Laws of Shabbat 9;11, included hair and leather among items immune to sechitah (which Tzitz Eliezer reads to mean their kibbus, laundering, will differ from other materials as well).

R. Waldenburg thinks Rambam required kiskus, rubbing together, and that Rashi focused on resistance to absorption, like leather and hair.  Both ideas apply just as well to nylon, which is why R. Waldenburg treats nylon like leather for our purposes.

Except Tzitz Eliezer recognizes the rules about leather are not as clear as he has presented them thus far. Mishnah Berurah 302 understood Shulchan Aruch to completely allow washing leather, but knew of authorities who allowed only dabbing, placing water on the dirt in the hopes it will wash away, without touching or rubbing it.

Still, Beit Yosef, Perishah, Levush, and Chayye Adam all thought problems started only when the two sides of the garment were rubbed against each other. Without that, there was no laundering and no problem.

R. Waldenburg points out the middle ground, a person puts water on the spot and then rubs it with his/her own hands; it is not kiskus, the defined form of laundering, but does involve more than pouring or dabbing the water and letting nature take its course. He thinks Shulchan Aruch Ha-Rav allowed this explicitly—R. Liady, the first Lubavitcher rebbe, who wrote this book of halachah, thought there was no Biblical prohibition of laundering for leather at all. When Chaza”l made a rabbinic version, they included only kiskus, using the friction of the two sides of the garment against each other to clean off dirt. In his view, Chazal never addressed putting water on a spot and then rubbing it with one’s hand or fingers.

Aruch HaShulchan, too, limited any laundering for leather to kiskus.

The Rabbis Required Us to Treat Leather as Washable

Tzitz Eliezer offers two possible sources for Shulchan Aruch Ha-Rav’s certainty. Rambam cites the idea of kibbus of a leather shoe in chapter 22 of the laws of Shabbat, a chapter devoted to shevutim, Rabbinic ordinances made to enhance our Shabbat observance and to help us avoid more serious violations. Nowhere in the discussion did Rambam mention a worry about slipping over into a Biblical violation should one wash the leather in some other way.

When Rashi to Shabbat discussed the issues of washing softer leather (like those used to make pillows or cushions), he said it was shayach, relevant, to speak of laundering (since the leather is so soft, we begin to worry it will absorb, I think). R. Waldenburg thinks the word shayach means we’re reasoning, not ruling. Because washing softer leather affects tumah and taharah, ritual purity and impurity, it makes sense to see it as operative in terms of Shabbat as well.

Such reasoning from analogy and likelihood only works for rabbinic rules, however. In Torah law, the Torah did or did not prohibit or allow an activity. Once we see Rashi reasoning his way to a conclusion, we can be sure he was dealing with an issue of rabbinic law.

The particulars aside, R. Waldenburg concludes, he stands by his view regarding nylon, putting water on it is allowed on Shabbat, as it is with leather garments.