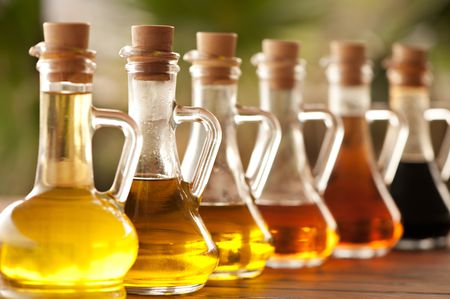 Vinegar Made in Wine-Flavored Casks

4 Iyyar: R. Moshe Feinstein on Vinegar Made in Wine-Flavored Casks

Shu”t Iggerot Moshe Yoreh De’ah 2;36, dated 4 Iyyar 5722 (1962) starts with vinegar, and takes us of a tour of a few general rules of kashrut.  The Assistant Chief Rabbi of Strasbourg asked about the alcohol in it, produced in utensils previously used to make wine.

That wine is called stam yeynam, wine which belongs to a non-Jew without our having any reason to believe it was used to worship a putative power other than Hashem. Jews certainly may not drink stam yeynam, in many case are prohibited from benefiting from it. Was the taste absorbed by the utensils a problem for the vinegar? The question carried more than the usual weight because it was difficult to find other vinegar in France.

Absorbed Material Does Not Convert the Whole

R. Feinstein starts with by noting an oddity about how we restore pots to being kosher, boiling water in them. Doesn’t the pot reabsorb the prohibited material in the course of the boiling? Tosafot and Rosh thought we boil water twice, the amount re-absorbed during the first boiling clearly less than one in sixty of the water in the pot, the threshold for bittul, nullification. When we boil water again, it nullifies whatever was re-absorbed in the first boiling.

Their view must limit the principle of chatichah ‘atzmah na’aseit neveilah to basar be-chalav, meat cooked with milk. Chatichah ‘atzmah says when one item absorbs prohibited material, it contaminates the entire host, means we need sixty times the host to nullify it rather than sixty times the original absorbed prohibition. For the water Tosafot and Rosh were discussing, their logic only works if the re-absorbed taste from the first boiling does not render the entire pot again fully non-kosher.

Unfortunately, Rema rules we follow the view which applies chatichah ‘atzmah beyond meat and milk issues. The original beet alcohol did not have sixty times the wine alcohol whose taste is absorbed within the casks, making all the beet alcohol stam yeynam.

Rema gives a bit of room for leniency by allowing relying on authorities who think chatichah ‘atzmah does not apply to liquid mixtures (lach be-lach), in cases of great loss. Sha”ch Yoreh De’ah 103;20 made clear material absorbed into and out of the walls of a pot counts as liquid (even if it was originally solid).

Were we to define the situation in France as one of great loss or need, we could say the beet alcohol does not become converted to prohibited material by absorbing some wine, making the five percent solution enough to nullify the problematic alcohol.

R. Feinstein goes a step further. In his view, Rema allowed items in cases of great loss or need only when he thought they were fundamentally permitted; he adopted the stringent view of such situations only where they do not cause problems, a stringency in case the other view was correct. For R. Feinstein, we need not exercise such caution with Rabbinic laws (Chazal allowed certain leniencies within their ordinances).

Shulchan Aruch’s having ruled the other way convinces R. Feinstein he is right, by law chatichah atzmah affects only meat and milk, as many rishonim had said. He cannot believe later authorities would dismiss the views of the earlier ones and rule against them. Instead, he reads Rema to be saying we prefer to follow the stringent view, in case; if so, when there’s a great need, or an issue that is completely Rabbinic, we need not use that stringency.

This leniency only works if the alcohol used for the vinegar itself is non-wine alcohol. Usually, we have to verify such facts ourselves, cannot trust even a non-Jew mesi’ach lefi tumo, revealing information in the course of conversation, without realizing why that information matters to us (where the non-Jew knows the issue affects us, we worry s/he will lie, either to hurt or help us).

The Rabbinic element comes again to R. Feinstein’s rescue. For Rabbinic prohibitions, we do accept a non-Jew’s casual revelations, especially since it’s lo itchazek issura, has never been defined as prohibited. In halachah, permitted unless proven otherwise is the rule; itchazek issura means it was at some point prohibited, which makes the burden of proof on those who wish to claim it is now permitted. This alcohol was never itchazek issura.

Still, it’s always better to do better, R. Feinstein urges them to install a kashrut supervisor if they can, who might convince the vinegar maker to use non-wine casks, or to do hag’alah, boiling water in the casks to nullify the absorbed prohibited material.

Bottom line–yes; getting to yes reminded/introduced us to some major concepts of kashrut.

Studying Torah During the Repetition of the Amidah

Twelve years later—4 Iyyar 5734 (1974)—Iggerot Moshe Orach Chayyim 4;19 opposes studying Torah during the chazzan’s repetition of the Amidah. Some authorities permitted it, as long as the person could pay attention to the end of the berachah and say amen, but R. Feinstein sides with Vavei HaAmudim, who thought it would teach non-Torah scholars there was no need to pay attention to the repetition. Similar to how Rema Orach Chayyim 90;18 encourages Torah scholars to join a minyan even if they could by rights pray elsewhere (such as a Torah scholar whose central occupation and preoccupation is his study, who is permitted to pray in his study hall even without a minyan, to save time), Torah scholars might be using their time well by studying during the repetition of the Amidah, might be answering amen to each brachah, but non-Torah scholars will get the wrong message.

R. Feinstein adds another concern, the need for nine men to listen to the chazzan. Instituted to be performed with a minyan, originally on behalf of those who might know how to pray, the repetition requires a minyan’s involvement. Tur quotes his father Rosh as saying a lack of nine responding turns the chazzan’s repetition almost into brachah le-vatallah, a futile blessing. R. Feinstein cites other sources to argue it is a literal brachah le-vattalah if nine do not respond.

He thinks, therefore, each person should act as if there might not be nine others responding, and see himself as fully obligated to respond. But even if one is sure there are nine others, the problem of implicitly teaching others to ignore the repetition of the Amidah still applies.

We can use the vinegar in France in 1962 and must listen carefully to the chazzan’s repetition of the Amidah, with the reasons being as important as the conclusions.