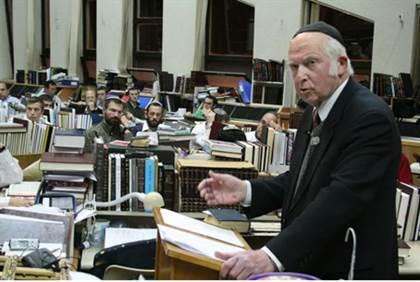 How does one identify one’s community? Today, the obvious answer to this today is which one? We are all members of what sociologists call overlapping communities: our neighborhoods, our workplaces, our synagogues, our families (nuclear and extended), our interest groups, etc. While all of these groupings define who we are, some define us more than others. It is in this context that I want to share some of my reflections about my teacher and mentor, Rav Aharon Lichtenstein.

When Rav Lichtenstein spoke of the ‘Torah world” – and he used this expression quite often – he revealed a great deal about his own self-identification, as well as that which he advocated to his students and to the Modern Orthodox community more generally.

The context of one use of this expression quickly bears witness to what he meant by it: For it was specifically when haredi leader Rav Elazar Menachem Man Shach made some of most problematic pronouncements about secular Israelis that Rav Lichtenstein contextualized his disagreement with him by writing, in the general daily, Maariv (June 21, 1991), that he was from the same world as Rav Shach. That is to say that while R. Lichtenstein recognized a strong connection with all Jews and with all Israelis, his “world” was one populated by those who shared his commitments to Torah.

In another context, he explicated the commonality that should inform the community of all truly religious Jews:

Surely we need to recognize, and the point can hardly be overemphasized, that our basic affinity is with those – past, present or future – to whom tzelem E-lokim, malkhut Shamayim and avodat Hashem are the basic categories of human existence. [1]“Centrist Orthodoxy,” By His Light, ed. Reuven Ziegler (Alon Shevut: Yeshivat Har Etzion, 2002), p. 225.

Indeed, these categories were the ones by which R. Lichtenstein defined his own existence, and the ones he believed to be the central pillars of the Jewish tradition. It would stand to follow that Modern Orthodox Jews loyal to that tradition would surely recognize the basic affinity we have with those to our religious right.

Part of R. Lichtenstein’s comfort with the haredi sector came from his early immersion in haredi institutions and from his sustained exposure to some of its greatest figures. I imagine that anyone who knew Rav Yitzchak Hutner and Rav Shlomo Zalman Auerbach the way he did could not have carried a jaundiced or simplistically negative view of these two luminaries’ sector. Just the opposite, the many positive experiences R. Lichtenstein had with the haredi sector created an appreciation of its many strengths, as well as an appreciation of the corresponding weaknesses in our own camp. [2]Of course, this did not preclude Rav Lichtenstein from feeling that there were many things that the haredi world could learn from Modern Orthodoxy as well: Were I addressing a haredi audience, I … Continue reading

Accordingly, R. Lichtenstein reflected upon the greater faithfulness of the haredi approach in certain critical respects:

What… mandates… that children in a mamalakhti-dati school in Jerusalem should go home at noon, while their peers in a heder learn until evening? What… dictates that a haredi of high school age makes do with three weeks’ summer vacation while his modern counterpart has well over two months? Does a universalist concern require that youngsters – and hence most adults as well – know a good deal about the Rolling Stones but nothing of the Avnei Nezer? [3]“The Future of Centrist Orthodoxy,” p. 323. (While of the some of the gaps that R. Lichtenstein mentioned in this presentation that was given in 1990 have been ameliorated and there is room to … Continue reading

Yet his sincere and genuine appreciation of the haredi sector’s strengths was never a reason to compromise other ideals that he found lacking there, but rather to learn from the success of others whose worldview he saw as sufficiently proximate to allow for emulation.

Such a position was to have a strong impact on my own path: Having straddled the fence for a number of years, I sought R. Lichtenstein’s guidance in choosing a direction. I framed the issue as a conflict between ideology and sociology – ideologically, I was in the modern camp; but I could not help noticing the greater sociological successes of the haredi world. He seemed to identify with the formulation and indicated that he had faced a similar dilemma in his own youth. But as he saw it, one had to choose based on what one understands to be true, not on what works better.

R. Lichtenstein did not minimize the very real disagreements between the Modern Orthodox/dati leumi and haredi camps nor did he advocate that we always work together. He not only acknowledged our differences; he did not hesitate to express himself about them.

But even while he took ideological disagreements very seriously, R. Lichtenstein was a master of perspective. Hence these types of divisions did not prevent him from finding community with Torah scholars on the other side of the divide. When once asking him a question, he suggested consulting an outstanding haredi posek in our neighborhood, saying that he would be in a better position to answer a question that related to the specifics of our neighborhood. The fact that a great posek was haredi did not prevent Rav Lichtenstein from consulting with them when he saw a need, nor did he feel it should prevent others in our community from doing so.

One reason I am sharing these recollections is that they reflect a perspective that I sense to be increasingly rare, especially in Israel. While – like R. Lichtenstein – I too have strong criticism about the haredi community, this very criticism comes from a sense of sharing a tradition that I care about deeply. But this is not the type of criticism I frequently see around me. Rather, many – including quite a few in R. Lichtenstein’s outer circles, who would cite him as their leader and authority – have no sense of being part of a larger “Torah world.” Not only is it a phrase they would never use, it is a phrase they might not even understand.

As is well known, R. Lichtenstein did not force his opinions and ideology on anyone. But I believe that he saw ideology and identity as two separate things. I don’t think it would necessarily have upset R. Lichtenstein to see his followers arguing more fiercely against haredi positions than he did. But I believe it would have troubled him to think of his followers seeing the haredi world as something completely foreign.

For doing so not only bespeaks an attitude towards the contours of our community – or the world part of the phrase, “Torah world” – but ultimately an attitude towards Torah study and rigorous shemirat ha-mitzvot – the Torah part of that phrase as well. In other words, if Torah is really as central to our lives as we claim, that should – as R. Lichtenstein saw it – automatically create an essential bond with those that share such a vision.

May the memory of our great teacher continue to inspire us and remind us of our essential commitments.