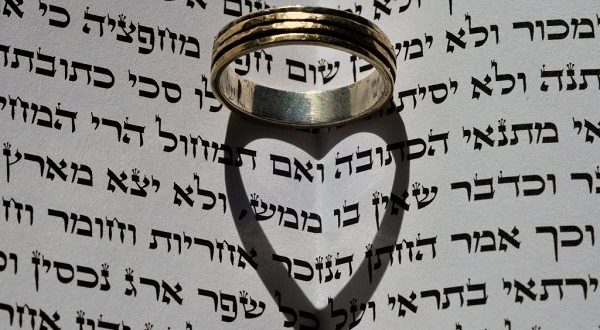 According to halacha, a groom may betroth his bride with anything of value, whether it is money or any other type of gift. [1]Kiddushin 2a. Common custom, however, is to do so by means of a ring. [2]Rema, EH 27:1. A number of explanations have been offered for the now universal custom of using a ring for betrothal at a wedding.

Some suggest that since a ring is worn at all times, it ensures that a woman will constantly be reminded that she is married. [3]Chinuch 552. The circular shape of a ring also alludes to completion, which signifies that she is now whole and complete after having found her bashert — her soulmate. Similarly, the circular shape of a ring also symbolizes the hope for continued love and success as their relationship grows. [4]Beit Chatanim 5 note 27. It is also noted that a ring is often used to combine two separate components together as one — in this case, a husband and wife. [5]Likutei Maharich p.132. It is also a symbol of fidelity. [6]Likutei Maharan 7:1. The giving of a ring is used throughout Scripture to indicate the passing of authority. For example, Pharaoh gave a ring to Yosef to indicate that he was now the authority over Egypt, and Achashverosh gave his ring to Haman and Esther (at different points of time) to indicate that they had authority over the Persian kingdom. So too, a husband gives his wife a ring to indicate that she now has authority over his household. [7]Cited in Made in Heaven p. 49. See there for much more on the symbolism of the wedding ring. Incidentally, the word ring (“taba’at”) has the same gematria as “kiddushin” (betrothal). [8]Tashbetz Katan 467; Sefer Kushiot 251. There are other reasons, as well. [9]Rivevot V’yovlot 2:522.

It seems that the use of a ring in Jewish wedding ceremonies was already widespread in Talmudic times. [10]Tosfot, Kiddushin 9a s.v. v’hilchata. In fact, it might just be that a ring was used in biblical times, as well. [11]Bereishit 38:17; Daat Zkeinim M’baalei Hatosfot, Bereishit 38:18. See also Nechemia 7:46. It is critical that the ring used for the wedding ceremony belong exclusively to the groom and no one else. [12]EH 28:18; Be’er Heitev, EH 28:36; Aruch Hashulchan, EH 28:84. A groom who uses a stolen ring for the wedding, and perhaps even a ring that is not fully paid for, renders the entire ceremony null and void. [13]EH 28:1. It is questionable whether a borrowed ring may be used for this purpose. [14]EH 28:19; Chelkat Mechokek 28:33; Beit Shmuel 28:48; Terumat Hadeshen 210; Maharsham 1:29. All authorities agree that the marriage is invalid if a ring borrowed from a non-Jew was used. [15]Meishiv Davar 2:34.

It is virtually a universal custom to specifically use a gold ring for the wedding ceremony. [16]Mordechai, Kiddushin 488; Minhag Yisrael Torah, EH 26:14. Among the reasons for this is that gold is one the most important and valuable metals in the world. This is intended to remind a man how much he should value his wife. The ring should be made entirely of solid gold and not merely gold-plated. [17]Teshuvot Radbaz 467; Avnei Derech 2:65.  Nevertheless, in some communities, a silver ring is used, as silver is said to represent mercy in kabbalistic literature. [18]Levushei Mordechai 3:274; Ben Ish Chai, Shoftim 8; Minhag Yisrael Torah, EH 26:14. Most wedding rings in the Talmudic era were likely silver ones. [19]Yevamot 31b.

A number of authorities frown on having anything engraved on the ring, at least until after the ceremony. [20]Zecher Simcha 178; Shulchan Ha’ezer 40b; Teshuvot V’hanhagot 2:430 Other authorities dismiss any such concerns. [21]Beit Chatanim, Chapter 8 note 28; Emet L’yakov, Eh 31; Minhag Yisrael Torah, EH 26:14; Rivevot Ephraim 4:223; Kol Yehuda 22; Ben Ish Chai, Shoftim 8. There is also a custom, based on the Zohar, to use a ring that is square on the outside and round on the inside. [22]Tikunei Zohar 5. A groom who simply does not have a ring of his own should betroth his bride with a valuable coin. [23]Shulchan Ha’ezer 8:1:18. See also Chochmat Adam 129:16. The marriage may not be valid in the event that the bride assumed that the ring she was married with is of a certain type of metal but later discovers that it is of a different type of metal. [24]Rambam, Hilchot Ishut 8:1. Similarly, there should be no stones in a wedding ring, as the value of a precious stone is not readily apparent to the layman. Indeed, the bride may be led to believe that the ring is worth more than it really is, thereby possibly invalidating the marriage. [25]Tosfot, Kiddushin 9a s.v. v’hilchata; EH 31:2. See also Sefer Kushiot 7. For an elaborate discussion on this issue see Avnei Derech 6:194.

Common custom is to place the ring on the forefinger of the bride’s right hand. It may be placed upon the left hand if she intends to wear the ring on her left hand throughout her life. [26]Be’er Moshe 2:2. There are a number of reasons for placing the wedding ring on the forefinger. [27]Ben Ish Chai, Yesod Yesharim. One reason is because the use of the forefinger allows the witnesses to better observe the groom placing the ring on the bride’s finger. This ensures that the act of betrothal is not “hidden” between any other fingers. There are several other reasons, as well. [28]Sefer Kushiot 18. Nevertheless, there are those with the custom to place the ring upon the middle finger which is said to correspond to the tefillin strap which is wound around that finger, as well. [29]Kisei Lamelech p.30.

A number of authorities are of the opinion that the ring must be placed directly on the bride’s finger without any interposition whatsoever. Considering that some bridal ensembles include gloves as a fashionable component of the outfit, these gloves may be deemed an unacceptable interposition between the ring and the finger, possibly invalidating the betrothal. [30]Pitchei Teshuva, EH 27:1.

The Divrei Malkiel [31]Divrei Malkiel 5:206. takes issue with the suggestion that gloves are an interposition that may invalidate the betrothal. He notes that although it has become universal practice for a man to betroth his bride with a ring, there is actually no halachic requirement to do so. Indeed, as mentioned, a groom may betroth his bride with money or any object of value, among a number of other methods of betrothal, as well. [32]Kiddush 2a. In fact, there isn’t even a requirement for the object of betrothal to actually be placed in her hand. As such, although he strongly opposes wearing gloves as part of the bridal attire for different reasons, he rules that if the ring was placed on the glove and not directly on her finger, the betrothal is nevertheless valid. [33]See also Aruch Hashulchan, EH 27:4; Ben Ish Chai, Shoftim, and Rivevot Ephraim 8:578; Rivevot V’yovlot 2:181. For centuries, Jewish grooms have been placing the ring directly upon the finger of their brides when marrying. This custom should not be changed due to considerations of modern fashions. [34]Sheilat Shalom 124; Beit David 179.