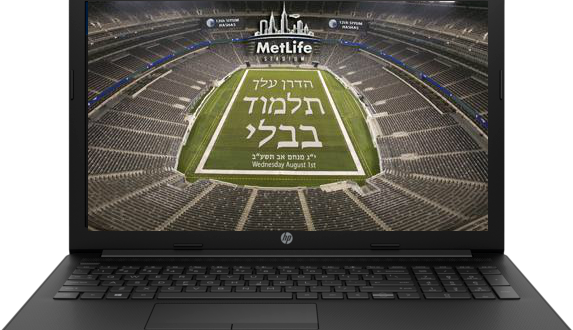 Electronic Participation in a Siyum on Erev Pesach and Related Issues

by R. Asher Bush [1]Adapted by the author from Shu”t Shoel B’Shlomo, T’shuva #34

Twice, the Shulchan Aruch speaks of the obligation of the bechor (firstborn son) to fast on Erev Pesach (called Ta’anis Bechorim) – first in describing the events leading up to Pesach [2]Orach Chaim 429:2 and later in a chapter [3]Orach Chaim 470 devoted solely to this topic. The Tur [4]OC 470 explains that the fast is meant to serve as a reminder of the miracle that on this date the Jewish firstborns were spared while the Egyptian firstborns all perished. Rav Yosef Karo [5]Beis Yosef 470 and Shulchan Aruch quotes those who say that this should also apply to a firstborn woman as well, since women also experienced that miracle as seen in the Midrash which speaks of the special merit by which Batya the daughter of the Pharaoh was spared that night [6]As expressed by the Maharil (Minhagim, Erev Pesach #4) “they too were included in this miracle.” . Nevertheless, the common practice is that only men fall under this obligation to fast [7]Shulchan Aruch 470:1. Mishna Brurah #4 explains the practice since the privileges of the First Born were not accorded to women, so too this obligation was not assumed by women..

However, common practice today is that even men do not fast. Instead, they participate in a siyum which obligates them to eat in celebration rather than fast.

Why doesn’t anybody fast anymore?

Regarding individuals who might have difficulty completing this fast the Mishna Brurah [8]470:2 writes, “it seems that if one has a headache or pain in the eyes that one need not fast. Similarly, it seems that one who has trouble fasting and after the fast will only be able to eat small quantities of light foods, and it is likely that they will not be able to fulfill the mitzvah of eating Matzah, Maror and the Four Cups, for such a person it is better that they not fast in order to perform the mitzvos of the night.” It is very likely that this second category would include many people who generally feel weak and worn out following a long fast, particularly in our generation when Pesach always falls after the return to daylight savings time.

Perhaps surprisingly, the Shulchan Aruch simply records the obligation to fast and does not make any mention of our common practice, namely, the participation in a siyum. The Shulchan Aruch’s approach is consistent with our conduct on other fast days [9]Orach Chaim 559:9. Mishna Brurah (559:35) points out that this not only applies to Tisha B’av but to all of the Four Fasts and to a groom as well. One a practical level the only other day which … Continue reading, where participation in a seudas mitzvah does not exempt one from the fast (so a bris will be done during the day and meal will follow in the evening). The only exception to this is when a fast is postponed from Shabbos to Sunday, in which case the father, mohel and Sandek are permitted to eat at the bris, but the rest of the attendees may not.

Perhaps the most similar case is found in the words of the Ramo [10]Orach Chaim 568:2 regarding those who accept to fast BaHaB (the Monday, Thursday and Monday follow Pesach and Sukkos) or during the days between Rosh HaShana and Yom Kippur. If a bris comes up, they are permitted to eat at that meal (even without hataras nedarim). It is generally understood that this is permitted since these fasts were never accepted in such cases. Assuming that the Ta’anis Bechorim is viewed in a similar way, that would explain the exemption gained by attending a seudas mitzvah [11]It should be noted that others, notably Rav Shlomo Kluger (Dagul Mervavah, Yoreh Deah 214, also quoted in Pischei T’shvua #1) understood this Halacha very differently, namely that an occasional … Continue reading. Still it seems that two significant questions exist that make this comparison less than compelling. First, the two cases mentioned by the Ramo, even though they were commonly practiced, are voluntary fast days based on personal acceptance, unlike the Ta’anis Bechorim which is a binding custom. Additionally, in the cases of the Ramo the fast really still exists and it is only on these special occasions that there will be an exception (and the person will still fast the other days in that series), while in the case of the Ta’anis Bechorim it has been effectively rendered null by artificially scheduling [12]It is striking that in 2019-5779 the Daf Yomi Siyum of Chullin comes out just in time for Erev Pesach, finishing on the night before. a seudas mitzvah each and every Erev Pesach. Accordingly, it should not be surprising that, at least in earlier generations, this practice was not met with universal rabbinic support.

Based on this, the Mishna Brurah [13]470:10 records divergent practices whether a bechor is permitted to partake of a different kind of seudas mitzvah, such as a bris or pidyon haben. He observes that the practice had developed in many communities that a bechor would participate in a siyum, even though he was not making the siyum himself, merely joining in his friend’s celebration. Today, this is the common practice.

The Aruch HaShulchan [14]470:5 records the same practice but questions how it came to be that this obligatory fast has effectively ceased to exist. He suggests that if there is any valid justification for the universal attendance at a siyum in order not to fast, it is based on the fact that between the general difficulty in fasting, the amount of work generally done that day preparing for Pesach and the difficulty eating maror after a fast, the assumption arose that the typical bechor would very likely be unable to fulfill this fast. He added to this the fact that this fast has no source in the Talmud, and the Talmud Yerushalmi seems to indicate that one should not fast, with the earliest source for the fast being in the minor tractate of Maseches Sofrim. The combination of all of these factors, he writes, is likely why the sages did not object to this otherwise unusual practice.

The Pischei T’shuva [15]This is not the Pischei T’shuva printed in the Shulchan Aruch (Yoreh Deah, Choshen Mishpat, Even Ha’ezer) written by Rav Avraham Tzvi Hersh Eisenstatt of Bialystock, it is a separate sefer on … Continue reading takes an even stronger stand on this issue, not only justifying this conduct, but expressing discomfort with the idea of fasting since there are very few people whose Seder will not be negatively impacted by fasting.

Rav Shlomo Kluger [16]Shut Elef L’cha Shlomo, OC # 316 took a similar approach, ruling that if eating during the day will help facilitate the mitzvos that night then it is a mitzvah for a person to not fast. Strikingly, he writes that this would apply even when Erev Pesach falls out on Shabbos and the fast is customarily observed on Thursday. If fasting on Thursday would impinge on one’s ability to do a proper bedikas chametz that evening, one should eat.

Does this fast continue to exist in our days?

Rav Yosef Eliyahu Henkin [17]Quoted by Rav Shimon Eider, Laws of Pesach chapter 17, note 48 was of the opinion that like any other minhag that has fallen out of practice thereby losing its binding nature, so too since this fast is no longer observed, it has ceased to be a binding minhag. For this reason, the rabbis permit the use of a siyum. Had the fast truly been obligatory it would have been necessary to serve a real meal (like a bris or pidyon haben) not just a casual snack as is commonly done. In fact, Rav Henkin went so far as to say that giving tzedaka is likely more important than participation in the siyum and should be done as well.

It should be noted that even though Rav Henkin said that the formal minhag had ceased to exist, he did not assume that there was no reason to fast. Rather it had become a “lesser” minhag, but one that still requires attending to via tzedaka and a siyum [18]As seen in the Ramo at the end of 568:2. This is clearly the common practice today, although not everyone is careful to give tzedaka in addition to participating in a siyum.

Based on this widespread practice of participating in a siyum, the question is often asked, both by those who are infirm [19]As mentioned above, the threshold of illness for exemption from this fast is not very high so it is unlikely that those whose health would prevent attendance would be obligated to fast anyway. and cannot attend, and more commonly by those in transit or at work, whether participation in a siyum necessitates being present or whether a telephone call, skype session or live-streaming would satisfy this requirement.

It is clear from the Poskim [20]Ramo 568:2 in regard to BaHaB, Mishna Brurah 551:73, Yabia Omer 4:42 in regard to eating meat before Tisha B’Av. that participation in a siyum (for purposes of eating meat during the Nine Days) means being present, and sending a portion home to a non-participant would not work. At the same time, Poskim [21]Biur Halacha 551 sv V’siyum and Mishna Brurah #74 in the name of the Chaye Adam. do mention that an attendee need not be part of the learning, as friends and family of the one making the siyum are viewed as participants and permitted to enjoy meat and wine.

Based on this, it would seem that electronic participation does not qualify to permit eating. However, given the understanding of Rav Henkin that the obligation today is of a far lesser level than it had been and the fact that for most people fasting this day would have a significantly negative impact on their ability to properly observe the Seder, I believe that even this minimal level of participation in a siyum (especially when accompanied by tzedaka) would be the best alternative for those who would otherwise be unable to attend in person.

The Use of a Microphone

The Poskim [22]Shut Minchas Shlomo #9, Shut Igros Moshe OC vol. 2 no. 108. There are many sources on this topic but the words of these two leading Poskim of the previous generation present the two sides of the … Continue reading of the late 20th and early 21st centuries debated the use of a microphone to fulfill mitzvos, particularly when there are no issues of doing forbidden melacha on Shabbos or Yom Tov. The primary case where this is discussed is regarding Megilla reading, but also includes a regular shaliach tzibbur or ba’al korei in large or crowded settings such as schools and summer camps. It seems that even Rav Shlomo Zalman Auerbach, who precludes the use of a microphone for any mitzvah which requires hearing, would not impose this limitation when the person making the Siyum spoke to the assembled group over a microphone. This is due to the fact that participation (for those not actually making the siyum) is more about being present than the actual learning. Additionally, the mitzvah of learning Torah does not require a formal act of hearing.

2019-04-15
Asher Bush
Previous: Is It Permissible to Refrain from Vaccinating Children?
Next: Daily Reyd