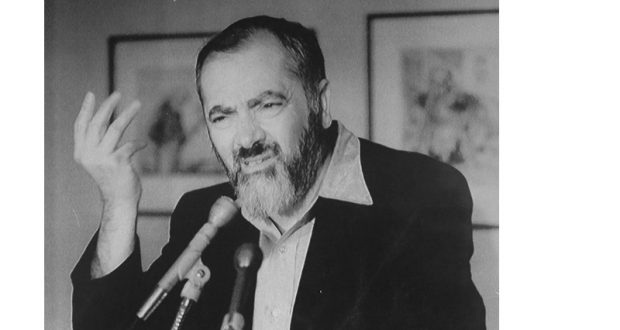 Kahanism is often portrayed as blatant racism. On a purely theoretical level, this is obviously untrue, as we shall see. On a practical level, the ideology may be translated into action in a racist way, or may accompany racism, but that is not our topic. At worst, Kahanism devalues gentiles in a broad, sweeping fashion. Since Judaism is not a race, being non-Jewish is also not a race. Kahanism does not really distinguish between gentile nations or tribes but between gentile behaviors, as we shall see. Those who oppose Kahanism may call it a form of reverse anti-Semitism but not racism.

In Or Ha-Ra’ayon, R. Meir Kahane HY”D highlights the issues of Jews and gentiles as a major theme in his thinking. He believes that the Jews’ chosenness and obligation to be holy requires separation from gentiles and their negative influences (ch. 25). However, this formulation is too simplistic. R. Kahane sees all people in two categories — either followers of God or wicked. We relate positively to God-fearing gentiles who accept the seven Noahide commandments in front of a Jewish court, i.e. those who are classified as a Ger Toshav. But while we respect and accept in our land a Ger Toshav, we still maintain separation from them. Additionally, a Ger Toshav must accept on himself taxes and servitude to the Jewish people.

R. Kahane sees this separation as inherent to creation. “The world consists of gentiles and Jews. All the gentiles are in one group and the Jews are in a second group, removed and separated” (pp. 329-330). Jews must remove themselves, to some degree, even from God-fearing gentiles because their influence will detract from the Jewish striving for divine cleaving.

For R. Kahane, because Israel is the chosen land, only members of the chosen nation has a portion in the land. Only gentiles who are classified as a Ger Toshav may live in Israel, and only if the follow specific rules that limit their cultural influence on Jews. The Torah specifically requires expelling the seven indigenous nations from Israel. R. Kahane quotes, in bold, from the Or Ha-Chaim (Num. 33:52) that this applies to all indigenous people, whether of the seven nations or otherwise. To this, R. Kahane adds: “Any honest and intelligent person, who accepts the yoke of Heaven, knows from simple logic that it is true that the Ishmaelites [Arabs] of our time have the status — regarding living in Israel — of the seven nations” (p. 260). In fact, the Or Ha-Chaim only discusses the biblical conquest of the land. The application to contemporary times is R. Kahane’s extension.

The Ritva (Makkos 9a sv. alma) divides the gentile world into three theological categories: 1) Ger Toshav, who formally accepts the seven Noahide commandments before a Jewish court; 2) Noahide, who follows the minimal commandments on his own; 3) sinner, who fails to fulfill those seven commandments. R. Kahane quotes this Ritva (p. 270) but inexplicably proceeds to ignore the second category and treat every gentile as either a Ger Toshav or a sinner. This is particularly significant because the Talmud (Arakhin 29a) says that we can only accept a Ger Toshav when the jubilee year is observed. Since it is not currently observed, a gentile is unable to become a Ger Toshav due to this technicality. In other words, it emerges from R. Kahane’s analysis that all gentiles must be treated like sinners.

All these conclusions flow from the sources but neglect the attempts to discuss their practical applications throughout the ages. In 2009, a book titled Toras Ha-Melekh was published in Israel. The book applies Kahanist thinking to the halakhic rules of wartime, with serious implications (I discussed the book in July, 2011). In 2010, R. Ariel Finkelstein published a brilliant response titled Derekh Ha-Melekh. Like R. Kahane, the authors of Toras Ha-Melekh conclude that gentiles today do not fall under the Ger Toshav category and therefore are sinners. R. Finkelstein quotes many authorities, Medieval and later, who accept that a gentile in the Ritva’s second category — a decent, moral person who is not an idolator — falls under the category of a Ger Toshav. In particular, R. Avraham Kook (Mishpat Kohen, no. 6) and R. Yitzchak Herzog (Techumin, vol. 2) both adopted this approach.

This is especially true when we consider that nearly all authorities accept that Islam is not considered idolatry and many (if not most) hold that Christianity is not considered idolatry for gentiles. R. Finkelstein (pp. 100-101) adds that the Talmud (Chullin 13b) and subsequent authorities say that gentiles in more civilized times merely inherit idolatrous practices but are not actual idolators. Even those from the Far East who have multiple deities do not qualify as idolators. Therefore, as long as the gentile is willing to live as an Israeli citizen — paying taxes and accepting the government’s authority — he may do so. But even without taking this step, the Ritva offers a middle category of a decent gentile who does not join the Jewish community as a Ger Toshav but remains faithful to God.

If we look at some recent halakhic analyses, we can see how mainstream scholars view these issues. Rav Ya’akov Ariel (Be-Ohalah Shel Torah 1:22) was asked by a female convert whether she could bring her sick, gentile mother to live with her in Israel. Rav Ariel addresses a number of issues, including that of bringing a gentile to live in Israel. Presumably, R. Kahane would forbid this. However, R. Ariel concludes that we may treat the mother as a Ger Toshav and bring her to Israel so her Jewish daughter can care for her.

Rav Ovadiah Yosef (Yechaveh Da’as 6:60) was asked whether a male convert may pray for his sick, gentile father’s health and say the Kaddish prayer after his father’s passing. Rav Yosef quotes Rav Chaim Benveniste (Dina De-Chayei, prohibition 45) who says that Rambam served as a doctor for Muslims because they were not idolators but rather lawful, God-fearing gentiles. Similarly, Rav Yosef Karo (Kessef Mishneh, Hilkhos Avodah Zarah 10:2) deduces from the Rambam that you may heal a gentile who does not worship idolatry even if he is not a Ger Toshav. Based on these and other sources, Rav Yosef concludes that you may pray for a Muslim or Christian person’s health and say Kaddish for his soul. Presumably, R. Kahane would see the gentile father as a sinner for whom one may not pray.

R. Kahane takes standard texts and ideas but applies them with an overly literal approach that neglects the realities of life. Gentiles have no practical place in R. Kahane’s worldview. They are unchosen and unholy, able to live in Israel — but not among Jews — only if they accept Jewish theology. In practice, he sees no role for gentiles in Israel today.

In contrast, the traditional view sees most gentiles as decent religious people. They have a place as loyal citizens of a Jewish state. While we did not discuss the issue here, R. Kahane opposes gentiles serving in Israeli government while R. Eliezer Waldenburg and others see room for gentiles in the Knesset, representing the citizens who elected them.

2019-03-04
Gil Student
Previous: A Problematic Fixing of a Sefer Torah
Next: Books Received