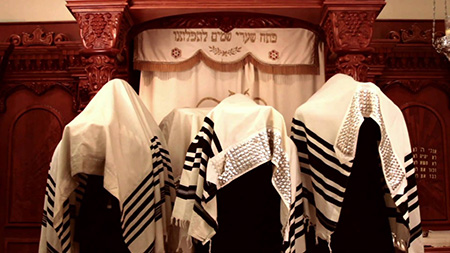 There is an ancient and widespread custom for the Kohanim to chant a tune between each of the three verses of Birkat Kohanim, something that may even pre-date the Talmudic era. [1]Kiddushin 71a. It has even been suggested that the tunes used by the kohanim nowadays originated at Mount Sinai. [2]Siach Yitzchak 73. The singing serves to separate each of the three verses of Birkat Kohanim. It is explained that each verse is actually an independent blessing and it is appropriate to emphasize their distinctness by pausing between each verse with the accompanying singing. [3]Rema, OC 128:45.

It is also taught that the chanting inspires the kohanim and assists them in attaining higher levels of concentration and intention. [4]Aruch Hashulchan, OC 128:35. Indeed, it is taught that song and music are a means for arousing the Divine presence to rest on a person. [5]Melachim II 3:15. It is also a means for putting a person in a good mood. In fact, in order for the Birkat Kohanim to be effective, the kohanim must be in a good mood. It is also noted that singing was an integral part of the daily service in the Beit Hamikdash. [6]Erchin 11a. Singing also plays a role, in general, in assisting prayer to be more readily accepted. [7]Baal Haturim, Devarim 3:23. So too, our sages say that the Divine Presence only rests where there is joy and happiness. [8]Yesodei Yeshurun, Nesiat Kapayim. The kohanim should choose the same tune to sing between each of the verses and not sing a different tune each time. [9]Yesodei Yeshurun, Nesiat Kapayim. See also Ateret Paz 128:61.

Nevertheless, some authorities oppose the custom of singing during Birkat Kohanim. It is argued that the chanting causes the Kohanim to remain with their arms extended unnecessarily longer than required, which can be uncomfortable. It is also argued that both the Kohanim, as well as the congregation, could lose their focus and concentration during the periods of extended chanting. Although the chanting is certainly justified, it should be minimized for these reasons. [10]Aseh Lecha Rav 6:8. In Israel, where Birkat Kohanim is recited every day, there is usually no singing between the verses, though some congregations do so on Yom Tov. In the Diaspora, where Birkat Kohanim is performed only on Yom Tov, the singing is often an elaborate and central feature of the service.

In some congregations, the kohanim don’t sing when Yom Tov and Shabbat coincide. [11]Leket Kemach Hashalem 207.  There is a custom for the Kohanim to also chant between each of the individual words of each verse. While some authorities permit it, most others oppose doing so, arguing that it could lead to confusion and cause the Kohanim to forget which word they are up to. [12]Terumat Hadeshen 26.

There is a somewhat related discussion on the permissibility of singing or chanting a tune in general when interruptions are forbidden. For example, some people sing a tune after washing their hands before bread, while waiting for others to wash. According to a number of authorities, singing a tune at this time is considered to be a forbidden interruption between washing one’s hands and eating the bread. [13]Minchat Yitzchak 7:9. According to this approach, Kohanim should be discouraged from singing during Birkat Kohanim as it too may be considered a forbidden interruption between the preliminary blessing and the conclusion of the Birkat Kohanim. Other authorities argue that a wordless tune is not considered to be an interruption and permit it even when interruptions are otherwise forbidden. [14]Igrot Moshe, OC 3:8; Shevet Halevi 5:16. There is also a view that only extensive singing is considered an interruption, but brief singing to enhance the service is permitted. [15]Magen Avraham 124:14.