The Style of Talmudic Discussions

A recent response of a rabbi in Eretz Yisrael to an apparently random killing of an Arab woman might be misunderstood by the public as a denigration of Rishonim and Acharonim. The Talmud discusses the case of a get written on an eved’s arm. Just like none of the commentators objected to the inhumanity of such an action, the rabbi mentioned above complained that no rabbis seem to be objecting to the killing of the Arab woman. The killing of any innocent person is tragic, but I do not want to address here the issue of how it is discussed in Israel. I wish to respond to the offensive claim about the Rishonim and Acharonim.

For thousands of years, the Talmud’s discussions, arguments and disagreements have helped us to reach halachic conclusions. Throughout the Talmud there are examples that may seem insensitive, outlandish or strange to someone unfamiliar with Talmudic methodology. To avoid this misunderstanding, it is important to properly recognize the purpose of these cases and how to apply them.

In Kesubos, [1]כתובות ד: the Gemara discusses when to begin aveilus over the loss of a family member. R. Eliezer says that mourning begins when the deceased’s body is removed from the house, while R. Yehoshua says that mourning does not begin until the golel is sealed. In the Talmud, the word golel is frequently paired with the word dofek. In several places, Rashi writes that the golel is the coffin’s cover and the dofek refers to the coffin’s sides. Rabbeinu Tam [2]שם תוס׳ ד׳׳ה עד שיסתם הגולל believes that golel and dofek refer to headstones and tombstones, which were used to enclose burial caves and tombs.

Rabbeinu Tam challenges Rashi’s interpretation from multiple texts. Among them is Eiruvin 15b, which states if one erects a golel out of a living being it will not have the halachic status of a golel and will not contract tumah. According to Rashi’s interpretation of golel, the Gemara is discussing the case of a live animal that is used as a coffin cover. This seems to be a ridiculous case. [3]According to Tosfos’ interpretation, if a stone could not be found an animal would be tied down to the place of the grave as a grave marker until a stone would be placed there. Nonetheless, this appears to have been Rashi’s understanding of the Gemara. The Gemara uses uncommon and abstract cases in order to learn from them, to test the boundaries of halacha. For example, in Chulin [4]חולין ע., the Gemara discusses the status of a bechor animal fetus that is transplanted from its mother, who had not previously given birth, to a female that had previously given birth. What is the status of the baby animal? Is the animal a bechor? Tosfos says that this procedure is impossible (although it is very common nowadays); nevertheless, the Gemara discusses it for the important purpose of deriving dinim from even uncommon and theoretical cases.

Another example of such a case is found in Bava Kamma. [5]בבא קמא קא. The Gemara discusses the damages owed if a monkey takes one person’s clothing and places it in his friend’s dye. Despite the fact that it is highly unlikely that a monkey would dye clothing, the Gemara examines the case.

Additionally, these cases can often teach us principles that are not obvious upon first glance but are applicable in many other situations. The Shach [6]Shabbatai ben Meir HaKohen (1621-1662). ש”ך חושן משפט עג:לט writes that if a court case between two Jews falls outside the bounds of explicit halacha then the Beis Din should judge the case following secular laws, dina d’malchusa, rather than Jewish Law. The Chazon Ish [7]R’ Avrohom Yeshaya Karelitz (1878-1953). חזון איש, חושן משפט, ליקוטים טז:א (עמ׳ 464)’ argues that the Shach’s comment is very difficult because there is no reason to make a distinction between a clear and obvious halacha and one that is not explicit. The Chazon Ish furthers his argument by explaining that there is never a case that is not covered within the realm of halacha – although sometimes it takes more work to delve into the laws and apply them properly.

Regarding the Gemara in Gittin [8]גיטין כ: mentioned above, the Gemara discusses what would be the case if one writes a get on the arm of a slave. Does it mean that someone really wrote a get on the arm of an eved?! There is no indication that anyone ever did such a thing! Doing so is ridiculous for many reasons. This theoretical case was discussed in the abstract for the purpose of examining the halachic parameters. In theory, an eved could volunteer himself to allow the wife to be divorced and prevent her from becoming an agunah. Or perhaps an eved liked tattoos and wanted a get tattooed on his arm. In theory that is possible, but more likely this is just an abstract case that is examined for theoretical purposes. The Sages wanted to know the din, what is the law if one wrote a get on an eved? And the law is that if one would write the get on the eved’s arm, then one would have to give the whole eved and cannot cut off his arm.

Additionally, a theoretical discussion does not imply permission. Is one allowed to write a get on an eved? Of course not, the issur of tattooing, kesoves ka’aka, forbids such a thing. However, since it is theoretically possible to attempt such a thing, the Gemara discusses it and the related laws even though it is likely that this is a purely theoretical discussion. Similarly, halachic discussions of real-life situations that we encounter in the Gemara, Shulchan Aruch and responsa should not be mistaken as permission to enter such situations.

Returning to the issue with which we began, we are dealing with such a difficult situation in Eretz Yisrael when we are incessantly being attacked by terrorists. There is no justification for the random killing of civilians, but regarding the surrounding conversation about the laws of Shabbos, the situation dictates that we understand the stress, fear and legitimate anger of citizens who have to deal with this first hand on a daily basis. There is no need to denounce good people who discuss halachic implications after an unfortunate killing, nor to denigrate the Sages over a theoretical halacha.

Rav Hershel Schachter is a rosh yeshiva and rosh kollel at the Rabbi Isaac Elchanan Theological Seminary. In addition to his teaching duties, Rabbi Schachter lectures, writes, and serves as a world renowned decisor of Jewish Law. A prolific author, he has written more than 100 articles, in Hebrew and English, for such scholarly publications as HaPardes, Hadarom, Beth Yitzchak, and Or Hamizrach. Seforim written include Eretz HaTzvi, B'ikvei HaTzon, Ginas Egoz, and Nefesh HaRav, MiPninei HaRav and Divrei HaRav. 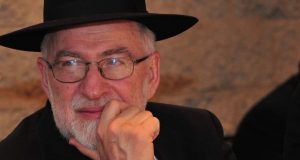