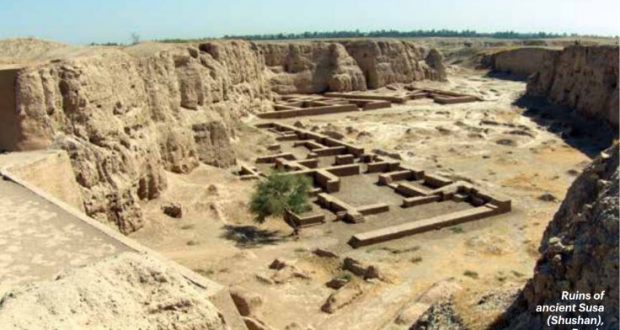 [This responsum is an example of an error I made in gathering responsa for this project: although we tend to treat the second Adar as the “real” one for purposes other than observing a yahrzeit (as my friend R. Shmuel Hain recently pointed out), I grouped Adar responsa from years with only one Adar in the first Adar, I think to be sure we saw them even in years with no second Adar. It makes this responsum’s discussion of Shushan Purim a month early.]

The sixteenth of Adar is two days after Purim in most places in the world, but in Jerusalem and its surroundings, it is the day after Purim.  In 5709 (1949), it was a day to reflect on the first Purim in thousands of years with no Jews in the Old City of Jerusalem. On the fourteenth of Adar in 5709, the Old City was in Jordanian hands; based on a statement in the Talmud Yerushalmi, Mishnah Berurah’s Biur Halachah seems to say once a walled city becomes desolate, surrounding areas (such as the New City of Jerusalem) revert to reading on the fourteenth, like unwalled cities.

Some rabbis thought “desolate” included an expulsion of the Jewish population of the city, as had happened with Jerusalem.  A former Chief Rabbi of Moscow, who had moved to Israel and become a member of the Chief Rabbinate, asked R. Yitzchak Herzog, the Ashkenazic Chief Rabbi of the State of Israel, which day the Jews of Jerusalem should observe, and he published his answer in Shu”t Heichal Yitzchak Orach Chayyim 65.

R. Herzog finds little of halachic interest in the question. First, Biur Halachah does not explicitly speak of being empty of Jews as desolate. The next line does refer to how a Jew who finds himself in a walled city populated by non-Jews should handle himself, which many continued the previous example (that is, desolate meant composed entirely of non-Jews).

However, R. Herzog thinks Biur Halachah intended the two situations as halachically distinct, meaning only a fully depopulated walled city would lead the surrounding areas to revert to reading on the fourteenth. Regardless of Biur Halachah, R. Herzog knew enough other authorities who saw it his way. With their support, he allowed the Jews of Jerusalem to read Megillah on the fifteenth, a ruling they followed for the long nineteen years until Hashem returned the entirety of the city to our control.

I included the responsum here because R. Herzog brought up several other issues I found noteworthy on the way to his conclusion.

A Celebrity Rabbi and Following the Sense of the Jewish People

This question had apparently sparked enough concern for the Chief Rabbinate to convene a special session. R. Herzog mentions to his interlocutor he had planned on looking again at the Biur Halachah’s ruling about an hour before (I assume to have it fresh in his mind), when reporters began to call, and he never had the time. He has now checked again, but I was struck by the image of a country in which the opinion of a rabbi about how to handle Purim was of sufficient public interest for reporters to call incessantly enough to keep him busy.

Without specific sources to guide him during the meeting, he says he had been largely guided by popular practice, as Hillel had, in a story related on Pesachim 66a, where he says “if they [the Jewish people] are not prophets, they are the descendants of prophets.”  Hillel did not remember how to bring a slaughtering knife to the Beit haMikdash when the fourteenth of Nissan occurred on Shabbat. He waited, and the people’s actions reminded him of what he had learned from his teachers, Shemayah and Avtalyon, place the knife somewhere on the animal which would be the Paschal sacrifice.

It’s a daring idea, whose limits need to be explored (some other time). I could imagine mistrusting the judgment of the Jews of Jerusalem as to when to read the Megillah, since most of them didn’t know the Yerushalmi or the Biur Halachah, weren’t halachically sophisticated enough to realize there was an issue.  In addition—and in contrast to Hillel in Pesachim—their situation was novel, had not arisen in centuries.

The two cases open up the question of when we trust the instincts of the Jewish people. Today, for example, most Jews assume it is all right to drive on Shabbat (as we see), but we don’t stop to wonder whether maybe they are right, since we know our sad situation, where most Jews are too ignorant to count as part of what we see as possibly normative popular practice.

We might argue those Jews have moved so far from observance we can no longer trust their instincts, but I could also offer examples of large groups of observant Jews whose instincts still run counter to what God says in the Torah (as I did in my book, We’re Missing the Point: What’s Wrong with the Orthodox Jewish Community and How to Fix It).  Meaning, this clearly valid halachic concept needs clarification and specification. Another time.

Jerusalem is Different, and Where is the Old City?

R. Herzog also says Jerusalem can never lose its status as a walled city, different from other walled cities. He supports his claim with a famous passage in Rambam (Laws of the Chosen House 6;16). Rambam had recorded the accepted idea the rest of Israel lost its sanctity with the destruction of the first Beit HaMikdash (a fact which has halachic ramifications into our times), and then had said the same was not true of Jerusalem.

The sanctity of Jerusalem radiates from the Divine Presence in its midst, which can never be nullified, says Rambam. With the building of the Temple, Jerusalem became the eternal world seat of the Divine Presence, a status never to be lost, altered, or shaken. R. Herzog thinks the idea works for its being a walled city as well.

Finally, R. Herzog notes it was not clear, even that year, the ancient city had no Jews. To read on the fifteenth, a city had to have had a wall in the time of Yehoshua even if it no longer has one.  The walls back then included Mount Zion, according to some views, which was still in Jewish hands in 1949, and, according to centuries-old tradition, areas of the neighborhood we call Meah Shearim. If so, for all the tragedy of having lost what we call the Old City, perhaps parts of that ancient city were still in Jewish hands, negating the whole question.

I close with a sense of joy and thanks that this year—for so many years already and, we can hope, for as long as the world exists– the question has not arisen, because the Old City, New City, and so much else, are again under Jewish control. May we go speedily from the redemption of Purim to the full and complete redemption, with the return of a scion of David to ruling over a unified Jewish people, with a rebuilt Beit HaMikdash, speedily in our days.