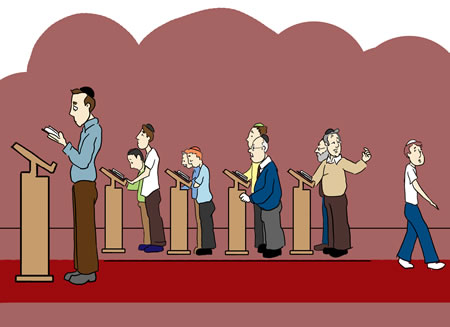 Including Non-Religious Jews in a Minyan, and Its Discontents

11 Shevat: Including Non-Religious Jews in a Minyan, and Its Discontents

On the 11th of Shevat, 5712 (1952), R. Yitzchak Herzog, z”l, the first Ashkenazic Chief Rabbi of the State of Israel, wrote Shu”t Heichal Yitschak Orach Chayim 2, to R. Ib Nathan Bamberger. R. Bamberger was one of the Jews whom local Danes had ferried to Sweden in fishing boats to avoid Nazi deportation and later returned to Copenhagen to serve as a rabbi. He later moved to the United States, served for decades as a rabbi in the Bronx (where I came to know him), and published a book about Danish Jewry (The Viking Jews) as well as one about the Kingsbridge Heights Jewish Center, A Bronx Palace of Torah.

In 1952, in his late twenties, he wrote R. Herzog about the propriety of counting a non-religious Jew towards the ten for a minyan.  A man in the community had bequeathed an endowment for a synagogue in what had been his home. The minyan had dwindled, and the only way to keep it going would be to hire non-religious Jews to fill out the ten.

Are Non-Religious Jews Eligible to Count Towards a Minyan?

To start, there’s real question as to whether non-religious Jews can count towards a minyan. In several contexts, halachah considers those who violate Shabbat in public equivalent to those who worship powers other than Hashem, excluding them from being part of a minyan to engage in public worship.

R. Herzog will agree with the current common view, public Sabbath violation sends a different message today than in Talmudic times. As we watch him reason his way to the conclusion we all assume, we will be reminded it is neither intuitive nor obvious. Halachah might as easily have decided public Shabbat violation excludes a Jew from participation in communal worship.

R Herzog starts with evidence they could not count.  Rambam in Hilchot Ma’aseh haKorbanot 3;4 says the Beit Ha-Mikdash would not accept such a sinner’s sacrifices. A Jew who violated Shabbat publicly would not be able to offer any sacrifices, to atone for other sins or to serve Hashem in some other way.

We often assume prayers substitute for sacrifices, which might lead us to extrapolate Rambam’s rule for sacrifices to prayer. Just as the Temple would reject such a Jew’s sacrifices, we should assume Hashem rejects his prayers, and he therefore cannot be part of a minyan. [Keep reading!]

It’s Not So Easy To Exclude Jews from a Minyan

R. Herzog agrees about Hashem’s rejection of the prayers until such a Jew repents, but does think it blocks the Jew from counting towards a minyan.  He assumes non-religious Jews will be the minority, which means they do not set the minyan’s character, and therefore can count.  Note the assumption, however, which I am not sure we all keep in mind today, the minyan can only include a minority of such Jews. Were they the majority, he implies, the minyan would indeed have a problem.

R. Herzog stresses they are still Jews, and so should count, but again notes evidence to the contrary.  For example, R. Yehudai Gaon ruled no chalitzah (the ceremony to free the widow of a childless man from having to marry one of his brothers) was needed where the only living brother(s) had abandoned Jewish observance. R. Herzog says R. Yehudai Gaon inferred his idea from Biblical verses particular to chalitzah, which does not necessarily contradict the general principle af ‘al pi she-chata, Yisrael hu, a Jew is a Jew, no matter how much s/he sins.

R. Herzog similarly insists each source which characterizes Jews who have abandoned the religion as equivalent to non-Jews as being the result of a specific and limited Biblical statement or rabbinic decision.  For example, R. Herzog insisted the minyan question was unaffected by the authorities who ruled a non-observant Jew’s marriage would be invalid according to Torah law, because the verses which taught them the idea were specific to marriage.

Although We Do Exclude Some Jews

He does note cases where we exclude even mostly observant Jews from a minyan, such as nidui, early-stage excommunication.  To put a person in nidui cut him/her off from the community, to some extent, because those empowered to declare it—Torah scholars and courts—decided certain egregious behavior necessitated public response.

[It’s more rarely used today, since Jews ignore it, either because communities refuse to act on rabbis’ or courts’ rulings, or because the person could exit, the community in question or the religion generally. When it still worked, it was an effective way to enforce communal standards of behavior and participation. Once each individual has full autonomy to decide what s/he thinks is right, we have the situation we have today, bemoaned already in the Book of Judges, everyone does what s/he thinks right, despite the obvious fact most of us have no clue.]

A person in nidui could not join a minyan, a person outside of observance would seem worse. Not so, says R. Herzog says, since nidui aimed to rehabilitate. A Jew who might take communal discipline to heart would be temporarily excluded, to show him/her where s/he had erred, and to encourage improvement and restoration of status (another reason to stop the practice, since so few people experienced it as desired). For the mumar, the Jew who had abandoned religion completely (or who was violating Shabbat in public), rehabilitation was a pipe dream.

R. Herzog then offers what by now have become common lines of reasoning to distinguish between contemporary public Sabbath violation and in Talmudic times.  He starts with Shach in Shulchan ‘Aruch Yoreh Deah 119, where Shulchan ‘Aruch said a Jewish idolater renders non-cooked wine unacceptable for drinking– just as a non-Jewish idolater does. Shach raised the possibility the rule would not apply to someone who worships idols for motives external to the worship itself (such as converting to idolatry for the business connections, or for the jokes).

Similarly, some authorities differentiated Jews for whom public Sabbath violation was a symptom of more general lack of observance (the case in Talmudic times) from those who remain observant in other ways, such as by wearing tefillin daily, praying, and keeping kosher—they violate Shabbat only for what they think of as necessities of business (R. Bamberger’s case).  Other authorities thought if most Jews in a place are nonobservant, public Sabbath violation does not bespeak a rejection of communal standards and therefore does not exclude the Jew from communal participation.

R. Herzog thinks the opprobrium attached to public desecration of Shabbat stems from the Jew’s implied denial of God’s having created the world. Shabbat is an ot, a sign, of faith; where Jews regularly violate Shabbat, an individual’s added violation does not make any obvious statement about faith or its lack, since the Jew is doing what lots of other Jews do.

[I note R. Herzog seems to imply if a Jew were to clearly and explicitly deny Creation, in some sense in six days, as the Torah has it—as I’ve known even Orthodox Jews to do—then, certainly, we would have to treat such a person as a full mumar, even today.]

But Why Include Them?

After working to prove they could be included, R. Herzog does a striking about-face.  Without retracting any of what he had said, he questions the value of keeping a minyan going when it means paying nonobservant Jews to join. He thinks the man who passed away would obviously [a notable word in this context] prefer his funds be used to foster services populated by Torah-observant Jews. He therefore encourages (he calls it a mitzvah) shutting down the minyan and diverting the funds to a stronger shul—including, perhaps, endowing a new set of Torah study classes in the deceased’s memory.

I am struck by his certainty. Based on people I know, I can imagine the deceased being adamant he left his money for a minyan in his house, no matter who attended [Whether or not we agree with the priorities R. Herzog assumed, it’s another matter to be sure the deceased would have been convinced by them]. R. Herzog is not only certain he is right to prefer the established minyan, he is certain the deceased would have agreed. Because, in his view, including a non-observant Jew in a minyan comes with spiritual costs.