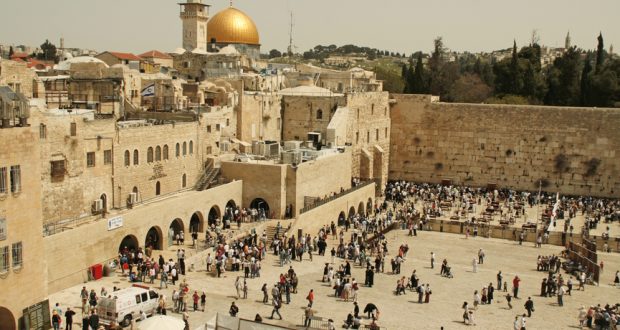 Wedding Pictures at the Kotel

People can mistake sanctity of a place, kedushat makom, for some kind of magical power rather than a venue for closer relationship with Hashem.Shu”t Aseh Lecha Rav 6;43, dated 11 Cheshvan 5745 (1984; it’s unusual for R. Hayyim David Halevy to date his responsa. Usually, he opens with the words, “I received your letter of…”) answers a young woman who had been planning on taking wedding pictures at the Kotel.

She refers to rechavat haKotel, which I always thought meant the area behind the prayer zones, where people gather when they are not praying (and tourists stand to watch the proceedings; later in the responsum, R. Halevy will blur the issue). She seems surprised to have heard from friends who thought taking pictures there was prohibited. She wants to know R. Halevy’s view.

Defining the Sanctity of the Place

To answer, R. Halevy first discusses the sanctity of the courtyard area. He cites Rambam, who differentiated between Jerusalem (the location of the Temple) and the rest of Israel, in Laws of the Beit HaMikdash–literally, of the Selected House— 6;15-16. Jerusalem, as the location of the Shechinah, the Divine Presence, never lost its sanctity when the first Temple was destroyed, as opposed to the rest of Israel, where Rambam held kedusha rishona kidsha le-sha’ata, the first sanctification lasted only temporarily.

[Rambam’s ruling sparked much discussion of how he justified his claim as well as what it means for Israel to lose its sanctity. R. Halevy’s focus is Jerusalem, which did retain its sanctity, so we will stay with him].

In the same section, Rambam quotes Megillah 28a, where a Mishnah says shuls and other sacred spaces remain so after being abandoned or left desolate, based on Vayikra 26;31. [The verse includes the desolation of sacred spaces among the punishments for our national failure to serve Hashem, yet still refers to them as mikdesheichem, your holy places; despite being laid waste, they remain sacred.]

In chapter seven, Rambam codifies the mitzvah obligation to be in awe/fear of the Mikdash, including (in paragraph seven) nowadays, when it is destroyed. A paragraph later, he tells us the geographic extent of the obligation. When the Mikdash still stood, no kalut rosh, levity, was allowed from any place from which the Temple was visible.

Although the Courtyard Is Not the Temple Mount

The rule about levity within sight of the Temple will matter, since no one believes the technical sanctity of the Temple Mount extends beyond the Kotel, the Western Wall (although he does mention those who are careful not to insert their fingers into the cracks of the Kotel, since those spaces might already count as being on the Temple Mount, and we all are teme’ei met, bear the unremoved ritual impurity from contact with corpses).

In addition, Shemot Rabbah 2;2 reads Shir HaShirim 2;9 (hineh zeh ‘omed achar kotleinu, look, there He stands behind our wall) to identify the Western Wall as a site from which the Divine Presence never did or will move.  Other Midrashim speak of an oath by Hashem to protect the Kotel from destruction, since it is where the Divine Presence took up residence once the Temple was destroyed.

Were It Just a Shul

The courtyard of the Kotel, despite having no prayer services, is in direct line of sight of the Kotel; once we know the tradition regarding the Divine Presence, the code of conduct to be expected in the courtyard [and much of the Old City] rises to a higher level of solemnity. Certainly the area is no less than a beit kenesset, a place of prayer, since Jews flock there to pour their hearts before the Divine Presence. (His current line of thought applies only to the section of the plaza where people pray, but his earlier points about being able to see the Temple or the Wall would affect the back parts of the plaza as well).

Nor does the practice to take such pictures in the women’s section alleviate the problem, because the women’s section, too, counts as part of a beit kenesset (since women pray there).  Megillah 28 prohibits eating and drinking, walking for pleasure, or going in to escape the sun and/or rain in any part of a beit kenesset [we today make a condition as we build our synagogues, to allow for multiple uses and purposes of the space. The building of the Kotel had no such condition].

Going Into a Shul

Shulchan Aruch Orach Chayyim 151 codifies Rambam’s additional requirement to enter a beit kenesset (and the Kotel is no less than a beit kenesset) only for a specific mitzvah purpose. There is no such purpose to a bride, groom, and their entourages invade the Kotel for pictures has no mitzvah purpose whatsoever (the opposite, he will explain), so the entry itself is prohibited, let alone the taking of the pictures.

Remarkably, he has a precedent for his claim. R. Chaim Palachi discussed a practice in 19th century Turkey, to bring a bride to the local synagogue on her way to the wedding hall. She would circuit the synagogue, light candles, and the friends and family who joined her would have a small celebration inside the beit kenesset. R. Palachi clearly thought the practice inappropriate, since he suggested ways they could salvage it. Were the bride read some Torah or pray, she could justify her entry into the synagogue; an illiterate bride could sit in the synagogue for a while, since sitting in a place of prayer is itself a mitzvah (I think because the awareness of the sanctity of the place will convey valuable religious messages).

He discouraged it, however, since he thought such excuses for entering a synagogue were only for cases of pressing need, such as needing to communicate with someone already inside. Besides, important authorities objected, thought the ordinary beit kenesset too similar to the Beit HaMikdash to allow workarounds. Only someone whose main purpose was to perform an act of service to Hashem (pray or study Torah) could enter.

Rokeach was reported to have taken the analogy to the Temple another step. He obligated a person who spoke idly in a beit kenesset to atone through forty days of fasts and lashes. Since bi’ah reikanit, entry with no purpose, to the Beit HaMikdash violated a Biblical prohibition, purposeless entry into a beit kenesset incurred a similar punishment.

There was a tradition to have celebratory haircuts (such as a toddler’s first haircut ever) in batei kenesset, which seems to expand the uses of such rooms. A Jerusalem custom allowed a celebration with musical accompaniment and a Jewish barber, on Chol HaMoed Sukkot, in a beit kenesset. The rabbi who discussed the issue permitted it only in outer rooms, which were built with the assumption of alternative purposes, and only because no other location could hold all the people who wanted to attend.

Kapparot, the practice of symbolically transferring one’s sins to a chicken and then slaughtering it to give to the poor, was another use of the side rooms of a beit kenesset for a purpose other than the main one (there, obviously, the people involved meant to act in a mitzvah way).

Sum total, R. Halevy sees little reason to allow a photo shoot at the Kotel, where the photographer will pose people with their backs to the Kotel, and he and others will make light-hearted jokes, with no real reason to have gone there in the first place.

He instead suggests she plan the photos for another location, and go to the Kotel on the day of her wedding before she gets dressed in her gown, to pray to Hashem (Whose Presence resides there, he says) for assistance and success in building a home true to Hashem and His Torah, filled with happiness and blessing.

A much better “use” of the Kotel than as a backdrop for pictures, he says.