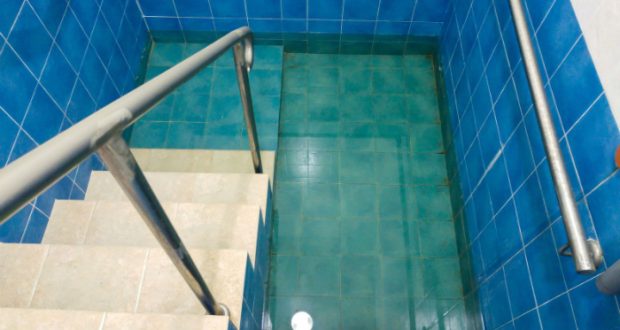 Beit Din At A Conversion Immersion

18 Cheshvan: R. Ovadya Yosef on the Beit Din Being Present for a Conversion Immersion

The final step of conversion to Judaism has the convert immerse in a mikveh (ritual bath), an immersion which must be witnessed by the overseeing rabbinical court. This simple halachic fact presents obvious complications when the convert is a woman.

Shu”t Yabi’a Omer 1; Yoreh De’ah 19, dated 18 Cheshvan 5708 (1947) notes the difficulties. Shulchan Aruch Yoreh De’ah 268;2 requires the judges to see the convert in the water (head above water); have a short discussion about some principles of Judaism, to be sure the convert understands the commitment s/he is making; watch the convert immerse; and only then turn away to give the convert  privacy while leaving the water.

The Difficulties of Seeing Her Immerse

Judges in Egypt (where R. Yosef served as a rabbinical court judge for two years right around the establishment of the State of Israel) had taken to standing in a room next door, having the conversation without actually looking at the woman, trusting the mikveh lady (or any other Jewish woman) that the convert had been in the water and then immersed.

R. Yosef thinks their instincts were correct, because the water in the ritual baths in Egypt were clear where, he assumes, Shulchan ‘Aruch referred to water murky enough to prevent the judges from seeing the woman’s body. Once the water is clear, he is sure no one would think the judges should be in a position to look at her in that state.

Yevamot 47b speaks of judges using a strategy similar to the one R. Yosef was seeing in Egypt, the men being in a side room for the convert’s acceptance of mitzvot and immersion, rather than physically witnessing it.

We allow such tacit knowledge (rather than visual verification) in the case of kiddushei biah, where a man and woman become betrothed through an act of sexual relations. The Talmud enunciates the principle hen hen ‘edei yichud, hen hen ‘edei biah, seeing a couple seclude themselves can count as witnessing the consummation of the relationship. Here, too, we might allow the mikveh lady’s assurances to convince us all had gone as it should.

Yevamot 45b also speaks of a fellow who was mocked for his mother’s problematic conversion. R. Asi wonders why we would worry about her immersion, since the mother (who thought she was Jewish) would have certainly immersed in a mikveh roughly monthly for all her childbearing years. Tosafot questioned the idea, since the immersion for conversion needs a court to witness it. They suggest an immersion known to the world at large can count as if a court was there, which should certainly mean a court actually in the next room is enough.

Not All Good Ideas Work

For all the texts which supported the idea, Rambam required the judges’ physical presence, as did Shulchan ‘Aruch, and became the consensus view. R. Yosef writes “we are obligated to accept with awe the words of our teachers, the earlier ones,” a reminder of halachah’s basic conservatism—with all the many innovations in halachah (including in this responsum), we default to continuing what we’ve been taught.

In a note clearly added much later (since volume five of Iggerot Moshe was not published until 1973), R. Yosef points to R. Moshe Feinstein, who treated the court’s witnessing the immersion as an indispensable condition. R. Feinstein was sure halachah would never set up such a seemingly immodest situation unless absolutely necessary to the process.

Rambam in Laws of Prohibited Relationships 13;9 requires a community to know the identity of a convert’s court, who saw her immerse, before allowing her children to marry Jews.  Despite her and her children’s acting Jewishly for years (and her certainly having immersed in a mikveh to be allowed to resume marital relations with her husband after being a niddah), for the children to be fully Jewish, Rambam requires a court to have seen her immersion.

There is some debate about Shulchan Aruch’s position in a bedi’avad situation, where the immersion has already happened without direct visual confirmation by the court. It matters less for us, since everyone agrees Shulchan Aruch prefers and insists on the court’s seeing the immersion prospectively. R. Ovadya Yosef needs to find a way to have the court watch a woman immerse without it being as immodest and uncomfortable as it sounds.

A previous Egyptian rabbi, Mahar”a b. Sasson, had advocated placing a large opaque cloth on the surface of the water of the mikveh, most of it covering her body, only her head visible (I think he means the convert would stand behind this cloth, which would block the line of sight to anything in the water).

They could have the discussion of mitzvot with her, and then she could immerse in front of them with nothing untoward being seen. It’s not a perfect solution, since the mikveh lady would have to move the cloth a bit, so they could see her immerse [and there would seem to me to be the risk of uncovering something, a risk that’s important as much for whether she feels uncomfortable as for whether anything inappropriate actually occurs].

R. Ovadya Yosef approves of the idea, and since the rabbi claimed to have instituted it in his locale (but was not in practice when R. Yosef arrived), R. Yosef assumes unworthy people had chosen a different (and incorrect) way of handling the situation. He therefore reinstituted it (he uses the phrase hechzarti ‘atarah le-yoshnah, I returned the crown to its old status, a Talmudic phrase praising those who restore good practices which had fallen into disuse for some reason).

He had also improved the idea, by cutting a hole in the middle of the covering, just large enough for her head to come through. The judges will then see her head above the garment and nothing else. All she’ll need to do once they finish their conversation is dip her head, leaving them to see only the back of her head go in the water and then leave, with all modesty concerns addressed.

It was not good enough for some locals, whom R. Yosef speaks of as “modern… wise in their own eyes,” who regard any rabbinic presence in the mikveh as immodest. R. Yosef notes the irony in their comfort with a male doctor—often someone with no particular claim to pristine character—examine women while naked, for the littlest health concern, but object to Torah scholars, who are supposed to, and generally do, develop a chasteness and modesty of character which means they approach conversion with a proper mindset. We obviously and unfortunately know of exceptions, but I think R. Yosef would respond there are exceptions in medicine, too, and yet no one raises the same objections.

R. Yosef convinced the reigning chief rabbi to re-adopt the practice on 18 Cheshvan.

At some point later, R. Yosef tells us he came up with what seems to him a preferable option, to make a special conversion garment, which would be loose enough to let the mikveh water in (and would not cling to her closely, I think he means). Ma’adanei Yom Tov had spoken of immersing in such a dress/ robe, or some kind of a sheet (which, again, he must have meant would not completely cling to the person) for those who have modesty concerns. Ra’avan had spoken of using such clothing in places where the only candidate for immersion (monthly, not just conversion) was the kind of public place where men might come suddenly (such as a river).

Ramban said immersing while dressed was only a bedi’avad option even if the water got through. R. Yosef thinks his situation might qualify, because it will fulfill Mishlei 4;24 (which literally urges us to refrain from speaking perversely or lying, but which R. Yosef is using to mean to avoid giving others any excuse to speak badly of oneself). Since the only options are ones which will fuel snide comments about rabbis or this one, it counts as bedi’avad.

He tells us he had counseled a couple to act this way when they had to move somewhere without a mikveh for business reasons. The wife could go for a dip in the local river wearing any kind of a wide or flowing garment (the important standard is to let water flow onto the whole body, so the water itself reaches her body, not moisture from the garment).

Tosafot Niddah 66b prohibited immersing anywhere men might come by, for fear the woman would rush her immersion. R. Yosef thinks their concern only arose if she is naked, not wearing the kind of clothing he is prescribing.

While he likes his idea better than the Egyptian rabbi’s, since the latter’s ruling had already gained a foothold (and was being successfully reinstituted), he had refrained from pushing for his version (he did know of a rabbi who rejected the idea for fear women would wear clothing which clung to their skin and impeded the water from getting through, but R. Yosef thinks conversion is a process supervised by trained scholars, who would make sure she did not).

What Can Mislead Us

He mentions a story told by R. Uzziel in Shu”t Mishpetei Uzziel, when he was a rabbi in Salonika, where the only mikveh was in the women’s area of a non-Jewish bathhouse. There was no way a rabbinical court could enter, since all the non-Jewish women would object. R. Uzziel therefore allowed the court to walk with her as far as they could, and then trust the women who accompanied the convert to tell them she had properly immersed. (Later in the responsum, r. Yosef mentions having been shown a responsum of R. Shmuel Salant coming to the same conclusion when local regulations make the presence of the court impossible).

R. Yosef is clearly uncomfortable with the ruling even for the she’at ha-dechak, the pressured situation, in which R. Uzziel found himself. More immediately relevant to his circumstances, he wants rabbinical courts to stand up to the “moderns” who are bringing other agendas to bear, such as accusing rabbis of being less modest than doctors.

Rabbinical courts care about modesty as much or more as modern people do, as doctors do, but must also follow the requirements of halachah in having a court oversee the immersion of a non-Jew joining the Jewish people. R. Ovadya Yosef here gave us two ways to meet both desiderata.