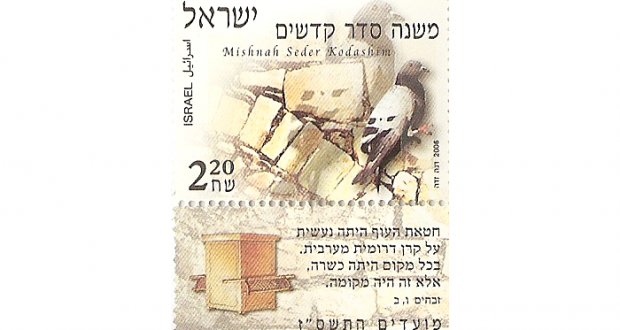 For the sixteen years before he moved to the United States, R. Moshe Feinstein was rabbi in Luban, a town in Belarus, and some of the responsa he wrote in Luban he included in Shu”t Iggerot Moshe (which he started publishing only fifteen years after he arrived in the United States). My impression has been that those responsa tend to focus more on theoretical questions of Torah learning rather than on the practical conclusion of a discussion.

Shu”t Iggerot Moshe Kodashim ve-Taharot 1;12, dated 29 Elul, 5689 (1929) certainly fits that description. It responds to a colleague’s comments on a view of R. Moshe’s never laid out directly in this responsum and which I could not find discussed elsewhere in Iggerot Moshe. Our interest here is the specific issues he raises and rebuts, an opportunity to engage with laws we see too rarely, offering sacrifices, rather than the original question, the halachic status of two people who slaughtered a sacrifice together.

When We Need a Verse to Establish Law

He is first concerned with when we insist on finding a verse to establish laws of how to offer sacrifices. [The Gemara often speaks of the Torah providing a second verse for a particular rule about sacrifices, which tells us the rule is le-‘ikkuva, indispensable, that without this rule being followed, the sacrifice will not be valid].

The questioner thought R. Feinstein’s perspective (which is never stated) was disproved by Yoma 42a. There, Rav inferred from a verse’s use of the word chukkah, a set of laws, that a non-kohen cannot slaughter the Parah Adumah (the red calf whose carcass was burned to provide ashes for mei chatat, the water sprinkled on people to free them of tum’at met, the ritual impurity brought on by contact with a corpse). Were R. Feinstein correct, the verse should have been unnecessary.

R. Feinstein explains why Parah Adumah did need this verse. For most sacrifices, non-kohanim (called zarim, strangers) were allowed to perform the ritual slaughter. Since Parah Adumah was different, the Torah needed to put in the word chukkah,

An Established Tool for Ritual Slaughter

R. Feinstein’s correspondent also questioned him on how we know we need a keli, an item dedicated for use as a tool, to slaughter kodashim (as opposed to an item which happened to come to hand, such as a reed the person found). Tosafot at the beginning of Chullin seemed to require a keli, although not a keli sharet, a vessel or implement set aside for use as part of the Temple service. Kessef Mishneh and Lechem Mishneh thought Tosafot meant that as le-‘ikkuva, an indispensable condition of valid slaughter, despite there being no obvious shanah ‘alav hakatuv, no second verse to set this up as an absolute requirement.

R. Feinstein first suggests no second verse was needed because the requirement of a keli already exists in the realm of kodashim broadly, the activities of sacrificial services. Once a verse told us shechitah, ritual slaughter, was covered by the general rule (which had its own verses), we did not need another one to make it indispensable for shechitah.

We might think to extend this to the ritual slaughter of chullin, ordinary animals, but R. Feinstein thinks rules set up for kodashim apply only to kodashim unless we have evidence to the contrary. True, slaughter is not considered part of the sacrificial service (which is why most sacrifices could be slaughtered by a non-kohen), but this rule seems to include only slaughter of sacrifices. If we’re going to treat slaughter as a sort of adjunct to kodashim, though, we should again need shanah ‘alav le-‘akev, a second verse to make it required.

He points to two answers in Tosafot about the source of the requirement for a keli. Rabbenu Tam, who saw this as a rule taken from the world of kodashim, would indeed concede the need for a second verse, would therefore agree the slaughter would be valid bedi’avad, had it already been done without a keli.

The other answer in Tosafot points to two inferences about the tool used for ritual slaughter, that it must be detached from the ground and must be a keli. The first, less stringent, requirement we apply to chullin as well, which leaves the second rule for kodashim. This turns the conversation into rules of shechitah,some of which apply to all animals, some only to kodashim. But since they are not rules about kodashim specifically, they would not need the second verse to establish it as indispensable.

In his view, in other words (as he himself says), the two views in Tosafot actually differ on a practical matter, whether the need of a keli for slaughtering sacrifices is le-‘ikkuva or not.

The distinction he drew helps him explain Rambam’s ruling, who obligated a keli sharet (an implement dedicated for use as part of Temple service) lechatchillah, but legitimated slaughter even with a non-keli once it already occurred. Rambam’s omission of a middle ground, his failure to require at least akeli even if not a keli sharet, showed R. Feinstein that Rambam saw this as a kodashim issue, where the lack of a second verse matters and makes any rule only lechatchillah, only the way this activity must be done prospectively, but which can be foregone if it had already been done without.

Rabbenu Efrayim did require a keli but not a keli sharet, which R. Feinstein says means he saw this as an issue of shechittah, not rules of kodashim. We do not have the space to go into it fully, but the key piece (to me) is R. Feinstein’s care about whether a rule regarding shechittah of a sacrificial animal counts as a rule about sacrifices (which needs two verses le-‘akev) or about ritual slaughter (which does not).

The letter writer also thought Tosafot contradicted R. Feinstein’s assertion that slaughtering two heifers at the same time counted as mit’asek, where a person acts without sufficient attention to what s/he’s doing. Tosafot derived the impermissibility of such a slaughter from a verse, ve-shachat otah, he shall slaughter it, and not it and its fellow. Rambam held the same.

R. Feinstein first chides him for his inexact reading of Rambam, who cited the same verse for both rules, that the person slaughtering a Parah Adumah may not be involved in any other activity and may not slaughter two such heifers at the same time. The major commentators on mParah 4;4, Rambam, Rash, and Rosh, adduce Sifrei, which says much the same, that we may not slaughter two Parot at once, based on the same verse as the rule against performing other activities while involved in the slaughter of even one Parah.

Rashi and Tosafot, who seem to split the two, are the problem. R. Feinstein thinks they had a different text, since our printed editions of the Gemara have parentheses where the text links this verse to the issue of melachah, performing other activities while slaughtering the Parah. Such parentheses usually mean we should edit out those words, which would leave Rashi and Tosafot without a verse for the idea, would see it as a clear extension of the problem ofheseiach ha-da’at, turning one’s attention away from the service while it’s being performed.

The case of slaughtering two parot at the same time differs, since we would not see it as a distraction or an involvement in some extraneous activity. Without a verse, Tosafot could not define it was a problem (whereas for Rambam, it’s all part of the same verse to begin with).

The last topic R. Feinstein discusses opens a window on his original idea. His correspondent wondered how Rashi would explain the prescription that a second kohen finishes off the ritual slaughter of the tamid, the daily sacrifice, on Yom Kippur. Rashi generally requires proper observance of the laws of shechittah even after a valid shechittah has been performed. Were the slaughterer to slip up—allow a delay, press rather than slice, for two examples—in the later stages of an act of shechittah, it would still invalidate the shechittah (for all that had he just stopped slicing, the act would be over and the animal properly slaughtered).

Applied to the Yom Kippur sacrifice, would the second kohen not constitute a second person slaughtering a sacrifice (which I think we now see was R. Feinstein’s original issue; in a moment, he’ll mention a claim of his in this regard)? R. Feinstein again divides the rules of shechittah from the rules of kodashim—Rashi’s rule applies only to shechittah, so a violation of a rule of kodashim (that two priests may not slaughter the same animal) in the later stage of a slaughter does not bother him.

Even according to his own claim that the no-two-kohen rule is a rule of shechittah, Yom Kippur does not present a problem for another reason. To count as slaughter of a sacrificial animal, the kohen must have intent for doing so. On Yom Kippur, that second kohen does not finish the slaughter as an act of slaughter, he does it to ensure as much blood as possible comes out, which is more like slicing meat than slaughter. True, Rashi would have still seen that as slaughter in the case of an ordinary animal, but only because non-kodesh slaughter calls for a lower level of intent. The act of slicing the animal’s neck, in those cases, always counts as ritual slaughter.

For kodashim, the greater intent requirement lets us see this second kohen as not performing slaughter, but slicing the neck to get more blood for use in the service.

Two sets of laws govern the slaughter of a sacrifice, which bring different requirements of sourcing and intent. To understand the issue that arise requires differentiating carefully which rules are a part of which set, the rules of slaughter or the rules of kodashim. As R. Feinstein made clear to his correspondent of 29 Elul, 5689.