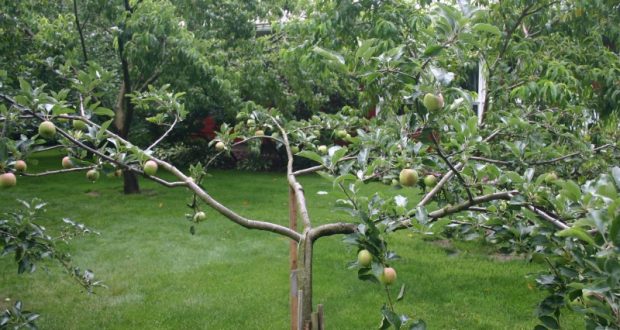 Shu”t Chatam Sofer 2; Yoreh De’ah 287, dated 23 Menachem Av 5575 (1815), shows practical farming questions arose in halachah even before Jews returned to Israel and took up agriculture. The questioner noticed people in his area had a technique for planting ahal or shoshanim (ahal is either aloe or agarwood; shoshanah often refers to roses, although I think contemporary scholars think the Biblical word meant lilies) which seems to pose problems. The farmer would slice an opening in an existing branch of ahal or shoshanah and insert wheat, which helped the plant take root in the ground.

On its face, the practice seems an act of kilayim, planting two different species together, which the Torah prohibits. Yoreh De’ah 295;3 tells us kilayim is a problem regardless of whether the graft affect the produce, and includes vegetables grafted with tree branches in the prohibition. In the next paragraph, Shulchan Aruch said harkavah of kilayim, prohibited grafting, can happen below ground.

Put that all together, the aloe/agarwood/rosebush planting looks to be a problem.

No Rush to Prohibitions

Chatam Sofer instinctively agreed, which was why he had stopped a member of his household from doing exactly that in their garden about two weeks earlier. On the other hand, he was not sure enough of the prohibition to assert it for others.

Shabbat 145b reads Mishlei 7;4 (emor la-chochmah achoti at, say to wisdom, ‘you are my sister’) to tell us to only establish some hitherto unrecognized prohibition if it is as clear to us as the prohibition against siblings engaging in marital relations. Chatam Sofer is not sure enough in our case, because he thinks grafting might only be a problem when both species at some point grow above the ground. In our case, the wheat never grows, it serves only as a rooting agent.

Kiddushin 38a gives him reason to think he has made a valid distinction. Vayikra 19;19 speaks of both animal kilayim—Jews may not not breed different species together—to field kilayim, which prohibits planting fields with different species. The Gemara says the juxtaposition was to stop us from thinking of field kilayim as a land-based obligation; like animal kilayim, it is a chovat ha-guf, a personal obligation, so a Jew may not plant kilayim anywhere in the world.

Chatam Sofer believes the Gemara’s inference teaches us the need for the visibility of both plant species. When animals are bred together, both species are visible, soKiddushin’s insight should mean we require that of the plants as well.

How Far We Take a Chiddush

To me, his readiness to extend a Talmudic idea in ways the Gemara itself did not was already surprising, but he uses his insight to question a comment of Tosafot Yom Tov’s to mKilayim 1;7. In the Mishnah, R. Yehudah allows grafting trees with vegetables. Tosafot Yom Tov attributed the permissibility to the sterility of such mixtures, their not producing any new kind of fruit.

Chatam Sofer cannot accept Tosafot Yom Tov’s reasoning, since R. Yehudah himself prohibits mating other breeds with mules, despite their sterility (to prove mules cannot bear offspring, he cites Megillah 13b, a reminder that some great Torah scholars built their knowledge of the natural world from the Gemara as well). Once the lack of offspring did not matter for animal kilayim, it must also not matter regarding plant grafting, because the verse links them, as Kiddushin 38a said.

[Again, pay attention to what he’s just done—the Gemara linked two ideas in one context, Chatam Sofer assumed it applied to another context, and was so sure he was right, he thought his reading made Tosafot Yom Tov’s idea obviously incorrect in yet a third context.]

He will return to the question of produce in a second, but he first closes this discussion by repeating he was insufficiently certain to say this action was clearly a violation of the Torah.

Smell as a Form of Produce

The questioner also wondered about mixing aromatic trees or plants. Rema to Yoreh De’ah 295;6 allowed grafting ilanei serek, trees without fruit. The usual explanation saw all such trees as one species for kilayim purposes, but perhaps aromatic trees or plants have a discernible enough effect on the world to count as separate species and present kilayim concerns.

Chatam Sofer thought the explanation denied halachah noticed differences among non-fruit-bearing trees, which he proves is untrue. First, the Torah did not limit kilayim to fruit trees, as it did for ‘orlah, the requirement to refrain from using the first three years of a tree’s fruit, or bal tashchit, the prohibition against wasting food. So when the Torah speaks generally of trees regarding kilayim, we should assume it means all trees.

He suggests instead we treat all such trees as one type because of how the Torah referred to their creation. When Hashem calls for the earth to bring forth fruit trees, the verse speaks of ‘etz ‘oseh peri le-mineihu, a tree which makes fruit in its types.  Since the issue of types or species only arose in the context of fruit, non-fruit trees seem not to have types that matter for halachic purposes [which I would think was likely what the people who first advanced the idea meant].

Leniencies in Theory and in Practice

The verse in Bereshit did not speak of aromatic trees as having different minim, types, so they should count as one species for halachic purposes. Chatam Sofer recognizes he’s relying on a particular manuscript version of Yerushalmi, which is why he discourages relying on this idea. Mishlei 22;5 warns one who guards his soul to distance himself from dubitable acts; in our case, since another version of the Yerushalmi would not yield the same insight, he thinks it’s too shaky to use as our support for mixing the trees.

Ramban’s reading of the verses in Bereshit also denies his suggestion. Ramban said every kind of grass has a mazal, a corresponding force/power in Heaven that oversees its growth. Grafting two types of such grasses then mixes Heavenly forces in ways the Torah did not want. Of course, Ramban also thought types of non-fruit trees each have their own mazal and yet we are clearly allowed to graft those together. Chatam Sofer glosses over the problem with the common phrase, ein lanu eisesk ba-nistarot, that we do not involve ourselves in hidden matters.

He’s uncomfortable, in other words, mixing that which we have not done in the past, has a sense this prohibition should apply more broadly than technical halachah seems to, but is not willing to impose that intuition without better proof.

He won’t say not to, but he won’t do it, nor allow members of his household to do it.