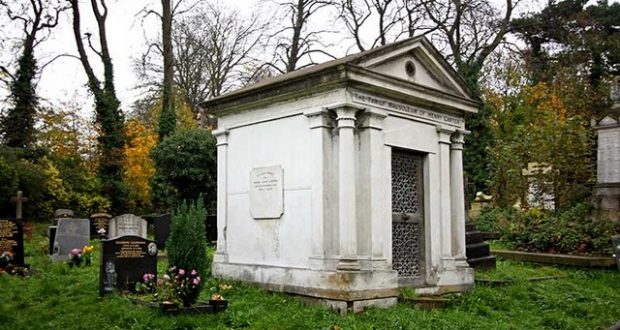 Burial in a Mausoleum

14 Elul: R. Moshe Feinstein on Burial in a Mausoleum

Exile periodically lures Jews to adopt non-Jewish values, and then demand the community respect their right to act on those foreign ways of life. Shu”t Iggerot Moshe Yoreh De’ah 3; 143 and 144 (144 is dated 14 Elul 5732 (1972)), advises the rabbis of Cleveland on how to respond to Jews who wanted their deceased placed in mausoleums in the communal cemetery. R. Feinstein explains why halacahah rejects mausoleums as a burial option, and then lays out parameters of compromises these rabbis can accept, to avoid the litigation the mausoleum-seekers threatened.

Burial in the Ground

Sanhedrin 46b derives the obligation of burial in the ground from Devarim 21;23 (this week’s parsha, as it happens). The verse tells us to bury those put to death by a court, and doubles the verb, ki kavor tikberenu, you shall surely bury him. The Gemara understands the Torah to be telling us a container is not good enough. As Shulchan Aruch Yoreh De’ah 362;1 tells us, failure to bury in the ground also violates the prohibition asserted at the start of the verse, halanat ha-met, leaving a deceased person unburied overnight.

Rambam, Laws of Mourning 4;4, permits burial in cave crypts, which R. Feinstein explains. The space for such crypts was dug out of the wall of the cave, which was then closed up with dirt and stones. Rambam does not object to coffins, and Shulchan Aruch agrees they do not violate halanat ha-met, but explicitly prefers burial directly in the ground, even outside Israel.

[R. Feinstein does not tell us why, but I think the source for direct burial is the last words of the Song in Ha’azinu, ve-chiper admato ‘amo, read as “His land (in the physical sense of the dirt of the Land) will atone for His nation.” As he will discuss below, burial atones. The verse implies Israel has special status in this regard; Shulchan Aruch apparently thinks land outside Israel performs a similar atoning function.]

Coffin or no, and whether in the ground beneath our feet or a dig-out in the side of a cave, all agree the deceased need to be surrounded by dirt and stones.

To understand the reason, we need some background about how tradition saw the atonement which comes with death. Sometimes death itself atones completely, such as those killed unjustly. For those who deserved the death the court imposed on them, death atones most of the way, burial completes it.

Ordinary people, however, gain their fullest atonement only when their corpses decompose. Mausoleum burial hinders the process, delays the atonement the deceased certainly wants (later in the responsum, R. Feinstein notes the deceased is now in the World of Truth, where s/he sees what’s really valuable, which overrides what s/he might have thought while alive).

As a side point, he proactively rejects the idea of helping bodies decompose faster, to hasten their atonement. Rema Yoreh De’ah 363;2 did allow treating a corpse with lye to ease moving a body elsewhere (such as for burial in Israel). We might think faster atonement would be another good reason to treat corpses with lye.

R. Feinstein says we should not, because we should not think we can be wiser than Hashem in how to run the world. Hashem created decomposition at a certain pace, he means, and we should not try to go Him one better.  [This raises an important general question without an unequivocal or universal answer. R. Feinstein certainly agreed we sometimes do try to improve nature, such as with medical treatment. There, the Gemara inferred our right to act from a verse, but we usually assume the right and maybe responsibility to pursue technological advances to ease people’s lives. I’m confident R. Feinstein would have agreed, but would have reminded us of other times our actions would constitute an unseemly attempt to circumvent the world Hashem created. He does not discuss which are which, only says here we are supposed to let nature run its course.]

Suffering of the Deceased

Bodies eventually decompose in mausoleums. R. Feinstein still cannot accept them. He thinks the delay distresses the deceased, who fears final judgment will come before decomposition completes the atonement. We know we are supposed to be sensitive to such presumed worries of the deceased based on a Shach regarding exhuming bodies to move them.

Yoreh De’ah 363;1 gave limited reasons to move bodies, moving the corpse to a family plot, to Israel, or where the original burial was explicitly for a limited time, until the corpse could be moved to a more permanent spot. Shach explained the problem: when exhumed, the deceased fears s/he’s being called to final judgment, and we may not cause such fear unnecessarily.

R. Feinstein extrapolates from halachah’s proscription of causing the momentary fear of being taken for final judgment (quickly assuaged when the deceased realizes the truth), for what might seem good reasons, such as to bury in a more honorable location, to the less justifiable longer anguish over the delayed atonement of a slower decomposition.

He urges the rabbis to publicize the problem with mausoleum burial, the suffering caused to the deceased, to as many Jews as possible. The issue also forces us to weigh the balance of the rights of individuals and the needs of the community. A cemetery which allows a mausoleum condones mistreatment of the dead, from the halachic perspective; for anyone else to allow him/herself to be buried in such a place disgraces them as well. Should the mausoleum be allowed to stand, more traditional Jews would have to feel uncomfortable being buried there.

R. Feinstein infers this from Rava’s statement, Megillah 26b, we should bury a Torah scroll which has become unusable near a Torah scholar. Burying near people and items of mitzvah is a value, being buried near those who go the other way is the opposite, and people would be well-advised to refrain. [Another broad issue people forget. When others violate halachic rules or values, joining or participating with them is itself often a problem.]

How to Avoid a Lawsuit

The next responsum in the volume discusses acceptable compromises with the people who are taking the communal cemetery to court to secure their right to mausoleum burial. R. Feinstein agrees it’s better to settle because we can never be sure how non-Jewish courts will rule, especially when a sole judge will hear the case.

[It’s a throwaway line, but a too-little-noticed flaw in many court systems—halachah does allow for a yachid mumcheh, an expert individual, but discourages it. Cases were generally to be heard by three judges, ensuring a multiplicity of views. No number of judges guarantees a correct outcome, but more voices give more of a likelihood the best answer will be found].

The suggested settlement would split the cemetery into two, with a wall between them. The Cleveland rabbis were unsure they were allowed to sell part of a cemetery, since cemeteries are places of kedushah, sanctity, where Megillah 29a prohibits levity.

In addition, they worried selling to such Jews constituted lifnei ‘iver, leading others to sin, because they would be facilitating mausoleum burial. R. Feinstein says it’s at most lifnei de-lifnei, two stages removed from facilitation, since they are selling ground which can be used appropriately. The choice is still open to these other Jews, and halachah does not require Jews to avoid lifnei de-lifnei.

A Fuller Truth About Mausoleums

Once he’s trying to allow the sale, R. Feinstein mentions reasons a mausoleum is not as bad as he’s portrayed it until now. The mausoleum is constructed of stone, bricks, and cement, all attached to the ground, which might mean such burial does not completely violate halanat ha-met, although it certainly does not fulfill kabor tikberenu, proper burial. Rashi to Sanhedrin 47b mentioned a kever shel banyan, a grave in a building, as did Yoreh De’ah 364;1.

R. Feinstein is certain these sources only accept such a burial in a she’at ha-dechak, when no other options exist, especially since it’s liable to fall down over time. Mausoleums are worse, because they are constructed to make it possible to open the coffin, if viewers wish, and to delay decomposition (as we discussed above). The biggest issue, I think, is what he says next, those who bury in mausoleums know they are changing Jewish custom, and do it to mimic wealthy non-Jews.

Two elements make such a practice itself an unacceptable denigration of the dead. First, mausoleum burial flaunts this family’s greater wealth. The deceased, now in the World of Truth which disapproves of such ostentation, will be embarrassed (regardless of how s/he might have acted while alive). Second, the family shows its unconcern with Torah values; they are the arbiters of right and wrong, as if halachah had nothing to say.

Nonetheless, it’s not enough of a violation to qualify as direct lifnei ‘iver, leaving open the option of selling them part of the cemetery.

What Must Be Avoided

He stresses again his overriding reason for agreeing, fear of what a trial and verdict would produce, given his distrust of judges’ sensibilities. He thinks the two cemeteries need only a symbolic wall, ten tefachim (a little under three feet). However, he insisted the traditional cemetery construct its own entrance and road, was unwilling to have the Jews coming to this one have to pass through the other one, which required walking through the mausoleum. They should not have to participate in a deviation from Jewish practice and custom every time they enter a cemetery.

Some of the complications when one set of Jews come to accept a practice other Jews are certain violates halachah.