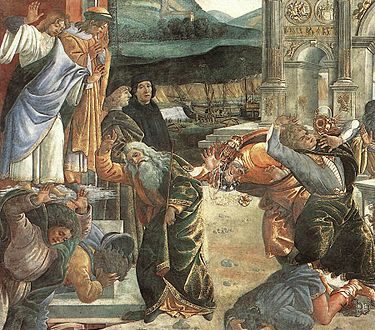 The rebellion of Korach and ensuing events take up most of Pinchas. Since the rebellion itself has garnered much valuable and insightful discussion, I have chosen places where Ramban discussed ancillary aspects, to tread ground not overly overrun with others’ steps.

Korach and his group issue their challenge to both Moshe and Aharon, but 16;4 says Moshe heard them and fell on his face.  Ramban thinks Aharon purposely did not respond, an example of his elevated character and sanctity.

Since he was an interested party, any defense he gave for his right to his status would have necessarily sounded self-serving. His silence conveyed an admission of Korach and his group’s greatness, of the legitimacy of their view that all apparent measuring sticks should have put them in the High Priest’s role, of his having taken the position only because Moshe told him Hashem commanded it.

[Ramban does not make clear whether he thinks Aharon believed he was less worthy than they, or stayed silent to avoid giving any other impression. I raise the question because it impacts the version of humility we are best advised to cultivate: I can easily imagine Aharon properly being daunted by the prospect of serving as Kohen Gadol, should have seen himself as unworthy, since no human being should fool him/herself into thinking s/he is worthy of standing as the people’s representative for atonement from Hashem nor as Hashem’s representative to the people. Unless Hashem designates him.

But does humility require us to see others as more suited for a particular task when they’re not? Does Ramban think Korach and his people actually were more worthy, seen only through human eyes? Or does he think humility led Aharon to a false conclusion? He does not say, but I find that version of humility difficult to understand.

Ramban’s idea about Aharon’s silence reminds me of Aharon’s praised silence after Hashem kills Nadav and Avihu. Ramban does not relate the two, but there seems to be a dvar Torah there, an illuminating insight into the power of holding back from speaking].

When Hashem tells Moshe and Aharon to separate from the congregation, Ramban wonders why the people as a whole were at risk, since they had not joined Korach and his party. Two parts of his answer particularly appeal to me. First, the people originally were firmly on Moshe’s side, but Korach told them he was fighting on their behalf, working to restore the service to the bechorim, the first-born.

Once they saw their stake in his side, they joined him.

(I know I said I’d highlight two points, but let me briefly throw in Ramban’s assigning capital liability to the people for agreeing with Korach, which counted as being meharher acharei rabam, questioning their teacher).

Because Moshe nonetheless intervenes on the people’s behalf, Ramban broadens his perspective to others who did so, such as David, who took responsibility for the idea to count the people (which led to a plague).  Ramban himself refuses to let the people off the hook, because they could have insisted on being counted the right way, by giving shekalim.

More, Ramban thinks the plague really punished them for their centuries’ long indifference to building the Beit HaMikdash. David was forbidden from doing so when he had the idea, but Ramban thinks it could have been built in the time of the Judges or of Shaul. The people showed no interest, so it did not get done, and then had to wait for Shelomo. The plague which we know to be a reaction to their being counted actually also punished their laxity.

In both instances, Ramban sees liability where the verse does not make it explicit, in the one for joining an unjust cause, in the other for failing to take on an important task.

After Korach’s crew are burned by the fire from the machtot (fire-pans) they offered, Hashem (Bamidbar 17;2, although non-Jewish translations continue chapter sixteen until the story of Aharon’s staff) has Moshe tell El’azar to take those pans for the Mishkan, ki kadeshu, for they have become sanctified.

Rashi thought the “sanctity” stemmed from their having become klei sharet, items used in a service to Hashem, and thus were assurim be-hana’ah, prohibited for others’ benefit. Ramban disagrees, since each of the aspects of this event disqualified it from creating a kli sharet—the people offering the incense were not priests, they were doing so outside the Mishkan, and it was only offering incense, not a sacrifice.

Ramban’s first answer shows how Rashi’s view could work, in a way which tells us much about how sanctity happens, as well as about how we can delude ourselves. First, since Hashem commanded them to bring these pans, they become items of kedushah (while ordinarily a non-kohen’s incense pan has no special sanctity, one offered in obedience to a divine command does).

More, the people involved dedicated the pans le-shem Shamayim, for the sake of Heaven, since they thought Hashem would answer them with fire, the pans would in fact become items of service, forever. In the face of Moshe’s denials, even as they followed his orders about how to settle the dispute, they were so sure they were right, they expected the pans to become vehicles for Heavenly fire, and then take their place among the items of the Mishkan. I am repeatedly sobered by such comments, warnings to all of us to step carefully and hesitantly, to be always aware of the powers of self-deception.

The Value of an Education

Teaching the Jewish people a lesson, even if unfortunately through the sin and death of other people, sanctifies items as well. Ramban does not specifically invoke kiddush Hashem, but the points seem related: the challengers to Aharon offered their pans, and Hashem used them as vehicles of reminder for the rest of the people, a sign to them of how they may and may not worship Hashem.

Learning the lesson of proper service (as we are also taught by people who act ‘al kiddush Hashem, who act in ways that sanctify the Name, including giving their lives) creates kedushah, as with these incense-pans.

Sacrifices in the Holy of Holies

In chapter eighteen, Hashem informs Aharon of gifts he and his descendants will receive from the Jewish people, among them certain parts of some sacrifices. In 18;10, Hashem says to eat those “be-kodesh hakodashim,” which Rashi reads as telling us they had to eat the gifts in the ‘Azarah, the courtyard of the Temple.

Ramban dislikes the reading, since the courtyard is not in fact kodesh hakodashim, the Holy of Holies, and Vayikra 6;19 specifically speaks of eating these parts of sacrifices in a makom kadosh, a sanctified place, but not kodesh kodashim, the most holy place. No one ate or drank in the Holy of Holies, where the Aron sat, and it was in fact entered only once a year, when the Kohen Gadol performed the Yom Kippur service.

R. Yehudah b. Beteira partially addressed the issue in Sifrei. He inferred from our verse the permissibility of eating sacrifices within the building of the Beit HaMikdash should there be no alternative (he offered the example of non-Jews having surrounded the Temple. While he obviously sought an extreme to illustrate a theoretical situation, his idea presents a remarkable image: non-Jews surround the Temple, to conquer or destroy it, and kohanim will still seek a place to eat their parts of the sacrifices!].

For his point to work best, Ramban notes, R. Yehudah b. Beteira should have said even when non-Jews are already in the Heichal, the first room of the Beit HaMikdash, kohanim could eat in the Holy of Holies. Which would make the image even starker, kohanim working to eat sacrifices properly as non-Jews advance into the building itself!

Sanctity of Place or Body

Without disagreeing with Sifrei, Ramban thinks the words literally speak of a kind of sanctity rather than a specific place of it. “Kodesh kodashim” tells the kohanim to treat these sacrifices with the highest form of kedushah (which have been laid out elsewhere).

He justifies his claim by interrogating the meaning of the letter bet in the phrase “be-kodesh hakodashim.” While it does most often translate as “in,” which would mean they were being commanded to eat their gifts in a certain place, the bet can also indicate “in the manner of,” as in Bereshit 3;17, be-‘itzavon tochalena, in sadness shall you eat it (Hashem’s words to Adam after the Fall, about the bread he would work hard to reap).

Here, too, be-kodesh hakodashim means “in the most holy way” you would eat sacrifices.

Verse twenty of chapter eighteen tells the priests they may not take nachalah, a portion of land, in Israel (The doubling of the verse—the kohanim not to take nachalah nor to have any chelek, part, warns against any share, however small, says Ramban).  Of course, they did have part of the Land, since they (and the broader tribe of Levi, who receive a similar warning in verse twenty-four) were given the cities of refuge.

Those cities were given to the Levi’im for the benefit of the rest of the people, however. He seems to mean the cities were not really the Levites’, since they were for haven for unwitting murderers.  He phrasing equates all forty-eight cities, where halachah differentiates between the six designated as ‘arei miklat, cities of refuge, and the forty-two ‘arei Levi’im, cities of Levites.

However he would have resolved the issue, he then quotes Sifrei (Korach 45), which doubles down on the general point. Sifrei takes the word chelek in the verse, any part of Israel, to add a prohibition against kohanim taking bizah, spoils of war. The verse’s conclusion, “Ani chelkecha  ve-nachalatecha, I am your share and your inheritance,” reminds Sifrei of “’al shulchani atah ochel, you eat at My table.”

I am a Levi, as it happens, so the idea strikes me each time I see it. The tribe set aside to serve/represent Hashem was removed from ordinary life, the ordinary life which had been the focus of Hashem’s promises to Avraham, Yitzchak, and Ya’akov. Unless we see Hashem as having promised them the unimportant, which seems odd, the Torah seems to set this tribe on a different path. Not better or more ideal, different, to weave a specific section of the tapestry of the Jewish people.