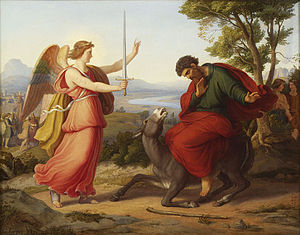 Bil’am Brings the Supernatural to the Fore

[Parshat Balak is unusual in its largely taking place outside the purview of the Jewish people. Unless the Moabite women they slept with told them (or they read about it in the Torah), the Jewish people would never have known what happened between Balak and Bil’am.

To me, it’s a reminder of how we little we know about which events really matter to our futures. It also makes the people’s failure at the end of the parsha sadder—here Hashem has just helped them avoid Bil’am’s curses, and they cannot resist the enticements of the Moabite women, first physical but then expanding into the idolatrous).

Donkeys Do Not See Angels

Bil’am accedes to Balak’s invitation to curse the Jews happily, as soon as Hashem gives what Bil’am should have known was grudging permission.

When he goes despite the signals not to, Hashem sends a sword-wielding angel to block his way. Verse 22;23 tells us Bil’am’s donkey saw the angel (and turned away).

Ramban rejects the literal text, since angels are completely nonphysical, and therefore fully inaccessible to a donkey’s senses. When a prophet or other people “see” angels in Scripture, Ramban thinks their intellects perceive the angel, literally impossible for an animal to achieve.

The verse must mean the donkey sensed a presence, like Kohelet (1;16) said he had seen much wisdom and knowledge. Just as no one sees wisdom, they perceive it, Ramban thinks the donkey sensed a threatening presence (the sword as well as the angel; Ramban says she had the fear she would have were she to see a person or animal coming to kill her).

Otherwise, when Hashem finally opened the donkey’s mouth, verse thirty, the donkey should have said, “there’s an angel, right there, that’s why I’ve been acting this way!” Instead, the donkey says, “is this how I’ve ever acted before?” Because the donkey herself did not know.

Ramban thinks the episode was to remind Bil’am Hashem is the source of voice (the donkey speaks) and can obviously silence whomsoever Hashem chooses. To help Bil’am keep in mind—although he seems to have missed it—he will not be saying anything other than what Hashem wants.

In his second speech, 23;23, Bil’am says “ki lo nachash be-Ya’akov ve-lo kesem be-Yisra’el, no spells can affect Ya’akov nor sorcery on Israel.” Ramban thinks Hashem is having Bil’am point out to Balak the error in having sent for him, since Bil’am’s whole métier is sorcerer, to which the Jewish people are immune. Precisely how Bil’am helped others is impossible for him to do for Balak, since the Jewish people are directly and solely governed by Hashem.

We’ve seen his perspective before, but since he deems it worth repeating, we will as well: for Ramban, as a matter of physics and metaphysics, most of the world is governed by subordinate forces (not, chas ve-shalom, in any way which excludes Hashem, or permits worshipping those forces). In all areas where that’s true, sorcery can have actual impact. It was not a mistake to think Bil’am helped certain nations win wars, because he did.

The mistake was thinking any of his previous successes implied any power regarding the Jewish people, who are always under the direct, unmediated Providence of Hashem.

Telling the Future as a Form of Counsel

After Bil’am realizes Hashem will not be letting him curse the Jews, he tells Balak (24;14) lecha i’atzecha what the Jews will do to you at the end of days. I’atzechacomes from the root of ‘etzah, which seems to mean he plans to dispense advice. Except his topic is the End of Days, when there’s not much Balak can do about it anymore.

Ramban thinks Bil’am means he is going to tell Balak of Hashem’s decisions about the future (‘etzah in the sense of Hashem having “taken counsel.” as it were, and decided on the best course of action for the Jewish people at the end of history). To be told of someone else’s ‘etzah is to be a no’atz, one who has received counsel, says Ramban. [He does not go further, but I think means Balak should be better advised on how to conduct himself and his people’s lives, knowing the necessary direction of history. If we’ve never been told where history is headed, we can plead ignorance when we turn out to be on the wrong side of it; when we’re told ahead of time and decide to act counter to it, we’ve set the petard by which we will be hoisted].

Progressing Further Into the Future

In the continuation of his comment, Ramban tells us these words of Bil’am’s address the days of Mashiach. In his reading, each of Bil’am’s prophecies moved a step forward in time. The first referred to the Jews as chelek Hashem ve-nachalato, Hashem’s share and inheritance (he does not give the exact meaning of the phrase fromHa’azinu, but he means to say Bil’am’s first speech describes the Jews as they are right then, a people in whom Hashem is invested, as it were, forestalling his ability to curse them).

Bil’am’s second speech spoke of the Jews’ upcoming conquest, how they would kill all the land’s mighty kings (he again does not cite specific verses). The third envisioned the Jews’ residence in the land, fruitfully and successfully, their appointing a king to defeat the Amalekites (personified by their king, Agag), and then of David and his successes.

Now, in the fourth prophecy, Bil’am sees Messianic times, which is why he stresses the distance of the vision, er’enu ve-lo ‘atah, I see and not for now, different from the previous prophecies. [Ramban does not explain why the first three would discuss eras of history relatively close to Bil’am’s own time and then jump all the way to Mashiach. The easiest option is this was the last speech, so Hashem conveyed the most important information.

Alternatively (perhaps additionally), after the start of Davidic kingship, the next important marker of history is the eventual arrival of Mashiach. All the rest is a winding path to where we could and should have gotten long ago.]

When the Jews are seduced by the Moabite women, Hashem tells Moshe (25;5) to have the leaders each kill their men. Rashi says there were tens of thousands of “leaders,” i.e. judges. Yerushalmi Sanhedrin 10;2 largely echoes Rashi, and puts the number of those killed at over 150,000 (judges of tens, fifties, hundreds, and thousands, means there were over 75,000 judges).

Aside from the sudden population growth those numbers imply (since, after this incident, there are still around 600,000 Jewish men), Ramban does not think the text indicates such a large amount of death (although he will come back to the Yerushalmi, to suggest a possible reading, an example of his dedication to the meaningfulness of  Rabbinic texts).

He prefers to read verse five as a way to mitigate verse three, where the Torah tells us Hashem’s wrath waxed against the Jewish people for their worship of Pe’or. To save them from the Divinely administered plague they deserved, Hashem in His mercy tells Moshe to have the judges try those who tipped over into worship, kill them for their idolatry, and hang them.

[We can forget the important point: Hashem’s justice administered as plague spills over to affect people not implicated by the original sin. Ramban does not discuss why Hashem chose to operate that way.] He does reminds us we might not always recognize the more compassionate path: in this instance, courts’ trying and killing tens of thousands of criminals would save many others who might find themselves sick and dying with plague.

The tribe of Shim’on got in the way. In Ramban’s reading, the judges were starting on their mission, the people were gathered around the Mishkan for the first trials (with the plague still raging), when Zimri stepped forward to challenge Moshe. Ramban tells us Zimra was a great leader, had many to help him. Like Korach, Zimri reminds us Moshe Rabbeinu had to cope with other power centers among the people!

Nor was Zimri the sole initiator. Sanhedrin 82a thinks his tribe egged him on, accusing him of watching passively as they were being judged and killed.

Ramban’s reading enriches our understanding of why Moshe and the people cried in reaction to Zimri’s challenge. They had hoped to stop the plague by following Hashem’s command, and here was Zimri getting in the way. All he could see was Jews being killed and he saving them, when the judges and others they knew he had just doomed many more, guilty and not, to death by plague!

Pinchas’ zealotry saved the day, and stopped the plague. Ramban infers the effect of killing Zimri from Hashem’s saying Pinchas had removed Hashem’s wrath, which is what the court trials were said to accomplish.

But Yerushalmi said 150,000+ Jews were killed! Ramban thinks the number tells us how many sinners deserved to be killed, and who were later killed by Hashem before the Jews’ crossed the Jordan (since Devarim 4;3-4 says Hashem had destroyed from the people’s midst anyone who followed Pe’or).

If so, how did Pinchas help? Ramban does not say it explicitly, but I think he wants us to understand only the Pe’or worshippers got killed later by Hashem; because of Pinchas, Hashem chose a more targeted way of removing those evildoers from among the people.

We start with Balak and Bil’am trying to force Hashem’s hand, and end with Pinchas helping Hashem bring only the necessary justice and punishment to the world.