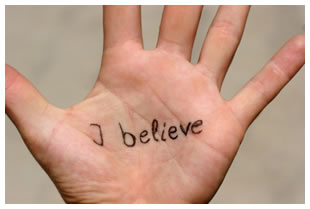 Posted by: Gil Student in From The Hashkafah Files, Magazine, Musings, Posts Mar 19, 18 0

I. Belief and Knowledge

Pesach is often called Chag Ha-Emunah, the holiday of faith or, more accurately, belief. But what is belief and how do we acquire it? A better understanding of belief can help us recognize its role in today’s complex world. Our starting point is a debate among Arabic translators with surprising implications.

The Rambam seems to contradict himself about the nature of belief. In Sefer Ha-Mitzvos (Aseh, no. 1), he writes that we are commanded to believe in God’s existence. However, in Mishneh Torah (Hilkhos Yesodei Ha-Torah 1:1), Rambam writes that we are commanded to know that God exists. Is the commandment to know it or to believe it? Many commentaries have attempted to explain this difference in wording.

However, Rav Chaim Heller, in his 1914 translation of Sefer Ha-Mitzvos into Hebrew from its original Judeo-Arabic (p. 13a, n. 1), points out that the Arabic word the Rambam uses (“itakad”) can be translated as either “believe” or “know”. The original translator chose “believe” but perhaps it can be translated as “know,” resolving the apparent contradiction. Rav Heller quotes a professor from Berlin who pointed out to him that the original Arabic name of Rav Sa’adia Ga’on’s Emunos Ve-Dei’os, which literally translated means “Beliefs and Opinions,” uses “itakad” for the first word in the title — implying knowledge and not beliefs.

Rav Yosef Kafach, the great Yemenite-Israeli translator and commentator, addresses this issue in many places. He consistently writes that “itakad” means knowledge and not belief (for example, see his 1994 Hebrew-Arabic edition of Sefer Ha-Mitzvos, p. 58 n. 1). Rav Shlomo Aviner (Commentary to Moreh Nevukhim, 1:50 n. 2, vol. 2 p. 10) explains that Rambam uses a different Arabic word for belief which does not mean a conclusion of a thought process but rather a feeling of confidence that something is true. Knowledge is the result of a cognitive process, of deducing, seeing or otherwise acquiring information. Belief comes intuitively, also confident but arriving from a different source.

Another great translator and commentator of the Rambam disagrees. Rav Yitzchak Shilat, in his edition of Iggeros Ha-Rambam (vol. 2, p. 479 note to line 1), argues that the Rambam does not distinguish between belief and knowledge. Belief is a form of knowledge. In his letter on astrology, which he strongly opposes, Rambam writes that knowledge comes from three sources — logical proofs, sensory perception (seeing, hearing, etc.) and tradition “from the prophets and the righteous.” Rambam classifies an idea transmitted through the generations — belief — as knowledge. [1]Rav Shilat argues this at greater length in his 2011 book, Bein Ha-Kuzari La-Rambam, ch. 1 sec. 3.

According to Rav Shilat, Rambam holds that belief and knowledge are the same thing. Therefore, there is no contradiction between the language in Sefer Ha-Mitzvos and Mishneh Torah about the mitzvah to believe in God. We must know that God exists, whether we know it through logical proofs or tradition. What people often call simple faith is really belief through tradition. It is a belief taught by parents and teachers to a child and retained throughout life. According to this understanding of the Rambam, the simple belief of pious people throughout the generations counts as knowledge.

Which is better, simple faith or sophisticated knowledge? The Sefer Ha-Chinukh (no. 25) says that knowledge is greater than belief. While you fulfill the mitzvah by believing in God, you reach a higher level (mitzvah min ha-muvchar) by proving it philosophically. The Kuzari (2:26, 4:27, 5:1-2) says that belief is greater than knowledge. To a large degree, this debate has become academic.

The Medieval proofs for belief, their paths to knowledge, do not convince people anymore. Rav Sa’adia Gaon and Rabbenu Bachya use Kalam philosophy to prove God’s existence while Rambam uses Neo-Aristotelian physics and philosophy. Either way, physics and philosophy have changed dramatically, rendering those proofs obsolete. Philosophers of the eighteenth century posed many challenges to this entire enterprise of religious proofs, which only began recovering over the past 50 years.

Today, in the Post-Modern world, many believe that nothing at all can be proven. Every proof, every field of knowledge — not just religion — requires unproven assumptions and modes of thought. We might be able to prove things to our satisfaction but ultimately the idea rests on a belief that we consider justified if unproven. If nothing can be proven conclusively, according to Rav Heller’s and Rav Kafach’s understanding of the Rambam, how do we fulfill the mitzvah to know that God exists?

The Rambam offers multiple reasons why most people refrain from studying philosophy (Moreh Nevukhim 1:34). Among them are the difficulty of the material and significant time necessary to comprehend the subject. Many people would spend their entire lives trying to master the preparatory material before even reaching the religious aspects. Rambam says that if we could not acquire these beliefs through tradition or simplifying parables, most people would die without ever knowing that God exists.

It could be that we live in a time in which almost everybody falls into the category of people unable to study philosophy, even philosophers. Because of the state of the field today, knowledge currently is unattainable unless you reject Modern and Post-Modern philosophy or are among the few who have mastered and moved beyond them. Rather, for the vast majority of people, faith through tradition or simplified parables and arguments are the only way to achieve belief and knowledge of God.

Rav Yosef Dov Soloveitchik, the Beis Ha-Levi (Al Ha-Torah, Bo s.v. ve-od ta’am la-zeh, p. 14a), distinguishes between belief and knowledge. He says that knowledge is what you can prove while belief is what you accept after you reach the limits of your intellect. We are commanded to believe even (or especially) that which we cannot prove.

Rav Soloveitchik adds that we cannot transfer belief to another person. We can explain knowledge and prove that it is correct. Tradition is a matter of faith, something we accept intuitively. He recommends praying for someone else to return to belief.

Perhaps another strategy lies in looking at the principle underlying faith in tradition — trust. In his letter on astrology, Rambam refers to tradition “from the prophets and the righteous.” We can only accept that tradition if we trust the righteous people of previous generations to honestly transmit their principled beliefs. If we distrust them, we will not take seriously their traditions.

In this way, the widespread cynicism that has overtaken all of Western civilization — not just our community — has spread distrust in tradition. If we believe that rabbis today are untrustworthy, how likely are we to trust rabbis of previous generations?

The path to faith is personal acquaintance with saintly rabbis. I was privileged to study with rabbis of impeccable integrity. Therefore, I can envision Rabbi Akiva Eiger and the Noda Bi-Yehudah (for example) as men who embodied truth. Too many people lack this trust in their own rabbis and teachers due either to unfortunate experiences (sometimes distorted in the perceptions of a young mind, sometimes all too real) or lack of access. They need to rebuild their trust through exposure to saintliness.

Reducing cynicism and focusing on the positive is something we can all do, each in our own way. Especially those people who find their own faith wavering, can attempt to change their own attitudes by focusing on judging favorably. In that sense, being dan le-khaf zekhus is a method for strengthening faith. If we can pierce through the cynicism, we can restore belief.