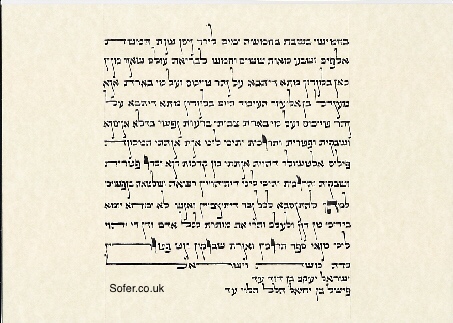 [Click for the audio version]   I find it hard to convey technical issues ofhalachah in a way that does them justice. That means that with all my efforts to randomize this selection process, we probably take up fewer such technical questions than are reflected in the responsa literature.Shu”t Yabi’a Omer 10; Even HaEzer 34, dated 24 Shevat 5743 (1983) helps us make up some of that deficiency because of its entertaining mix of the technical and personal.

One caution. Although it’s always true that I excerpt the responsa to be able to present them in the space available, it’s much truer here. R. Ovadya Yosef defended his claims with reams of sources I have elided to enable me to include this responsum at all.

The questioner was R. Shiloh Refael a rabbinical court judge in Jerusalem, who wrote to R. Yosef (his Hebrew Wikipedia entry tells us R. Yosef was one of the three rabbis who ordained him), to protest his av beit din, the head of his court. A Sephardi, that rabbi insisted on writing names in gittin (bills of divorce) with Sephardic spellings, even for Ashkenazic couples.

As an example of how the traditions differ, Sephardim write Golda with avav as the second letter, to reflect the osound, whereas Ashkenazic tradition wrote it in a Yiddish style, where analeph designates that sound. R. Yosef points out that the sefer Get Pashutmentioned a similar problem for Perla, where the ‘e’ should reflect an eh or aysound. Sephardim would put a yudthere, but Ashkenazim used an ayin, to help show the pronunciation of eh,Perla.

Get Pashut notes that Ashkenazim did so even after coming to Israel, when they built their own community [R. Yosef does not address it here, but this question continues in the background of our history: when and where should Jews meld into the existing community, and when must/ should/may they establish separate communities?].

Their separate tradition did not raise the worry that people would decide aget was invalid for its incorrect spelling, because the two communities were aware that the other had its own spellings.

Deciding on the Get-Writing Community

Get Pashut says that in any such two-community city, the get should follow the spelling tradition of the husband’s community. That’s true even if an Ashkenazi husband goes to a Sephardi court for the divorce, since the Torah speaks of the husband writing a sefer keritut, a book that cuts off the relationship. That supports R. Refael’s complaint about the head of his court.

One exception to that rule will lead R. Yosef to spurn R. Refael’s plea to reprimand the man for his high-handedness. Get Pashut does say that if an entire city is made up of Sephardim, with no separate community for the few scattered Ashkenazim, all gittinshould adopt Sephardic custom.

The Need for Proper Spelling in a Get

While it’s clear that Israel has separate communities of Ashkenazim and Sephardim, common written language is more unified. Put a get written with Ashkenazi styles of spelling before an ordinary Ashkenazi, and s/he will read it wrong, because laypeople no longer spell that way.

R. Yosef uses the name Golda as an example. Ashkenazi Haredi media wrote that name often, because Golda Meir was a prominent politician, and they used the Sephardic spelling. Over time, R. Yosef assumes, the spelling practice will switch over to the Sephardic one in all circles.  [That last line tips his hand somewhat; when the cases were reversed, he fought vigorously and adamantly for Sepahardi spellings, regardless of what “the street” held. It shows the challenge when popular practice shifts—those who theoretically hold that that should change the custom might still resist if it’s their custom being lost].

He adds a long comment about how the practice to rip up the actual document of divorce makes this topic less pressing, since people outside the court will not see the original spelling anyway.

He now tells us that when he was younger (in his thirties), he served on abeit din headed by R. Reuven Katz [he was also the grandfather in law of R. Shiloh Refael, so R. Yosef is telling this younger rabbi about an interaction he had with his late grandfather in law!], and a Sephardi couple came to the court to be divorced. The woman’s name was Rochelle, which R. Katz intended to write as Ashkenazim do, with an ayin for the soft ‘e’ in Rochelle. He says he stood in his way (set his face like hard stone, a phrase fromYeshayahu 50;7), because that would be invalid according to Sephardic custom, and they constitute a separate community.

R. Katz tried to convince him that this is how it’s always been done (by which he clearly meant within his memory and tradition of handling gittin in Israel, regardless of the couple’s origins); R. Yosef says he did not answer him, he showed him a sefer (Michtav Me-Eliyahu Alfandari) who wrote clearly that an ehor ey sound (like the ‘e’ in Rochelle) should be represented by a yod. That’s especially true for names of French origin (this sefer said), such as Rochelle.

R. Yosef adds that Maharam ibn Chaviv and Shu”t Chayyim Sha’al both ruled that we write names according to how they are pronounced in their language of origin. [So it’s not always “the street” that determines spelling; more, Golda is a name of Yiddish origin, I believe, so that R. Yosef’s own standards should have meant that we use the original Yiddish spelling. Also, note that the young R. Yosef was already comfortable going up against a much older Torah scholar, and engaged in the debate in a way that has some bite to it—he didn’tanswer his claim, he just showed himsefarim.]

He was more sympathetic to R. Refael’s complaints about the head of the court’s choice to write a get for a French Jew named Armand with a daled at the end. R. Refael objected that the name is pronounced with that ‘d’ left silent. Here, he had noted that R. Ovadya Yosef himself, in an earlier volume of Yabi’a Omer, had said much the same.

R. Yosef agrees, and says the head of the court needs to write the get as Arman in Hebrew letters, since that’s how it’s pronounced. He adds that in another responsum, he had pointed out that names with a doubled letter in their original language—Billy, Jimmy, Stella—are not written that way in a get,because people will think they are supposed to somehow double that sound.

He isn’t always strict about this, he says. When he was in Cairo, a get was sent from Paris with the husband’s name, Isidore, written with an aleph to reflect the ‘o’ (Ashkenazic custom). The Egyptian custom was to write that ‘o’ as a vav, but they accepted the get[perhaps because of the delay and cost of sending it back to Paris for a rewrite], because there was an Ashkenazic community in Cairo at the time, so that there were some local people who would read that get and understand the name correctly.

On the other hand, he once sat on a court that adjudicated a get from London, where the local court had written the man’s name, George, in the Ashkenazi way (daled zayin shin for the soft ‘g’ in George) as instructed by R. Yechezkel Abramsky, the head of their court. The Jerusalem court had in advance told them to write it in the Sephardic way, so they refused to deliver the get.

By this time, R. Abramsky had moved to Israel, so he sent for R. Waldenberg (who was heading the Jerusalem court, but was the much younger scholar), to find out why. R. Waldenberg explained that he was sitting on a court with two Sephardim, and they refused to have their tradition ignored for this Sephardi couple, so R. Abramsky relented. [R. Yosef does not explain why they could not have given the get once it had been written that way, since there were certainly Ashkenazim in Yerushalayim who could have read it correctly. It seems that there was an aspect of community protection, but then R. Refael is right that Ashkenazic couples should have their gttin written their way as well.]

When Get Writing Becomes Personal

He closes with one last story, from 1957, a day when R. Reuven Katz wasn’t feeling well. A divorcee from Iraq, whose ex-husband was still in Baghdad, was due to marry that day. The rabbi overseeing the wedding had forgotten to send her to a rabbinical court to verify the divorce, standard procedure to avoid problems down the road.

The other rabbi on the court, whom R. Yosef mentions by name, thought her ex-husband’s name had been written incorrectly. R. Yosef explained to him that the rabbi in Baghdad was a well-respected scholar, and the spelling followed Baghdadi pronunciation (he adds a slew of sources to prove that local pronunciation governs how we write names in a get).

This other rabbi refused to hear of it, refused to authorize her remarriage, despite her tearful pleas. Divorcees in her community were not seen as marriage material, she said, she had had much trouble finding a fiancé, and she feared that a delay, especially one that would cost them money on the wedding arrangements, would scotch the nuptials.

The other rabbi remained adamant, despite R. Yosef’s arguments on her behalf, and the poor woman left the court crying. The other rabbi had been convinced enough, however, that he went to Yerushalayim, where there was a Baghdadi émigré rabbi (in 1957, apparently, phone service was not good enough that he could call him). This Rabbi Aboudi confirmed that the name was written in accordance with Baghdadi pronunciation.

The rabbi returned to Petach Tikva, contrite, but R. Yosef tells us he refused to sit with him on a court any more, seeing how little the other man had trusted him. Only when R. Reuven Katz intervened to appease him did they call the woman back, and she then married.

[There’s too much in that story to discuss here, but I am most struck by his willingly including this detail— twenty-five years later, he is comfortable with his refusal to sit with that rabbi, even if it meant the woman would have to wait to remarry until another court could be convened].

He goes on at some length about the importance of realizing that writing names in gittin is a craft of its own, that one cannot simply consult a few books and decide one knows the laws.  But while people will read R. Ovadya Yosef when he goes on at such length, I do not have that luxury (how many of you have read this far?), so we’ll stop here, having been reminded of just some of the issues—pronunciation, location, community, and common reading—that affect how we write names in gittin.