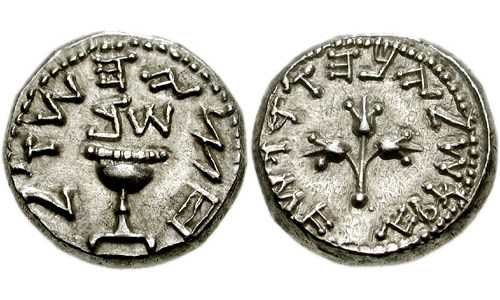 The beginning of Ki Tissa might be more familiar than most sections of the Torah, because it’s also the special reading for Parashat Shekalim (which, this year, was three weeks ago). Hashem tells Moshe to collect a half shekel “of the shekel hakodesh, the sanctified shekel.” Ramban makes two thought-provoking claims.

First, he says Moshe established this as coin for the Jewish people, since he was a great king. He adds that it was called a shekel to indicate that it had the exact weight of silver it claimed. The comment clearly reflects issues of Ramban’s time, when kings set and would debase (reduce the percentage of precious metal in) coins to save money in times of financial stress.

If the king issued coins with only three quarters as much precious metal, that was the coin (although it would be harder to use abroad), and the crown’s reserves were now worth all that much more.

He might be reading his cultural context into this passage, but I’m more interested in his comment that Moshe made these coins. Chazal say that Moshe was a king, so that’s not surprising; but since Hashem was shaping the Jewish nation in many other ways, I would have assumed (and would have thought Ramban would assume) that Hashem set theshekel. Particularly since it’s shekel hakodesh, the sanctified shekel (we’ll see how he understands that characterization in a moment).

Ramban assigns it to human agency. This is a tendency I noted in As If We Were There, that Ramban sometimes tends toward the naturalistic where the plainest sense of the text lends itself to the miraculous, and that despite his repeat insistence that all of existence is miraculous.

The Sanctity of Coins and Language

For hakodesh, sanctified, Ramban says that’s a function of these coins being used for sanctified purposes—when people promise certain values or generally donate money to the Temple, redeem their first born, and all other set amounts, they use these coins.

He says much the same about Hebrew’s title as lashon hakodesh, the sanctified language—it’s that it’s the language of Scripture, which means that’s how Hashem speaks to prophets and to the people, the language in which Names of Hashem are expressed, the language by which Hashem created the world, and named all that’s in it, including angels, heaven and earth, and humanity, including the greatest humans, such as the Avot, the Patriarchs.

That gets it almost exactly backwards from what I would have imagined. I’d have thought we’d say that Hashem chose to do all those actions in Hebrew because it is a special language, where Ramban seems to insist it only became special because Hashem used it for all those purposes. Hashem could equally have used English, Spanish, or Latin, Ramban seems to imply; because it was Hebrew, that became lashon hakodesh (I don’t mean we could switch—once Hashem created the world, gave the Torah, named angels, etc. in Hebrew, he likely thought it was now the only possible sanctified language. But it’s not inherent to Hebrew.)

That’s in explicit contrast to Rambam in Moreh Nevuchim III;8, who sees Hebrew as special for its delicacy, its lack of words for aspects of life we do not discuss in polite company. Rambam held there were no Hebrew words for genitalia or what comes out of them, only euphemisms.

That’s both unnecessary as a defense of Hebrew’s sanctity and untrue, says Ramban. We’ve already seen why he thought it was unnecessary; it’s untrue because we occasionally substitute a more gentle term for one written in Tanach, and the original word was also Hebrew. For example, Devarim 28;3 has the written word yishgalenah, which we read asyishkavenah, will bed her. Apparently, the original word was an indelicate way to express that idea. After offering other examples, he adds that were Rambam correct, we should call the language nekiyah, clean, not kodesh, sanctified.

The shekel shows Ramban at his practical best—Moshe Rabbenu coined it, more honestly than most kings, and coins and languages become sanctified by the uses to which they’re put rather than anything intrinsic to them.

The Call of the Artisan

Building a Mishkan required craftsmen of various sorts. To kick off the team, Hashem tells Moshe (31;2) that He has called Betzalel by name. Ramban thinks that’s telling Moshe that He has implanted in Betzalel the ability to oversee all the necessary crafts for this structure (later in Shemot, he says that about the other artisans of the Mishkan, they found themselves able to do what was needed—how that might be is captured well in Good Will Hunting (starting at 1:50), where Matt Damon’s character explains his genius).

Ramban here and later goes out of his way to stress that the Jews in Egypt were burdened with bricks and mortar construction, they never learned any metalworking or how to engrave gems, etc., did not even see it happening. With training and apprenticing, it takes years to learn those skills, but the desert Jews found themselves to contain a population that could do it off the bat.

Hashem had prepared these people ahead of time (Ramban cites Yeshayahu 41;4, which refers to Hashem as korei hadorot me-rosh, Who sets up the generations ahead of time), because He wanted a Mishkan in the desert. (Ramban does not make the point here, but that fits his view that a Mishkan was always part of the plan, not a reaction to the Golden Calf). Shemot Rabbah 40;2 times that back to Adam HaRishon, to whom Hashem showed every person of the future (and his/her role on earth), including Betzalel. Yirmiyahu too was born to his assigned task, was told that Hashem set his role before his formation in the womb.

This touches on questions of foreknowledge and freewill, but that’s not Ramban’s concern here. It is a good counterexample, however, to what we noted earlier. Here, Ramban reaches for the supernatural when he could have offered a simpler and more naturalistic one, had he only accepted the possibility that some Jews were owned by craftsmen and picked up those skills along the way. That would have negated or minimized the miraculous element in Betzalel and the other builders’ work on the Mishkan.

The Sin of the Golden Calf

I once wrote a short story fictionalizing the Golden Calf (“You Can’t Change Human Nature,” in Cassandra Misreads the Book of Samuel and Other Untold Tales of the Prophets). It was then that I first remember noticing that “only” 3000 Jews were killed by the Levi’im. [It seems like a small number compared to the 600,000 Jews of the time, but think about the reaction to 9/11, where about 3000 people died in a metropolitan area of millions].

The number of people killed might mislead us into thinking the sin was not national, but in 32;7, Hashem says the whole nation has gone astray. To Ramban, that refers to their loss of faith, their accepting that other powers than Hashem affect the world. Making the Calf, bowing to it, and sacrificing to it were the external manifestations of where the people had gone wrong, but Hashem knew their thoughts, where many more of them lost their awareness that only Hashem runs the world. They gave some vent to that when the whole nation donated golden nose rings for the Calf.

Neither that nor their thoughts were enough to be punished by the Levi’im, but it was more than enough for Hashem, a reminder that the privacy of our thoughts is no defense when it comes to our Creator. And that it was that which made the Golden Calf the national catastrophe it was.

If the Mishkan was a cooperative result of people giving coins that Moshe had set up, sanctified by the purposes to which people put them, as well as the literally God-given talents of Betzalel and his cohort of artisans, the Golden Calf was all on us, internally and externally. A lesson in where our religious life occurs, within, without, from Hashem directly and not.