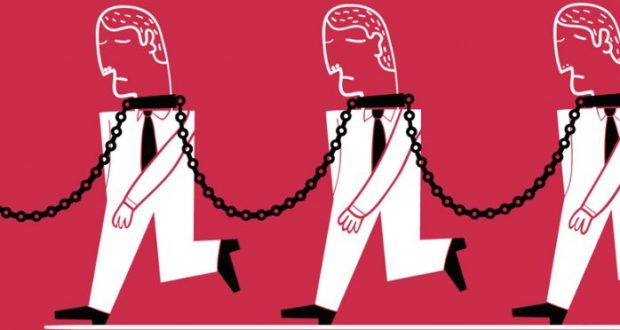 The Differences Between Employees and Slaves

13 Kislev: Chatam Sofer on the Differences Between Employees and Slaves

Judaism has a range of ways that one Jew can work for another.  An extreme version is an eved Ivri, which I translate as a Jewish indentured servant, where the Jew in some meaningful sense sells himself (or is sold) to an employer/master; a more ordinary arrangement is a sachir, a hired employee. Shu”t Chatam Sofer 5; Choshen Mishpat 172, dated 13 Kislev 5582 (1821), discusses the similarities and differences between the two institutions.

His starting point is a responsum of Maharam of Rothenburg, who argued that a sachir, an employee, must be able to quit in the middle of a contract, since even an eved Ivrihas the right and the power to pay off the rest of his purchase price and leave (with or without the consent of the master who purchased his indenture). If someone whose body is in many senses owned by the master during the period of the indenture can force termination of the agreement, an ordinary employee should all the more so be able to do that.

Because the two institutions can verge on each other, a sachir may not enter a commitment of longer than three years, since after that it blurs too much with avdut, indentured servitude (later in the responsum, Chatam Sofer makes clear that it’s not that it becomes indentured servitude, it’s that it looks too similar).

Maharam says that all leniencies of an eved Ivri must apply to an employee, because usually an eved has violated the Torah (either he stole something and was sold to pay it back, or he sold himself when he was not poor enough to allow for that; Chatam Sofer does mention that Rambam and Shach permitted a completely impoverished person to sell himself). The employee has done nothing wrong, so whatever is lenient about the eved must be so for the sachir.

Choshen Mishpat 333;3 codifies that paradigm. An employee can quit in the middle of a job even if he got paid upfront and cannot pay it back right now (an eved Ivri can only force his freedom by paying out the rest of his contract; Chatam Sofer does not make a point of it, but if the ordinary employee damages the employer by leaving early, he may need to compensate the owner for that).

Problems in the Parallel

Tosafot Baba Metzia 10a explains that avdut is frowned upon because it’s irreversible (other than the eved finding a way to buy himself out, which isn’t so easy—had he had money, he wouldn’t have gotten into this situation at all), and requires a shetar shichrur, a document of release, from the owner. In those senses, he’s taking on a master other than Hashem, contra the verse.

None of that is true for a hired hand, so there’s no problem with employment contracts.

Chatam Sofer struggles with Tosafot’s reasoning, because we do extrapolate some ideas—such as the right to terminate the agreement—from an eved to an employee. Either the ability of the two kinds of workers is similar or it isn’t; if it’s not, how can we deduce one from the other, and if they are similar, why doesn’t the eved’s right to pay off his contract and leave (with or without the master’s consent) mean that he, too, is allowed to voluntarily take on such an indenture?

Maybe It’s Learned From the Verse

One option might be to argue (as Chatam Sofer thinks Maharam’s language implies) that the rules about the employee stem from the verse, not a comparison to a slave. Perhaps the Torah views all employment as having some characteristics of avdut (although if that were true, it should mean that an ordinary employee is also considered bodily owned by the employer for the period of employment).

It was to answer that claim that Maharam explained that if the employee were more restricted than an eved, the employee would be more of a slave than a slave, which is unthinkable.

Ways We May Treat the Employee Worse Than an Eved

I am largely skipping a section in which Chatam Sofer argues that true slavery is where a Jew sells himself to a non-Jew. In his view, a master pierces the ear of a slave who chooses to continue beyond the original six years because the slave professes his love for the non-Jewess with whom the master mated him. That is similar to selling himself to a non-Jew in the first place, and violates ki Li Benei Yisrael avadim, the Children of Israel are slaves to Me.

Magen Avraham 169;1 points out that we do sometimes treat employees less well than avadim, which seems to ruin the argument we’ve been making. Shulchan Aruch required giving some of any food that has an aroma to our slaves immediately, and recommended giving each type of food to the slave.

Magen Avraham permitted making a stipulation that an employee would not have that right. Similarly, one can agree with an employee that he will perform acts of service the Torah forbids for an eved Ivri, such as carrying our clothes and other necessities to the bathhouse and putting our shoes on for us (these acts of servitude violate the prohibition of not working our fellow Jews as full slaves; since our employees aren’t slaves, those acts are not in fact prohibited).

That’s possible because the employees are otherwise so clearly not slaves, such as in the fact that they never accept a term of employment for more than three years, according to Maharam. Tosafot disagreed, because the employee needs no shetar shichrur, no document of release, which is enough to make clear that he’s not a slave [I think for many years, the practice was for Jews, especially rabbis, not to accept employment for longer than six years, the full term of an eved Ivri, although they later started accepting lifetime contracts].

Chatam Sofer thought that any sorts of fines or obligations to repay up front in employment contracts makes it too similar to eved Ivri. I note that this seems to worry him only in contracts of more than three years, since those are the ones that look like indentured servitude. A job for a year with the need to repay if he left early does not botherChatam Sofer.

Applying It to Rabbis

At the very end of the responsum, he points out that this has ramifications for rabbis. Hagahot Mordechai and Shach thought that an employee was not allowed to live solely with the employer and eat at his table (that looks too much like a slave, relinquishes too much of his independence).

Chatam Sofer’s correspondent seems to have argued that that wouldn’t apply to a town’s rabbi, because he has his own house and table. Chatam Sofer disagrees, because the Jews of the town provide the house and the salary, and they are partners in his employment. Functionally, it’s as if he’s eating at their table every meal [he means that the problem with eating at the employer’s table isn’t the physical presence of the employer, it’s the dependency].

Nor is the quality of the food the issue, since Shlomo HaMelech’s slaves ate the rich food from his table. [I think he’s focused on rabbis because all the townspeople are his employers; most employees take their salary and go to other people to buy goods and services. This obviously creates issues for live-in Jewish employees, but Chatam Sofer does not elaborate on that].

The way out is for the contract to stipulate that the rabbi can leave whenever he wants to. The community can include a noncompete agreement, that he may not be rabbi elsewhere unless he return some money to them. But if he wants to leave and become a private citizen, they have to allow that as a possibility. Because Jews are not supposed to be slaves—which is fundamentally defined by the inability to leave– to anyone other than Hashem.