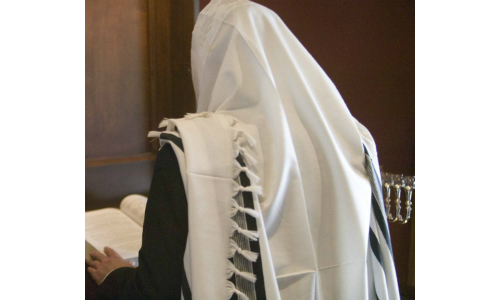 Mussaf with a Minyan or Shacharit First

28 Cheshvan: R. Moshe Feinstein on Mussaf with a Minyan or Shacharit First

There may be people who have never come late to shul; for the rest of us, hard questions arise. Shu”t Iggerot Moshe Orach Chayyim 4;68, dated 28 Marcheshvan 5750 (1979), deals with a person who comes to shul when the community is already up to Mussaf, the additional prayer on Shabbat and holidays. Should s/he pray with the community and leave Shacharit, the morning prayer, for later, or pray in the usual order, first Shacharit, then Mussaf?

The push to say Mussaf is that the person will gain tefillah be-tzibbur, prayer with a community, but Shacharit is tadir, more often said, which brings up the rule tadir ve-she-eino tadir, when we have two practices, one more common than the other, we do that one first.

The Priority of the Morning Daily Sacrifice

R. Feinstein starts by turning to the world of sacrifice for guidance, since prayers replace our missing communal sacrifices in the Temple. Pesachim 58b cites a verse (ve-arach aleha ha-olah, he shall arrange on it the olah, which the Gemara takes to mean the sacrifice more prominent than all others, the daily burnt offering) to show that that morning offering should precede all others. A similar verse shows that the afternoon daily offering should be the last item on almost all days (the fourteenth of Nisan is a notable exception, due to another verse placing the Pesach sacrifice even later in the day than the daily offerings).

That Gemara seems to use reasoning other than tadir ve-she-eino tadir to support the idea that daily offerings should be first and last. Zevachim 89a, on the other hand, cites the verse “milevad olat haboker, aside from the morning burnt-offering…” to prove that the Mussaf sacrifice must come after the morning one, and the Mishnah understands that as in fact a matter of tadir ve-she-eino tadir. That reasoning also applies to putting Shabbat Mussaf before the Rosh Chodesh one, etc. Tosafot also noted that the verse says the morning sacrifice is offered ba-boker, in the morning, where the additional sacrifice is described as being bayom, in the day.

R. Feinstein thinks these are actually three different halachot, but we need not tease them apart here, because what he means to infer for our purposes is that Shacharit coming first has more backing than the value achieved by tefillah be-tzibbur, praying with a community.

The premise of the question was that being able to pray with a community might outweigh the tadir principle, but R. Feinstein thinks that itself is not obvious. Tur Orach Chayyim 286 discusses problems that arise when a community does not finish Shacharit on Yom Kippur until the afternoon (that means that Shacharit alone took up more than half the daylight hours of that day, which is at least 12:30!). Tosafot held that since it’s possible to say Minchah, which is also the tadir, the more regularly recited prayer, that should go first, but Rambam worried changing that order would lead to mistakes in the future (he agreed in principle, but thought that people would not understand the reason for the change and misapply it to other situations).

Tur reports that his father, Rosh, would say Mussaf in private, before the community finished Shacharit, so that when they said Mussaf (following Rambam), he did not run into the problem of needing to say Minchah first. He clearly accepted Tosafot’s view, but could not (or did not want to) stop the community from following Rambam. It shows thattadir is a powerful enough idea (according to Rosh) to forego being able to pray with the community.

Shacharit has an even stronger claim to be said before Mussaf, since Yerushalmi records views that the correct time for Minchah is later than early afternoon (that it should not be said until minchah ketanah, which starts about two and a half hours before sunset, with an “hour” meaning one-twelfth of that day’s daylight). It’s true that we do not accept that view, but it weakens the extent to which Minchah that early in the day is more tadir than Mussaf.

On the other hand, complicating our calculus further, the principle of tadir is Biblical, whereas the interest in praying with a community is Rabbinic.

Separating from the Community for a Better Prayer

None of us would or should adopt Rosh’s practice (nor does Tur recommend it), because it would look arrogant, it would look as if we are so confident of our general righteousness that we need to separate ourselves from the community to pray in the right order. Few of us, also, have a private space in which to pray, which also inhibits our adopting his practice—to stray from the community in a way they will see is also incorrect, because it creates division.

We would sometimes daven to ourselves, even in front of a community, but that’s when they’re doing something egregiously wrong, such as reaching a prayer only after its designated time. But here, Rambam gave explicit permission to say Mussaf before Mincha, so we cannot deviate. Rosh either had a private space to pray, so the community wouldn’t see what he was doing, or it didn’t count as arrogance, since he was known as a Torah giant (that’s a topic of interest to me, when people are allowed to act certain ways because of their greatness, without it constituting arrogance or even a lack of humility that they assert that fact about themselves; this is not the only example, even as I suspect most people would be offended by anyone who today acted on some such privilege of the great, no matter how justified).

But the fundamental principle remains, that tadir alone should be good enough to say Shacharit first, even at the loss of tefillah be-tzibbur.

R. Feinstein says that he had been shown that R. Yitzchak Elchanan Spektor wrote, in Be’er Yitzchak, that prayer with the community was more important, because it rendered one mekudash, more sanctified. He supported this claim with examples of where halachah works to foster prayer with a community—one must travel up to four mil (8000amot, around 2 ½-3 miles) in the same direction one is already going, or one mil backwards, to pray with a community, and Magen Avraham and Chavot Yair allowed making an eruv to make it possible to do so as well.

R. Feinstein is not convinced that that proves that you’re a mekudash (and, to boot, he doesn’t think the law is clear that mekudash outweighs the value of tadir); those pushes for communal prayer are because that prayer is more effective, and might not speak to making the person more mekudash. Besides, as we’ve seen, R. Feinstein thought there were two other reasons Shacharit had to come first.

Sum total, it’s Shacharit first, even alone, and then Mussaf, according to R. Moshe Feinstein.