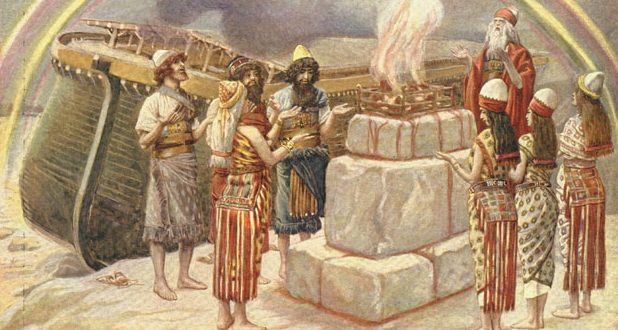 From a philosophical perspective, why did Noach bring sacrifices?

Rambam (Moreh Nevukhim 3:32) famously argues that a primary reason for animal sacrifice was to wean the Jewish people from idolatry. Rather than sacrifice animals to idols, they could only offer sacrifices to God in a specific place for specific reasons.

Ramban (Lev. 1:9) vehemently objects. He points out that, according to Rambam, sacrifices have no inherent value. Yet the Bible seems to contradict that in a number of places. Most importantly, it renders the sacred acts a meaningless ruse. Rather, Ramban contends, sacrifices have great importance to each individual, reminding sinners of the severity of their transgressions. Why, asks Ramban, did Noach offer sacrifices? If God wants to wean people from idolatry, Noach has already rejected it.

Ritva (Sefer Ha-Zikaron, ch. 9) responds to Ramban’s objections on multiple levels. From a textual perspective, he points out that Ramban quotes from the wrong place in Moreh Nevukhim. Beyond that, he responds to Ramban’s detailed concerns. Regarding Noach’s sacrifices, Ritva suggests that Noach’s counterparts worshipped idols by offering animal sacrifices. Recognizing God as the only power, Noach directed that service to God rather than to idols. In doing so, he anticipated the Torah’s attempt to direct similarly the Jewish people’s worship away from God and toward idols.

Abarbanel (Introduction to Lev., p. 12) writes that Noach burned animals as sacrifices to God as a form of self-sacrifice. He burned the various parts of the animals’ bodies as if he was offering his own limbs, blood and soul. (As an alternative, he suggests the same as the Ritva above.)

More recently, Rav Yosef Shaul Nathanson (Divrei Shaul, Gen. 8:20) connects Noach’s sacrifices to his divine permission to eat meat. Rambam (Moreh Nevukhim 3:39) explains that bikkurim, the first fruits, are brought to the Temple because all first things should be sanctified and given to God (or the priests). Rambam explains that this is intended to instill in people the traits of generosity and patience, particularly when it comes to physical desires. Similarly, when Noach finally had the opportunity to eat meat, he delayed that gratification by first offering it to God.

According to Ritva, Noach was reaching out to God in what was then the standard form of worship. According to Abarbanel, Noach was sending a message of contrition and humility. While according to Rav Nathanson, Noach was delaying gratification and thanking God.