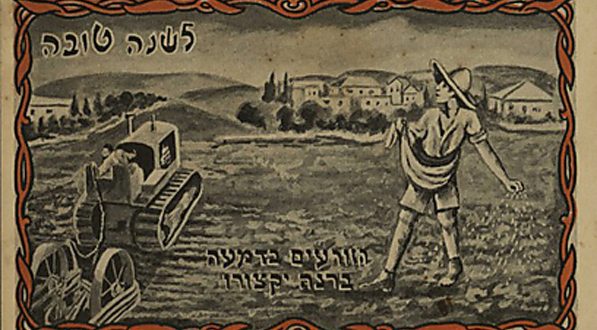 The heter mechirah is an halachic solution to the quandary of how to handle shemittah in times when farmers feel they cannot financially forego an entire year’s crop. Today, the issue raises religious, political, and economic questions, which are far beyond our purview here; but in 5656 (1895-96), a shemittah year, R. Yitzchak Elchanan Spektor was asked about this idea.

Before we get to him, let’s remind ourselves that in the late 1800s, the Jewish community of Israel was barely fledgling (good figures are hard to come by, but it seems that in 1890, there were 43,000 Jews in Israel, and by 1914, there were 60,000). Part of the puzzle in our times is whether the factors that led to R. Yitzchak Elchanan Spektor and other important (and very traditional) rabbis to sign on to lenient rulings still apply, when Israel is (thank Gd) blessed with many more Jews, and an overall better economy.

R. Spektor Is Asked to Reratify His Heter

In the previous shemittah, R. Spektor had signed on to a rabbinic agreement that the Jews of Israel could sell the Land to a non-Jew, thus rending it “not Israel” for the purposes of shemittah [I add that this is all based on the assumption that shemittah in our times is a Rabbinic rather than Biblical obligation; should that change—such as when the majority of world Jewry resides in Israel, which demographers now believe will happen in the next 20-30 years, if not sooner, the halachic analysis will change significantly].

When he was asked about it again, one of the letters he wrote was dated 20 Tishrei, 5656, and is printed in Shu”t R. Yitzchak Elchanan Michtavim 12. To get a fuller sense of that letter, though, let’s look at letters 5, 10 and 11. Letter 5, the editors of the volume tell us, wasn’t published at the time. It is the one in which R. Yitzchak Elchanan originally agreed to selling Israel, once other important rabbis joined that heter. But it was not as lenient as the rabbis in Israel had hoped (we’ll see the conditions he set in a moment), so it was not published; in 1946, R. Shlomo Zalman Auerbach zt”l published it in his work on agricultural halachah, Ma’adanei Eretz.

Letter 10 is addressed to Abraham Greenberg, who headed the executive committee of Hovevei Zion after Leon Pinsker’s passing. The editor’s notes point out that back in 5648, R. Spektor had made clear that the permit to sell Israel was a hora’at sha’ah, a ruling that applied only to those circumstances and that time.

As 5656 approached, the Hovevei Zion (who were doing heroic work to encourage Jewish return and resettlement of Israel) and Baron Rothschild (who funded much of it) turned to R. Spektor to repeat his ruling (since the economic situation had not yet improved sufficiently for farmers to observe shemittah).

R. Spektor wrote two almost identical letters, both dated 21 Sivan 5655, to Greenberg and to Eliyahu Scheid (whom the editor identifies as the overseer of Baron Rothschild’s settlements in Israel). R. Spektor notes that he had allowed selling orchards, fields, and fruit trees [not the whole of Israel, apparently] for two years—the shemittah year and the year after [because shemittah applies to produce which grows in that year; some crops don’t come to harvest until well into the next year, but still count as shemittah produce.]

He and the rabbis who joined him had also insisted that the land be sold to Muslims [I think to avoid having to weigh in on whether and which Christians count as idolaters, to whom we may not sell the Land], and that it be done with as many forms of acquisition as possible [as we do when we sell chametz to a non-Jew before Pesach, since there is much halachic debate about what forms of acquisition are effective when Jews sell items to non-Jews].

Further, even after selling the land, they permitted only non-Jews to farm it in ways the Torah says may not be done during a shemittah year [this limits the value of the heter, since it gives some or much of the economic benefit of still being allowed to work the land to non-Jews]. Impoverished Jews (who needed this heter to save their livelihood) could rely on the sale to work the land in ways prohibited at a derabbanan level. Which practices are which he left up to the Jerusalem beit din (Sephardic or Ashkenazic) to define.

Yielding to Force of Circumstance

In the intervening years, the Jewish population of Israel has grown, but Hashem has not yet brought full bounty to the Land, so that the issue is still one of life and death for the poor. R. Spektor agrees that the same rules can apply to this coming shemittah—sell it to Muslims, have non-Jewish workers perform all Biblical acts of agriculture, and let the Jews who need this for their livelihood do all the work prohibited Rabbinically.

He once again limits this to the coming shemittah year. [He didn’t know it at the time, but over a century later, we see that that heter gets re-confirmed every seven years. In some years, such as in much of R. Kook’s time, the economic pressure was still so great that it was reasonable to see it as functionally the same. As the shemittot roll by, and (thank Gd!) Israel’s financial situation improves, the question becomes thornier.

If farmers always feel they are in life and death economic danger, what does that mean? When Chazal said to keep shemittah even after Israeli Jews were a minority of world Jewry, how much richer were those farmers? That doesn’t prove any point, but it raises a question].

The Rabbis of Israel Weigh In

Letter 12 cracks a window on some behind the scenes tensions around the issue. A R. Naftali Hertz HaLevi, the head of the Rabbinic court in Yaffo, had come up with a new idea. He suggested that Jews could sell their trees to non-Jews, with the condition that the non-Jews should cut down or uproot them (a condition the non-Jew will ignore once he’s agreed to it; there’s a certain winking element here, but the responsum in front of us doesn’t discuss when we allow halachic legal fictions, so we will have to leave that for another time).

His son-in-law, who first published his letter to R. Yitzchak Elchanan, notes that the idea found favor with the rabbis of Jerusalem, including R. Yehoshu’a Leib Diskin (an important European rabbi who had moved to Israel in 1878). The rabbis of Israel had therefore written to R. Yitzchak Elchanan, asking him not to mix in (since his leniency is now more of a stringency).

R. Naftali Hertz HaLevi wrote a personal letter as well, asking him to stay out of the matter. With the arrival of a senior scholar such as R. Yehoshu’a Leib Diskin, Israel had sufficient rabbinic authorities to deal with their own concerns, and it was no longer R. Spektor’s place to weigh in. The son-in-law notes that in the end, everyone followed this ruling, not R. Spektor’s.

But R. Spektor’s answer was dated 20 Tishrei 5656 (1895), the reason I could include this topic here [Chol HaMoed is a hard time, since few respondents choose to write responsa then]. The letter itself is banal, R. Spektor protesting that he had done nothing new, he had just recertified his earlier heter, with no new information [although, since this R. Naftali had himself come up with a leniency, staying firm in one’s prior ruling is in fact new information.

R. Spektor’s saying he hadn’t also seems to me to sidestep the issue, which was that he was being asked to refrain from weighing in on an issue that was outside his geographic jurisdiction. There seems to me to be an element of territorialism here; the most generous way to read it is that R. Spektor had been asked for his opinion the previous Sivan, had not realized the rabbis of Israel had their own idea, and wasn’t interested or willing to retract what he had said.]

In the early days of resettling Israel, there were many challenges, technical, agricultural, financial, medical, and more. Watching Jews struggle with them, and watching rabbis seek ways to help them in their struggles, is a reminder of just what it took to be part of that group that started the ball rolling on what we have and continue to build (with Hashem’s help) in Israel.

2017-10-11
Gidon Rothstein
Previous: Four Died Because of the Advice of the Snake
Next: Daily Reyd