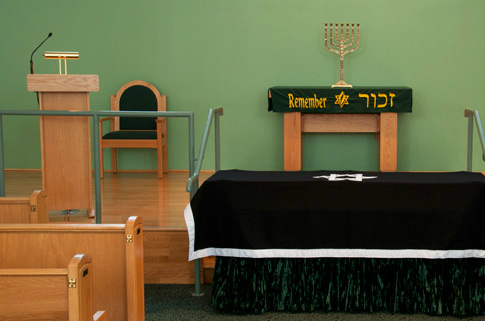 Eulogies Past the First Year

Mourning and eulogies are both a personal and public process. As a personal matter, speaking about someone who passed away can be cathartic, as well as edifying for those who may not have known the deceased. Shu”t Aseh Lech Rav 8;67—dated 17 Elul 5786 (1985)–reminds us that there are other issues as well.

The date was that of a ceremony at Yeshivat Har Etzion to celebrate the opening of the section of the Yeshiva library made up of the personal library of R. Yissachar Tamar. (I was at Yeshivat Har Etzion that year but, embarrassingly, have no memory of the event. The Yeshivat Har Etzion website describes R. Tamar as a significant Torah scholar, for many years a member of the Chief Rabbinate Council of Tel Aviv. His particular interest was the Yerushalmi, on which he wrote a seven-volume commentary titled Alei Tamar. To keep his memory alive, the family donated his 8000-volume library—including many ancient and rare books—to Yeshivat Har Etzion.)

R. Hayyim David Halevy, the longtime Chief Rabbi of Tel Aviv, spoke at the occasion. He opened by noting that had been asked to address aspects of R. Tamar’s personality and his contributions as a rabbi and Torah scholar. This was a bit of a problem because Yoreh De’ah 344 defines a eulogy as “mentioning the deceased’s good character traits, exaggerating a bit; for a Torah scholar or particularly pious person, the eulogizer would also mention their wisdom and acts of piety.”

Mo’ed Katan 27b tells us eulogies are only appropriate during the week of shiva, and for Torah scholars for up to twelve months, a rule included in Yoreh De’ah 394. The Gemara inferred that longer period for a Torah scholar from the fact that Ketubbot 103b tells us that after R. Yehudah HaNasi’s passing, he was eulogized day and night for thirty days, and then either day or night throughout the year.

Because of that, R. Halevy has always strenuously avoided giving talks that look to capture a person’s essence more than a year after that person’s passing. (There are other ways to see a talk about a great person, as R. Halevy will get to.) His great admiration for R. Tamar is leading him to push himself to find the reason he can do so, which the rest of this responsum lays out.

(There is what to talk about when people investigate halachic sources with an agenda in mind. In the hands of a lesser scholar, it can heighten the possibility that scholar will be prone to read sources in a way that support the conclusion he wants. On the positive side, a great man’s readiness to find ways to allow himself to set aside a longstanding personal practice, taken up on principle, is a marker of generosity of spirit I find admirable.)

In Beit Yosef Yoreh De’ah 344, R. Yosef Karo had quoted the Kol Bo in the name of Behag that we do not eulogize after a year, since after that point, the soul has risen and no longer descends. Behag does allow mentioning the deceased. When the deceased is first buried in a house or other above-ground structure and then (after full decay) re-interred in a cemetery, a eulogy is allowed at that second burial even after twelve months.

R. Halevy understands the idea about the soul going up and not coming down to mean there’s no more value to a eulogy, since one of the points of it is to bring some serenity to the soul of the deceased. According to that, there wouldn’t seem to be a reason to prohibit eulogies, although Kol Bo only allows mentioning the deceased.

The Soul’s Connection to the Body

More of a reason to say we should not eulogize people after twelve months can be found in the Zohar’s reading of Kol Bo’s Talmudic source, Shabbat 152b. The Gemara said that after twelve months, the body is fully decayed, so the soul rises to heaven and does not return. (That sounds like the reason to stop eulogizing is that eulogies only apply when the body and soul are still somehow linked; even then, it would not promote refraining from eulogies, unless we think the eulogy draws the soul down to hear, without a body to which to connect.)

The Zohar linked those descents to punishment the soul was receiving (which would make sense to connect to the body, since the two sinned together), and punishment ends after twelve months. Yet the Zohar recognized other reasons for the soul to descend as well, including that people are studying novel ideas in Torah that person articulated. That offers some valid reason to eulogize the person (or, at least, mention his Torah ideas) even after twelve months.

Ba”ch quoted Ramban from Torat haAdam, who quoted R. Natronai Gaon as sourcing this rule in the Gemara’s assumption that deceased people aren’t forgotten from the soul until twelve months. [I’m pretty sure he means the intense memory, that brings great sadness, doesn’t last beyond a year—he cannot mean we all forget the deceased after twelve months, since it’s obviously untrue.  In our days, some people experience complicated grief that goes on longer, but that’s not our issue. Ordinary mourning involves a lessening of the presence of the deceased in our lives; R. Natronai is saying that to revivify that memory, and therefore the pain of that loss, isn’t appropriate].

He goes a step further, to say that far-off places, where the news only arrived after a year, would be exempt from eulogizing the person. (The implication is they shouldn’t, although it doesn’t quite follow, because his reasoning would seem to apply only to those who already heard of the person’s passing. The year of forgetting would have seemed to me to mean from the time one heard about it, but that’s not how R. Natronai is taking it.

Possibly, he means that after a year, some metaphysical force reduces the intense memory of this person throughout the world. That might connect to Rashi to Bereshit 37;35, who says Ya’akov could not be comforted for the loss of Yosef because comfort only works for those actually deceased. There’s much to discuss about that, but perhaps R. Natronai would have taken that idea to mean also that the deceased necessarily start being forgotten.

The other idea that occurs to me is from Berachot 58b, where R. Yehoshu’a b. Levi says that we say a shehechiyanu if we see a friend after thirty days’ absence; after a year or more, we say mechayeh hametim, which somewhat implies that after a year, people become sort of dead to us. If so, R. Natronai could say that if the news of this person’s passing only arrived after a year, there is no intense memory anymore anyway, and therefore recreating that experience through a eulogy isn’t the right course of action.)

R. Halevy highlights Ramban’s wording, that there’s no obligation, which tells him that it might be allowed, especially if he incorporates quotations of this deceased scholar’s Torah ideas.

Finally, R. Halevy quotes R. Ovadyah Hedayah, Shu”t Yaskil Avdi 7 Orach Chayyim 44, that the problem with eulogies after a year apply only to ordinary people. For Torah scholars a passage in Tanna de-Bei Eliyahu Zuta 16 says that when an irreplaceable Torah scholar passes away (where the community has no one just like that Torah scholar, which is true of almost all great scholars), all Jews should bemoan that forever.  R. Halevy recognizes there’s room to discuss/analyze/ debate R. Hedayah’s claim, but accepts the underlying idea that if the talk is not intended to eulogize but is focused on the Torah wisdom we lost, that’s allowed even after twelve months.

The Most Obvious Answer Comes Last, Easily Dispensed With

The last hurdle is that Mo’ed Katan says the reason not to eulogize past the points it set were that Hashem says “you aren’t any more compassionate than Me,” meaning that we cannot be seen as mourning or complaining about the loss of this person.

That’s true of eulogies, which are given in a vein of arousing sadness and even crying in the assemblage. When the goal is just remembering the person and his contributions to the world (memories that might bring a fond smile rather than a burst of tears, for example), that doesn’t seem to run afoul of any prohibitions.

All of that was true of R. Tamar, he says, a Torah scholar who really wasn’t replaceable (in the Hebrew, there’s a bit of a pun, because replaceable is temurato, one to stand in for him, so R. Halevy wrote that R. Tamar is a Torah scholar for whom we do not have temurato). He’ll outline some of that, all by quoting from his various writing and talks; that’s not eulogizing, it’s sharing Torah, and the best way to recognize someone is to consult their writings.

He does not tell us those ideas in the responsum, I guess because those weren’t the halachic issue he was addressing, which was whether and how to speak about someone who is deceased when more than a year has gone by. A problem he had always avoided, but which this dedication led him to rethink and reconsider.