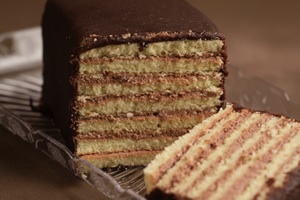 Do women have to say kiddush in shul after Shabbos morning services? For a variety of reasons, often people do not hear the rabbi saying kiddush in shul. Since they are not allowed to eat until hearing kiddush, some bold individual has to take the initiative and recite kiddush. In shuls that have a separate kiddush area for women, what should women who have not heard kiddush do in order to eat?

Clearly, this is a time-bound positive obligation (mitzvas aseh she-ha-zeman gerama). Women are exempt from time-bound positive obligations. So may women eat without reciting kiddush? The Gemara (Berakhos 20b) explains that the obligation for kiddush comes from the Ten Commandments, the word “Zakhor,” obligating is to remember the Shabbos by sanctifying it. The version of the Ten Commandments in Devarim words this as “Shamor,” sanctifying Shabbos by observing it. Since women are obligated in Shamor, they also are obligated in Zakhor, which includes kiddush. Therefore, women have to say or hear kiddush, and may not eat before doing so.

Therefore, women can recite kiddush in the women’s section for themselves and other women. They do not have to wait for a man to say kiddush for them. At many kiddush celebrations, wine and grape juice are available for people to say their own kiddush. Women need to have access to wine made grape juice for the same reason.

Kiddush has to be part of a meal (Pesachim 101a). The Vilna Gaon follows the view that this meal has to include challah. According to this view, you may not eat at a kiddush celebrations in shul unless you wash on challah. The consensus follows the view of the Geonim that the meal can consist of baked grains such as cookies and cake (Shulchan Arukh, Orach Chaim 273:5; Mishnah Berurah 273:21-26). A minority opinion allows for the meal to consist of fruits, meat or fish but this can only be relied on by someone who is feeling a little unwell and has no baked goods available (Mishnah Berurah 273:26).

Therefore, women can only fulfill their obligation of kiddush if they also eat a “ke-zayis” of baked goods in a short time (it would take another full essay to define the size of a ke-zayis and the time in which to eat it). Sometimes, kiddush in a women’s section consists of salads. This is wrong for three reasons. First, women need to eat baked goods in order to fulfill their obligation of kiddush. This can mean cake and cookies but it can also mean pretzels and wafers and baked goods containing no sugar at all. Second, some women want to eat cholent and kugel. If the men are served that food, maybe women want it also. And third, men need salads also.

If everyone in your family hears or says kiddush in shul, do you have to repeat kiddush at home before your meal? According to most opinions, unless you eat challah at a kiddush, you have not had your second meal and must eat a meal with challah. That meal should begin with kiddush. This is the view of Rav Moshe Feinstein (Iggeros Moshe, Orach Chaim 4:63), Rav Yosef Eliyahu Henkin (Gevuros Eliyahu 1:83) and Rav Joseph B. Soloveitchik (quoted by Rav Hershel Schachter, Eretz Ha-Tzvi, p. 47).

Rav Shlomo Zalman Auerbach believes that what you eat at kiddush constitutes the second meal (quoted by Rav Avigdor Nebenzahl, Yerushalayim Be-Mo’adeha, Shabbos, vol. 2 pp. 114-115). Therefore, he encourages people to say the “mezonos” blessing on two pieces of cake (or cookies or crackers), just like we use two loaves of challah at a meal. Additionally, you do not have to repeat kiddush before lunch. Although Rav Auerbach personally said kiddush before lunch even if he recited it earlier at a kiddush celebration (Rav Nebenzahl, ibid., p. 124).

Normally, if you forget the “retzeih” addition to bentching (grace after meals) in the first two meals of Shabbos, you must repeat the entire prayer. However, if the kiddush celebration counts as a meal, then your subsequent lunch is the third meal. According to Rav Auerbach, if you forget “retzeih” at lunch after eating at a shul kiddush with the intent that it count as a meal, you need not repeat (Rav Nebenzahl, ibid., pp. 149-151). As noted above, Rav Moshe Feinstein and others disagreed. As always, ask your Rabbi and don’t rely on published halachic articles.