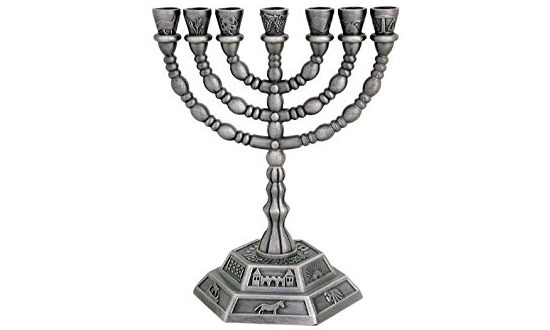 Electric Menorahs Throughout the Year

Around Chanukah time, we expect to see articles explaining why electric menorahs are invalid for the mitzvah of lighting Chanukah candles. However, a variation of that type of menorah raises a different question that reflects how we typically maintain memories of the destroyed Temple.

The Gemara (Rosh Hashanah 24a) learns from the verse “You shall not make with me gods of silver or gods of gold” (Ex. 20:20) that we are forbidden to make replicas of anything used to serve God. This includes replicas of the table or menorah in the Temple. The Gemara’s precise language is relevant:

Rav Yosef Kolon (Responsa Maharik, no. 75) deduces from Tosafos that even an inexact replica is forbidden if it looks like the original. However, Rashi (Avodah Zarah 43a sv. beis) says that a porch is only forbidden if it has the exact same measurements as the Temple’s hall — even a small change renders it permissible. Maharik suggests that Rashi only permits a porch that has slightly different measurements because such a porch is not an obvious replica of the Temple’s hall. After all, people build homes and porches all the time. However, a menorah is obviously patterned on the Temple utensil even if it has different measurements than the sacred menorah. (He adds that even if you disagree with this interpretation of Rashi, we should be strict because it is a debate between Rashi and Tosafos on a biblical mitzvah.)

Rav Tzvi Ashkenazi (Chakham Tzvi, no. 60) finds unconvincing Maharik’s dismissal of Rashi’s concern regarding a menorah. He argues that a menorah that is exactly like that of the Temple but of a different size is permissible. He further argues that Tosafos did not intend to forbid a porch even though it has only three walls. Rather, the numbers of walls don’t affect the permissibility because they aren’t part of the porch. Tosafos were merely explaining how someone could confuse a porch for the Temple hall.

The Temple menorah had cups, knobs and flowers (Ex. 25:31). Can you make a menorah replica with seven branches if you omit the cups, etc.? Maharik rules that any change that would invalidate the menorah for use in the Temple renders the replica permissible. The Gemara (Menachos 28a) says that a golden menorah must have the cups, etc. Otherwise it is invalid. However, a menorah of any other metal is valid even without cups, etc. Therefore, Maharik rules, followed by Shulchan Arukh (Yoreh De’ah 141:8), a golden replica of the menorah lacking cups, knobs and flowers is permissible because it is invalid for use in the Temple.

Rav Alexander Schorr (Bekhor Shor, Rosh Hashanah 24a) reads the Shulchan Arukh as ruling stricter than Maharik. According to Rav Schorr, the minutiae of Temple acceptability are irrelevant to the issue of replicas. Any replica that looks like a Temple version, more or less, is forbidden. If a silver, seven-branched menorah is forbidden because it looks like what was used in the Temple, so is a similar menorah made of gold. However, the Shakh (ad loc., 36) reads the Shulchan Arukh as agreeing with Maharik (see glosses of Rav Akiva Eiger, ad loc.).

Rav Yehudah Leib Graubart (Chavalim Ba-Ne’imim, vol. 3 no. 54) suggests that this debate revolves around the reason for the mitzvah. Is it because the broad prohibition against making idols extends to turning the Temple and its utensils into idols? As Rambam (Mishneh Torah, Hilkhos Avodah Zarah 1:1-2) explains that idolatry originated from a desire to serve that which serves God. Similarly, the Temple and its utensils serve God and may be mistakenly used as objects of worship. [1]I have greatly expanded Rav Graubart’s argument here. If so, only that which can be used in the Temple falls under the prohibition.

Alternatively, as Sefer Ha-Chinukh (254) suggests, the prohibition stems from the awe and respect we must show to the Temple. If it looks to the outsider like you are showing disrespect to the Temple’s utensils, you violate this prohibition regardless of the technical requirements of the utensils.

Underlying this suggestion is the method in which we show respect for the Temple. In today’s consumer economy, the approach to maintaining awareness is surrounding yourself with reminders. Visit; hang pictures in your home; make it your screensaver. In the halakhic tradition, we show respect by refraining from visiting and from mentioning. We do not say God’s name out of respect. Similarly, we do not own Temple replicas out of respect. Holiness comes from rarity and separation, not familiarity. I find this meaningful to the contemporary debate over visiting the Temple Mount.

As a further point, some authorities argue whether we are only forbidden from making these replicas but may purchase them if already made. Pischei Teshuvah (Yoreh De’ah 141:12) quotes Tiferes Le-Moshe as permitting. However, the Vilna Gaon (Bi’ur Ha-Gra 141:22) and Birkei Yosef (Yoreh De’ah 141:8) forbid owning Temple Replicas even if you did not make it. [2]See Darkhei Teshuvah 141:52.

In conclusion, according to Chakham Tzvi, you are allowed to use a seven-branched electric menorah because it is slightly different from the Temple menorah. According to Maharik and Bekhor Shor, this is forbidden. Rav Ovadiah Yosef (Yechaveh Da’as, vol. 3 no. 61) rules leniently. [3]Rav Yosef does not quote the Rav Graubart’s responsum. This is one of the rare times when I have found a source that Rav Yosef missed. I later saw that Rav Shlomo Zalman Braun quotes it in his … Continue reading